India’s science and technology research programs may see marginally more funding in 2018–19, according to Prime Minister Narendra Modi’s proposed budget. But the government is emphasizing programs focused on information technology and health care rather than basic science.

India’s inflation rate in November was 4.9%, according to the country’s Department of Economic Affairs. 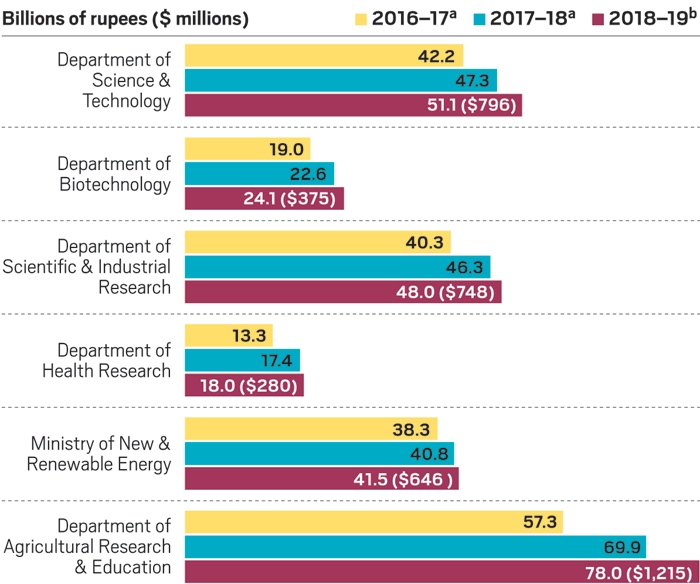 Although Prime Minister Modi's proposed budget shows increases for science across the board, levels likely will not keep up with inflation in some areas. a Actual. b Proposed; figures were converted from Indian rupees to U.S. dollars at the Feb. 5 exchange rate of $1.00 = 64.2 rupees.
Source: India Ministry of Finance

With the budget proposal, India’s government announced the launch of a mission on cyber physical systems, overseen by DST, to establish centers of excellence to train people in areas such as robotics, artificial intelligence, digital manufacturing, and big data analytics. The mission “will find applications in health care, water management, environmental control, and other areas,” DST Secretary Ashutosh Sharma says.

The government also announced the Prime Minister’s Research Fellowship for 1,000 undergraduate engineering students to pursue doctorates in premier institutes like the Indian Institutes of Technology and Indian Institute of Science. The aim of the program is to retain students in academia.

Reacting to the budget proposal, “The scientific community of India feels let down as none of the real necessities has been addressed,” says Soumitro Banerjee, general secretary of the nonprofit Breakthrough Science Society. “The director general of CSIR had declared a financial emergency last year because it had no money to fund research. The DST was unable to support research projects that were approved by expert committees. This crisis situation cannot be overcome with the level of funding provided.”

Krishna Ganesh, founding director of the Indian Institute of Science Education & Research, Tirupati and an editor of ACS Omega, agrees that the scientific community is discouraged and disillusioned by the proposed budget. “It is not just status quo but even falls short of keeping us where we were last year,” he says. ACS Omega and C&EN are published by the American Chemical Society.

Ganesh notes that scientific agencies have not been able to release funds for already approved projects for almost one year because of lack of funds. “Scientists’ frustrations and woes will continue this year,” Ganesh says. “Alarmingly, the capital allocations are so low that we cannot even hope to replace the outdated equipment, let alone upgrade with new ones.”

Another highlight of the budget, in addition to the cyber mission, was a health insurance scheme that aims to cover four out of 10 Indians. It proposes to offer health insurance up to $7,800 per family per year, covering about half a billion people.

The government’s economic assessment for 2017–18, released the same week as the proposed budget, says that India’s spending on R&D has been stagnant at 0.6–0.7% of gross domestic product in the past two decades. The assessment calls for doubling national expenditures in R&D. For the first time, a chapter titled “Transforming Science and Technology in India” was included in the report.

Research Funding
India set to boost science budgets
Research Funding
US academic research and development spending in 2018 by the numbers
Research Funding
India to set up National Research Foundation
Share X
To send an e-mail to multiple recipients, separate e-mail addresses with a comma, semicolon, or both.
Title: India’s science and technology funding raised marginally
Author: K. V. Venkatasubramanian, special to C&EN
Chemical & Engineering News will not share your email address with any other person or company.