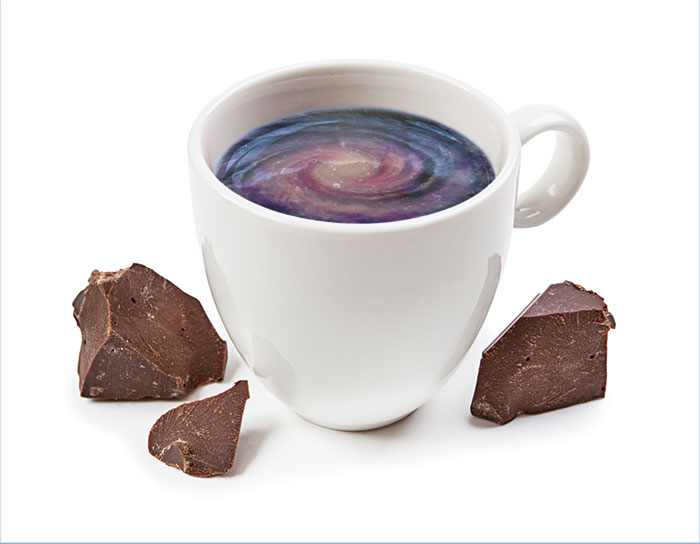 Chemists at the University of Hawaii, Manoa, have confirmed that Earthlings’ favorite food can be found in an unexpected place: outer space.

The team has identified the compounds that give chocolate its addictive flavor among the molecules that are likely formed in the interstellar medium (ChemPhysChem 2018, DOI: 10.1002/cphc.201701350).

UH Manoa chemistry graduate student Matthew Abplanalpwasn’t looking for a food fix when he started his research. His experiments examine the chemistry that happens in the icy solid phase of space, as opposed to the hot gas phase. “We are trying to fill in the gaps of what can’t be described fully by gas-phase processes,” Abplanalp tells Newscripts.

To do that, his team creates an Earth-bound replica of those icy conditions in a stainless steel chamber cooled to –268 °C. They deposit a frozen mixture similar to that found in space inside the vessel, seal it in a vacuum, then bombard it with energetic electrons to replicate the cosmic rays of space. Then they look at what molecules form as a result.

Chocolate flavonoids were among the complex molecules that they created in a recent experiment. It turns out some astronomers thought they had seen hints of these chocolate flavonoids before, but “it was a debate among astronomers as to whether they have been detected,” Abplanalp says. This work is the first time chocolate’s existence in space has been confirmed in Earth-bound experiments.

When Abplanalp first presented his findings, he says his lab mates were quick to volunteer to help. Who doesn’t want to look for chocolate in the Milky Way?

The complex molecules that the UH Manoa team finds will guide astronomers as they model the early universe. That includes figuring out which molecules might have been the precursors to the origins of life in the universe.

Abplanalp wouldn’t confirm that chocolate is essential to life. But anyone looking for an afternoon pick-me-up knows that it is. 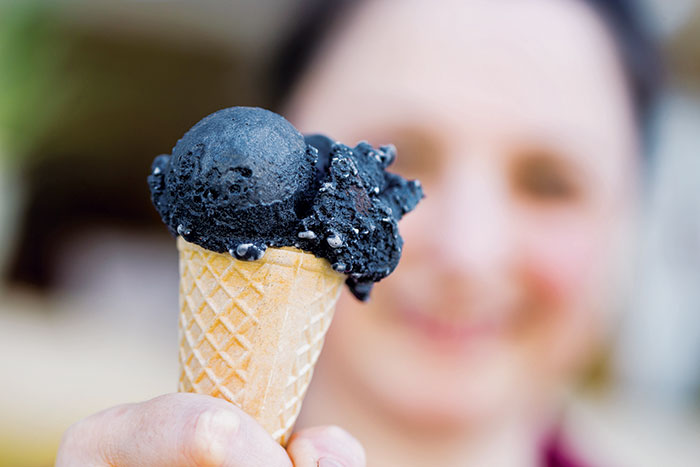 Chocolate compounds in space might be an exotic find, but chocolate in ice cream is pretty commonplace. Now, a new carbonaceous craze is taking over the world of frozen treats: activated charcoal in ice cream.

Customers of the New York City eatery Morgenstern’s Finest Ice Cream praise the store’s coconut ash ice cream that’s made with activated charcoal, and lines snake out the door and around the block for those eager to try it.

Chemists who use activated charcoal (also known as activated carbon) to filter volatile material might not look as favorably on the lab staple as a food ingredient. But its presence in ice cream is part of the black stuff’s emergence as a health supplement.

Claims on the internet suggest activated carbon can whiten teeth, alleviate bloating, and halt hangovers. But there is little research to back up most of those claims. It is occasionally used by medical professionals to treat drug overdoses, but never in ice cream form.

The only bodily change guaranteed to arise from eating activated charcoal ice cream from Morgenstern’s or anywhere else is black teeth. And that’s certainly not an evolutionary step forward, unlike chocolate.

Food
Baking, old and new
Safety
Making liquid-nitrogen ice cream safely
Materials
Where science meets snacks
Share X
To send an e-mail to multiple recipients, separate e-mail addresses with a comma, semicolon, or both.
Title: Sweets in an unexpected place and unexpected ingredients in sweets
Author: Andrea Widener
Chemical & Engineering News will not share your email address with any other person or company.