by Andrea Widener with contributions from Britt Erickson; Cheryl Hogue; and Jeff Johnson, special to C&EN

Science R&D was not expected to fare well in President Donald J. Trump’s spending proposal for 2019. But a last-minute congressional funding boost means the proposal is more mixed for science agencies.

The surprise additions to the budget would save basic science agencies from big cuts. Several, including NIH and NSF, are essentially flat. However, some agencies still face cuts of well over 30% for work on energy and environmental issues. 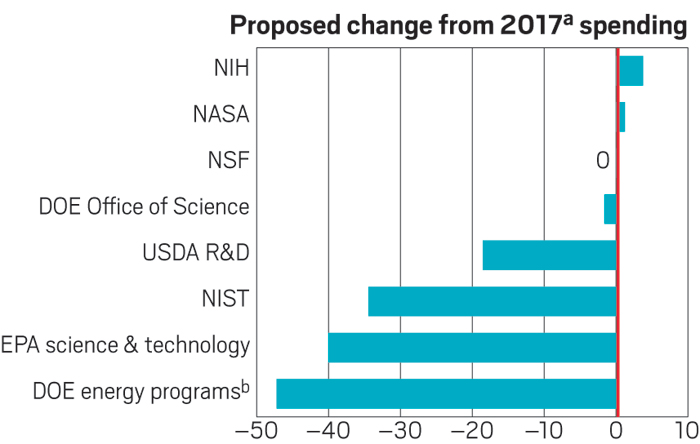 “We’re discouraged to see yet another White House proposal that indicates either the administration’s continued lack of understanding about the crucial benefits scientific research provides to Americans or, worse, their persistent disregard of the value of science to society,” says Christine McEntee, CEO of the American Geophysical Union, echoing the statements of many science supporters.

The administration had originally proposed cuts averaging over 20% for science. But days before the budget was to be released, Congress passed bipartisan legislation that sets higher spending limits for fiscal 2019 as well as for fiscal 2018, which Congress has not yet fully funded. The Trump administration responded by tacking an addendum onto its 2019 proposal that would provide more money to some agencies.

The proposal might not mean much in the long run. Congress tends to ignore the president’s budget and propose its own funding levels. Even in bad budget times, science has traditionally had strong support from Congress.

However, the budget proposal is important because it shows the president’s priorities—and regulation of or support for energy and the environment are clearly not among them.

EPA’s science and technology support would drop about 40%, to $424 million, in 2019. The plan would eliminate EPA’s climate change research, programs to reduce greenhouse gas emissions, and efforts to reduce radon exposure. It would zero out the agency’s Science to Achieve Results research grants and graduate fellowships.

EPA’s spending on the review and registration of pesticides would decrease to $93.3 million, a loss of around 20% compared with 2017 levels. Some of that decrease would be made up with about $48 million in industry-paid user fees. But there’s a catch. Congress must first renew EPA’s authority to collect the fees, which expires on March 23.

The agency would receive $58.6 million plus additional funds paid for by industry fees to implement the revised Toxic Substances Control Act. EPA received the same amount in 2017, without the industry fees.

The Department of Energy also faces proposed cuts to its energy and environment programs. Fossil energy R&D would receive almost $500 million, nearly $100 million less than in 2017. Energy efficiency and renewable energy science would get less than half of 2018 levels. The proposal eliminates several DOE energy-focused programs by arguing they should be funded by private entities. One is the Advanced Research Projects Agency-Energy, a $300 million program that supports breakthrough technologies that are unlikely to obtain private funding.

Overall, funding for DOE’s science activities would reach $14 billion, with almost half going to nuclear-weapons-related work. Basic science would receive about $5.3 billion, similar to 2018 levels.

Another hard-hit agency is NIST, which faces an overall cut of 37% from 2017 to $628 million. That includes a 14% cut to its laboratory programs to $516 million, including support for many chemists. The Hollings Manufacturing Extension Partnership, which supports small and medium businesses, would also be eliminated in the proposal.

USDA would see its R&D budget fall to $2.1 billion, a decrease of 18.5% compared with 2017. USDA’s primary competitive research grant program, the Agriculture & Food Research Initiative, would remain flat at $375 million.

NSF spending would remain at 2017’s level of $7.5 billion. But Research & Related Activities support, including almost all grant funding, would get a 2% increase.

In the initial proposal, NIH had faced proposed cuts of more than 20%, but it ended up with an increase of around 4% from 2017 to $35.5 billion. Much of the extra funding would go to fight the opioid epidemic. Some individual institutes were still slated for cuts.

For the second year, the Trump administration proposed eliminating the Chemical Safety Board, which investigates chemical accidents. Its funding would be $9 million for 2019 to finance the closing of CSB’s operations.

Comments
Suleimenov E.N. (February 19, 2018 3:55 AM)
Trump acts logically! What's the point in studying climate change? It is necessary to find such technical solutions that will prevent uncontrolled migration of the population of the earth, give new life to infertile lands, enable them to save water and eliminate energy monsters.