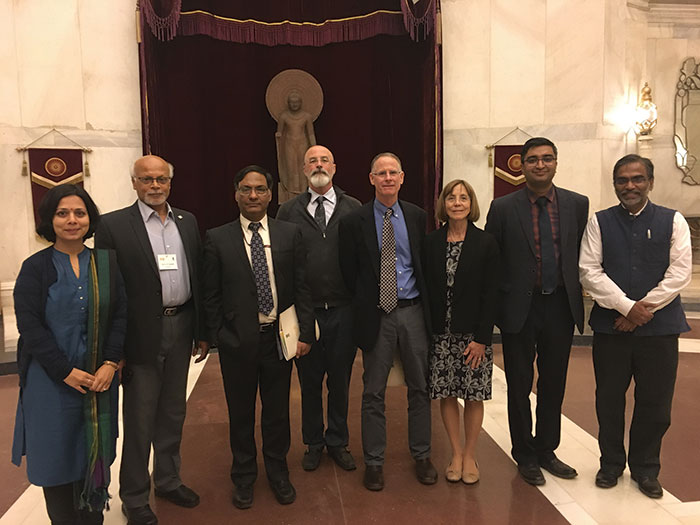 On Feb. 5, a delegation of ACS journal editors and editorial staff attended a Nobel Prize Series 2018 event hosted by Indian President Ram Nath Kovind at his official residence. The event brought Nobel laureates, government officials, policy-makers, and representatives from academia and industry together to develop an action plan and policy for building better universities and research institutions in India.

“Keeping pace with this investment in science, we have also invested in people through our institutions of higher education,” Kovind said in his remarks. “In almost a decade, we have created several central universities, the Indian Institutes of Technology, the All India Institute of Medical Science, and the Indian Institutes of Science Education & Research. For these investments to bear fruit, these institutions and also our schools must be as good as the best in the world. Together we can make innovation not just a passion for our scientific elite, but the lifeline of our schooling system.”

Chemistry Nobel laureate Lindahl says, “It is an exciting time for India to heavily invest in science and bring excellent scientists to the country, attracting them by providing a conducive ecosystem.”

India envisions creating “institutes of eminence” and hiring top-notch researchers, with a special focus on bringing researchers back home.

During a panel discussion at the event, Sharma, secretary of India’s Department of Science & Technology and Department of Biotechnology and associate editor of ACS Applied Materials & Interfaces, said that quality leadership should be selected by quality committees, and rules and regulations must be flexible but certainly include accountability. “There has been less investment by industry and philanthropic organizations; we need to build institutes as public-private partnerships,” he said.

On Feb. 9, India announced the creation of Ph.D. fellowships in science and technology. Nearly 1,000 fellowships will be given annually to students in India who go abroad to do research.

Schanze, editor-in-chief of ACS Applied Materials & Interfaces, says there are many reasons to be optimistic about the future for science in India, given the clear commitment from the political leadership. He adds that ACS Publications is well respected by the Indian science community, and benefits are already apparent from the increased engagement within the community.

“I think the time and effort put into this meeting speaks worlds about how seriously India takes its role in the global research community,” says Rotello, editor in chief of Bioconjugate Chemistry.