A bacterial enzyme, transformed via directed evolution, offers a way to tag cells that come into close contact with one another

New approach reveals cell-cell interplay when sortase A (green) expressed on a cell of interest transfers a biotin-labeled peptide (red, left inset) onto N-terminal glycines on the surface of interacting cells (right inset).

Tracking interactions between different types of cells in the body can offer clues to an organism’s development, reveal cellular functions, or track tissues’ responses to treatments. However, existing methods involve toxic reagents or require engineering proteins on each of the interacting cells, which means scientists have to know beforehand which cells are involved. Now, researchers have devised a scheme to label cell-cell encounters in their natural environment without prior knowledge of which type of cells interact (J. Am. Chem. Soc. 2019, DOI: 10.1021/jacs.8b10286).

Peng. R. Chen of Peking University was studying a bacterial enzyme called sortase A when he realized it had the potential to be a useful tool for monitoring such interactions. In the natural world, sortase A fortifies bacteria by cross-linking proteins in their cell walls. The enzyme does this in a specific manner: it finds a signature amino-acid sequence in one protein and connects it to a signature sequence of three to five glycines in another protein. In the lab, researchers have taken advantage of the enzyme’s ability to recognize these specific sites in order to modify proteins in a variety of ways, both in vitro and in living cells.

In a study published last January, a team led by Rockefeller University immunologist Gabriel D. Victora developed a sortase-based approach to track immune cell interactions. First, they engineered mice that express sortase A on the surface of T cells and the multi-glycine sequence in the membrane proteins of B cells or dendritic cells. Then they injected the mice with a peptide tagged with biotin, which gets captured by sortase A. When a T cell comes close enough to a B cell or dendritic cell for the enzyme and multi-glycine site to interact, the biotin tag gets transferred to the interacting cell (Nature 2018, DOI: 10.1038/nature25442). By tracking such cell-cell interactions, this system is able to reveal the initiation of immune responses in vivo.

The sortase A-producing cells can only reveal interactions with cells that were pre-engineered to produce a three- to five-glycine tag on the cell surface. Chen wanted a tool to reveal as-yet-unknown interactions between cells. His solution: make sortase A more promiscuous.

Using a Nobel Prize-winning technique that applies natural selection to reshape enzymes, Chen’s team evolved a sortase A variant that can bind to proteins containing just a single glycine at the N-terminus rather than needing a sequence of three to five glycines. N-terminal glycine is found in membrane proteins of virtually all cells. With this broader scope, Chen says, “you can label any cell of interest.”

So far his team has used the system, called EXCELL (enzyme-mediated proximity cell labeling), to track interactions among kidney, cancer, and B cell lines. Next, they will express the enzyme in immune cells or tumor cells in mice to show the system works in vivo. In addition, Chen says, physicians at Peking University First Hospital plan to use the method with cancer patients undergoing treatment with T cells engineered to fight their tumor. By expressing sortase A in the engineered T cells, the physicians could label tumor cells from patient blood samples that come into close proximity to the T cells. Sequencing RNA from those tumor cells could reveal gene signatures that correlate with resistance to immune therapies, Chen says.

The field is enjoying a number of new techniques for labeling proteins within living cells, and this evolved sortase is “a great new addition to the toolbox,” notes Peter V. Robinson, a chemist who creates tools for detecting proteins in living cells and who cofounded Enable Biosciences. He speculates, though, that you could get a biased signal if some cells have especially high or low numbers of glycines in their surface proteins. 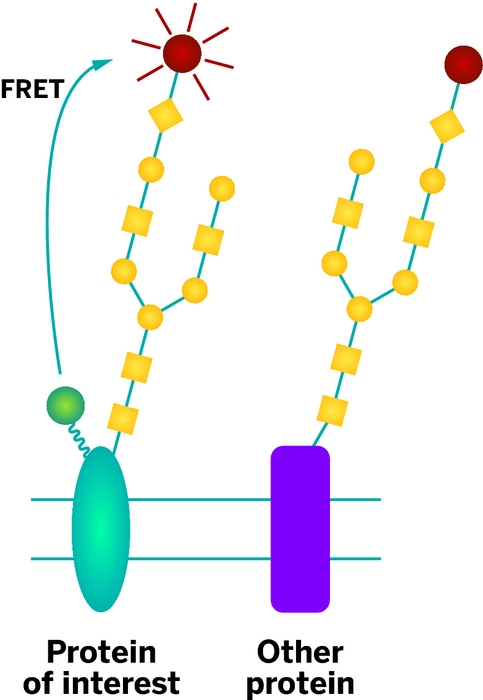 Biological Chemistry
Strategy Selectively Monitors Carbohydrates On Specific Proteins
Share X
To send an e-mail to multiple recipients, separate e-mail addresses with a comma, semicolon, or both.
Title: New labeling method can reveal cell-cell interactions
Author: Esther Landhuis
Chemical & Engineering News will not share your email address with any other person or company.