Nanoparticles team up with light to kill microbes﻿

As bacteria and fungi develop resistance to antimicrobial drugs, some researchers have looked for alternative ways to kill the pathogens. For example, when hit with certain wavelengths of light, photosensitizing molecules, or photosensitizers, convert neighboring oxygen molecules into reactive oxygen species (ROS) that can kill microorganisms. Currently, there is no known mechanism for pathogenic bacteria and fungi to develop resistance toward ROS.

However, many photosensitizers are not water soluble, tending to aggregate in water, which reduces ROS generation. Even soluble ones present practical issues: When they are diluted it can take a long time and a lot of light to generate enough ROS to destroy microbes.

At the American Chemical Society national meeting in Boston, researchers reported nanoparticle formulations that amplify the ROS generation of both soluble and insoluble photosensitizers. These formulations were 10,000 to 1 million times more efficient than using naked photosensitizers. Niranga Wijesiri in the lab of Peng Zhang at the University of Cincinnati presented some of the work during a poster session on Sunday in the Division of Biological Chemistry.

In the design reported at the meeting, Zhang’s team used nanoparticles made from half-hydrophilic, half-hydrophobic polymers and a gold core to kill multi-drug resistant Staphylococcus aureus under white light with water-insoluble photosensitizers (ACS Omega 2017, DOI: 10.1021/acsomega.7b00738). In related work, the team designed another nanoparticle that consisted of a mesoporous silica matrix and a silver core. These particles used water-soluble photosensitizers and blue light to kill the fungi that cause athlete foot infections (Photodiagnosis. Photodyn. Ther. 2018, DOI: 10.1016/j.pdpdt.2018.06.019) and acne bacteria. The silver-based nanoparticles didn’t damage human tissue samples in lab tests.

Zhang said his team hopes their nanoparticle formulations can reduce the usage of antibiotics and slow the spread of drug resistance. The ultimate product, Zhang said, may be a spray or a gel that works under a hand-held light.

Long Chiang, a chemist at University of Massachusetts, Lowell, who studies antimicrobial photosensitizers, told C&EN that the researchers’ work represents an interesting proof of concept. Before the formulations can move to clinical trials, the researchers will need to modify the nanoparticles to prevent potential side-effects and attacks by the immune system, Chiang said.

Zhang’s team has a patent on the technology, and is planning pre-clinical tests in animals. 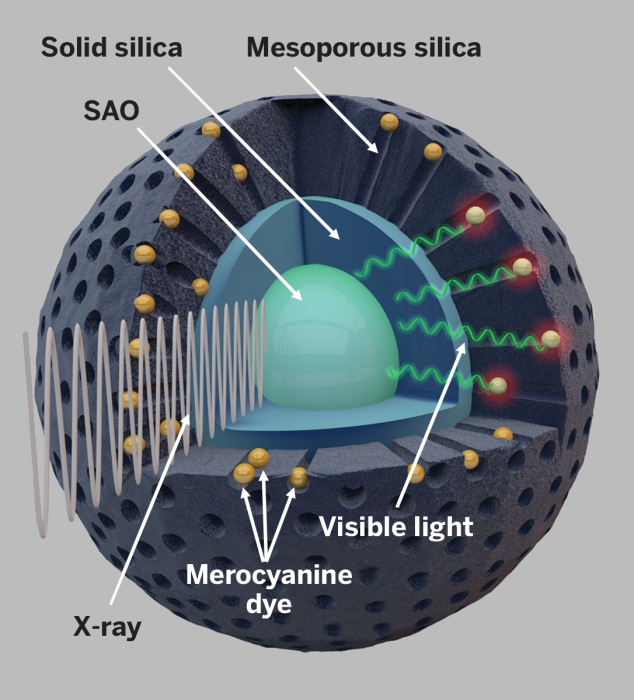 Pharmaceuticals
Nanoparticle Takes Photodynamic Therapy To Deep Tumors
Share X
To send an e-mail to multiple recipients, separate e-mail addresses with a comma, semicolon, or both.
Title: Nanoparticles team up with light to kill microbes﻿
Author: Cici Zhang
Chemical & Engineering News will not share your email address with any other person or company.