August is a banner month for drug approvals

US FDA approves 9 new pharmaceuticals, and all are small molecules

While others vacationed last month, scientists and regulators at the US Food and Drug Administration were busy. The agency approved 9 new drugs in August—more than a third of the drugs it has approved so far this year.

All of the 9 new drugs the FDA approved in August are small molecules. 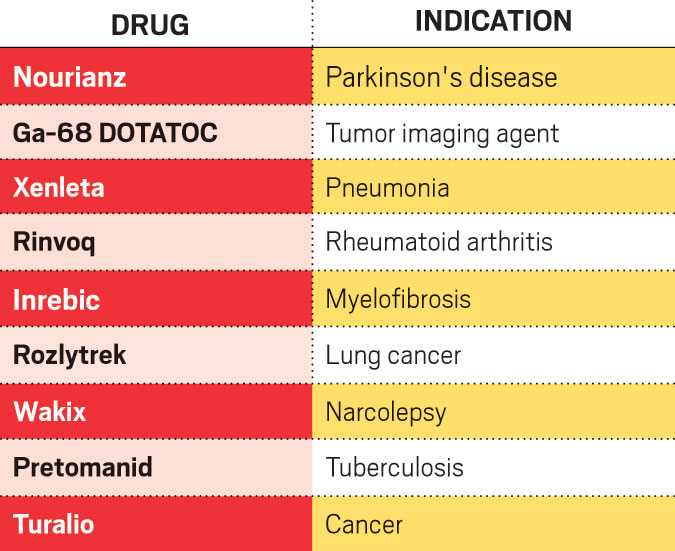 And hearteningly for chemists who work in drug discovery, all 9 are small molecules.

Through Aug. 29, the FDA approved 26 new drugs, compared with 34 in the same period in 2018 and 31 in the first eight months of 2017. The agency approved a record 59 drugs in 2018. Small molecules are dominating this year’s new drugs. Of the 26 approved, 20—over 75%—are small molecules. Four are antibodies, one is a peptide, and one is a Botox-like botulinum toxin. Not included in the tally is the Novartis spinal muscular atrophy gene therapy Zolgensma, which the FDA doesn’t consider a drug. Sixty-four percent of the drugs approved in 2018 were small molecules.

One downside for chemists is that, for the most part, this year’s small molecules aren’t forecast to be big moneymakers.

The insights firm Clarivate Analytics predicts that 7 of the drugs to be approved in 2019 will be blockbusters, with more than $1 billion in annual sales within a few years. Of those, only 2 are small molecules: AbbVie’s Rinvoq, which was approved in August to treat rheumatoid arthritis, and AstraZeneca kidney disease treatment roxadustat.

Garth Ringheim, Clarivate’s therapeutic area director, sees two reasons for the new biologics’ outsize sales potential. One is that they are much more expensive to make than small molecules. The other is that they tend to treat difficult diseases that have eluded small molecules.

Despite the dominance of small molecules this year, Garth sees their share of approvals dipping over time. But they will continue to be important for modifying biological activity within cells. And in some cases, such as Celgene’s psoriasis treatment Otezla, they are gaining share in traditional biologics markets.

Share X
To send an e-mail to multiple recipients, separate e-mail addresses with a comma, semicolon, or both.
Title: August is a banner month for drug approvals
Author: Michael McCoy
Chemical & Engineering News will not share your email address with any other person or company.