With US tariffs on Mexican goods being threatened at the time, on top of those already imposed on products from China, the mood around trade was grim. Executives said they had come to accept the new reality of tariff-laden foreign trade and were taking steps to mitigate its impact. On the matter of plastic waste, attendees were more optimistic, arguing that the chemical industry is getting a grip on the problem of plastics in the oceans.

Related: Caution ahead in petrochemicals

Executives are confronting these issues against the backdrop of a softening global economy. At a press briefing at the conference, held in Colorado Springs, ACC chief economist Kevin Swift told reporters that he expects the US economy to grow by 2.5% this year, down from 2.9% last year. US chemical industry growth will also be down, to 2.5% from 3.8% last year.

Attendees took some comfort in the knowledge that the US is doing better than much of the rest of the world. “There are a lot of headwinds in the global macroeconomy,” Swift said. “Growth is anemic at best in Europe. It’s mixed in Asia.”

Exports have been a bright spot for the US industry, Swift said. The US’s chemical trade surplus with the rest of the world is on track to reach $37 billion this year, thanks to an expected 5.9% rise in exports to $149 billion.

But that surplus would be even greater, Swift said, were it not for slowing economies around the world and the trade war with China that President Donald J. Trump instigated. Indeed, in ticking off the ACC’s current priorities, Calvin Dooley, the association’s CEO, told reporters that “what’s first and foremost is trade.”

For Dooley, the irony is that the ACC shares Trump’s gripes about China—disrespect for intellectual property, strong-arming of business partners, and other market-distorting policies. Dooley’s issue is with the way Trump confronts China. “When you do it in a unilateral fashion, no one should be surprised that the retaliation is targeted at the most competitive sectors of the economy,” he said.

Opening a front against Mexico in the trade war would only compound the problem, Swift said, noting that nearly half—almost $18 billion—of the chemical trade surplus this year will be with Mexico. Dooley pointed to a possible silver lining, suggesting that the Mexico tariffs would have prompted Congress to take action that limits the president’s tariff-raising power.

Related: Year begins with no end to US-China trade war in sight

While the ACC lobbies in Washington to dial back tariffs, chemical companies are scrambling back at their offices to adapt their supply chains to the new trade-constrained world.

The China tariffs are particularly frustrating for Jacob Sturgeon, general manager of the US arm of China’s Wanhua Chemical. Wanhua is getting ready to build a $1.4 billion facility in Louisiana to make methylene diphenyl diisocyanate (MDI), a polyurethane raw material that is in short supply in the US. Wanhua has been importing MDI from its facilities in China to bridge the shortfall in local production and seed a market for the planned Louisiana facility.

Sturgeon traveled to Washington, DC, last summer to testify about the impact of tariffs on Wanhua’s plans, but to no avail. MDI was on a list of products hit with a 10% tariff last summer, and that figure recently went up to 25% after Trump lost patience with trade negotiations. The irony, Sturgeon told C&EN at the meeting, is that Wanhua is being punished for trying to bring investment and jobs to the US and close the trade gap with China.

“We’re doing exactly what the administration wants to happen,” he said, “and the tariffs are making it more difficult.” Wanhua is moving forward with its construction plans, Sturgeon added, though not without a lot of frustration.

John Pittman, president of the water treatment chemical company SNF Holding, likewise headed to Washington last summer to testify against tariffs on a quaternized form of dimethylaminoethyl acrylate that SNF imports from its facilities in China.

Known as Adame-quat, the monomer is an intermediate for polyacrylamide flocculants. It has been in short supply in the US since 2016, when BASF closed a plant in Tennessee. Pittman argued that paying the tariff would impede his firm’s US investment in water treatment chemicals, which are required by municipalities across the country.

After learning that his plea was ignored, Pittman and his SNF colleagues got down to business. Although Adame-quat had a tariff, Adame itself did not. So SNF embarked on an expansion of quaternization capacity at its plant in Riceboro, Georgia. That project will start up next month, Pittman told C&EN, allowing the firm to cut imports of Adame-quat and import Adame instead.

At the same time, financially constrained by the tariff, SNF took a 6-month pause on a bigger project to boost its capacity in Riceboro to make Adame. That project will now begin next year and be completed in 2021, Pittman said.

Privately owned and focused on water treatment chemicals, SNF can react nimbly to tariffs and other business shifts, Pittman said. But he lamented the overall effect of the current trade policy on the chemical industry’s ability to make long-term plans. “I’m less concerned about the tariff than about the uncertainty of the tariff,” he said. “The uncertainty makes us cautious. I think it makes other companies cautious as well.”

Kraton is another chemical maker that has used its global footprint to rejigger supply chains in response to the tariffs.

At its facility in Belpre, Ohio, Kraton produces styrene-isoprene-styrene (SIS) polymers, commonly used in pressure-sensitive adhesives. Because isoprene is produced in limited quantities in the US, the company imports some from China to manufacture the polymer.

Kraton executives were dismayed to learn last summer that isoprene was on a list of chemicals targeted for tariffs, but SIS polymers were not. Kraton’s CEO, Kevin Fogarty, wrote a letter to the Office of the US Trade Representative suggesting that if the government puts a tariff on the monomer it should also put one on the polymer. “We are in effect giving the importer of the polymer an advantage,” he told C&EN.

Despite the trade wars, the American Chemistry Council sees a growing chemical trade surplus for the US. 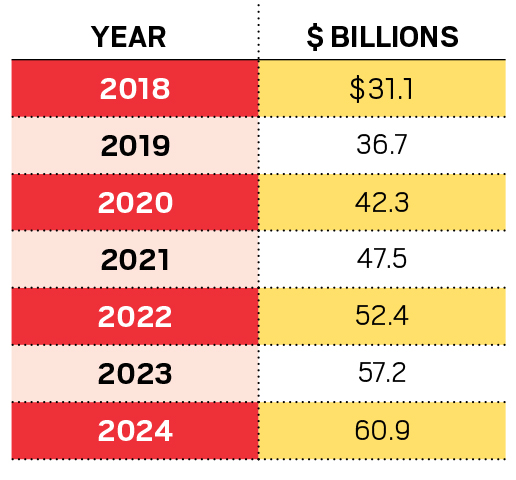 As happened for Wanhua and SNF, Kraton’s complaint went unheeded, so the company went into action. Back in 2013, it had teamed up with Formosa Plastics to build a hydrogenated styrenic block copolymer (HSBC) facility at a Formosa petrochemical complex in Taiwan. Formosa, it turned out, is also an isoprene producer, and Kraton was able to shift purchases from China to its partner in Taiwan.

Kraton’s Taiwanese project paid a second tariff-avoidance dividend after HSBC that Kraton shipped to China from Ohio was hit by retaliatory Chinese tariffs. Its Chinese customers accelerated their qualification of polymer made in the new Taiwanese facility, allowing Kraton to shift its supply chain and avoid paying a tariff on US-made polymer.

“The net effect of all the tariffs is manageable,” Fogarty said. Larger than the supply-chain impact, he added, is the cautiousness that Kraton is encountering among its Chinese customers, who are reducing purchases of HSBCs and other Kraton polymers. Fogarty also had his eye on the possibility of tariffs on Mexican goods, though Trump pulled back on them.

Whereas discussions of tariffs mainly involved sober tales of supply-chain revamps and higher prices, most executives at the ACC meeting professed optimism that the plastic waste problem is one the chemical industry can solve.

That was the message of Jim Fitterling, CEO of Dow, when he updated reporters about the Alliance to End Plastic Waste, a coalition of plastic producers and consumer goods companies that launched in January. Conceived at the 2018 ACC meeting, the alliance has raised $1.1 billion so far for projects intended to cut plastic waste and increase recycling, Fitterling noted.

Related: Warnings grow about impact of tariffs on chemicals from China

As an example, he pointed to Renew Ganga, a project targeting plastic dumped into India’s Ganges River, one of 10 rivers in Asia and Africa identified as the source of 90% of river-borne ocean plastics. One goal of the program, managed by the nonprofit Renew Oceans, is to create local collection and sorting businesses that will both stimulate the economy and cut plastic waste.

At the meeting, the consulting firm Accenture released a survey of more than 6,000 people from 11 countries about their views on recycling. Among its conclusions: more than half of consumers said they would pay more for sustainable products designed to be reused or recycled.

The survey results weren’t all good. For example, consumers ranked chemical companies the lowest among nine industries for the reliability of their communication about the environmental impact of their products. “Companies need to tell their stories better,” said Jessica Long, a managing director at Accenture Strategy. “And they need to do what they say.”

Chris Cardinal, a director at the consulting firm PwC, noted that companies embraced plastics recycling about a decade ago when oil prices were high. But when oil prices collapsed, he observed, the economics suffered and enthusiasm wore off, particularly in the US, where economics often trump social value.

This time, Cardinal predicted, will be different. The millennial consumers coming of age are willing to pay extra for plastic bags and to buy biodegradable materials, even if they cost a bit more. “I think the populace is ready for a change,” he said.

Share X
To send an e-mail to multiple recipients, separate e-mail addresses with a comma, semicolon, or both.
Title: Trade and plastics woes shadow chemical conference
Author: Michael McCoy
Chemical & Engineering News will not share your email address with any other person or company.