The US chemical industry posted excellent results, but they might not last 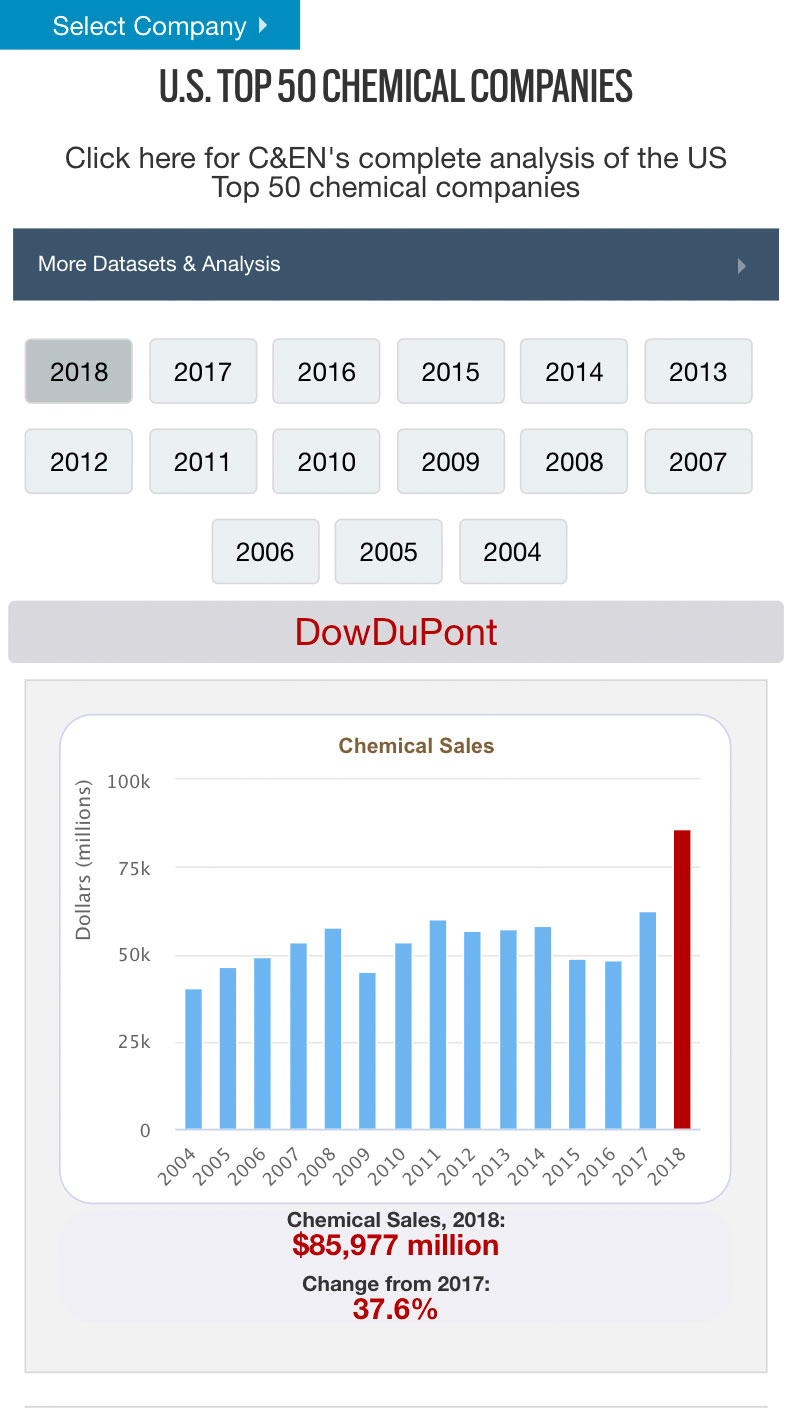 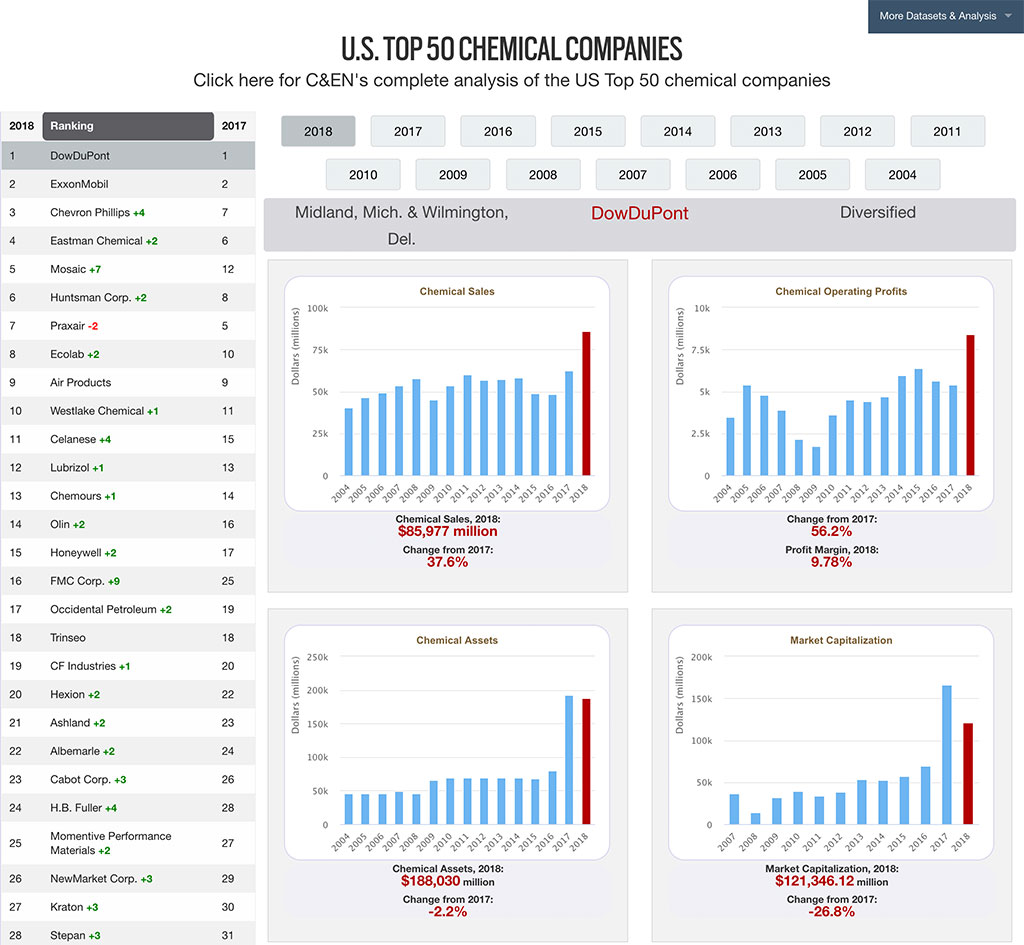 Last year was another terrific one for the US chemical industry. According to C&EN’s latest ranking of the top 50 US chemical producers, sales and profits both surged.

Among the many factors that influenced the sharp rise in sales was an increase in production at US factories. According to the American Chemistry Council, a trade association, US production volumes rose a relatively strong 3.1% last year.

Energy prices answer for some of it, too. Most chemicals are made from oil and natural gas directly or require energy in the form of fuel or electricity. Higher oil prices normally lead to higher prices for chemicals.

Thanks to strong growth, newcomers Taiyo Nippon Sanso and Yara make the cut. 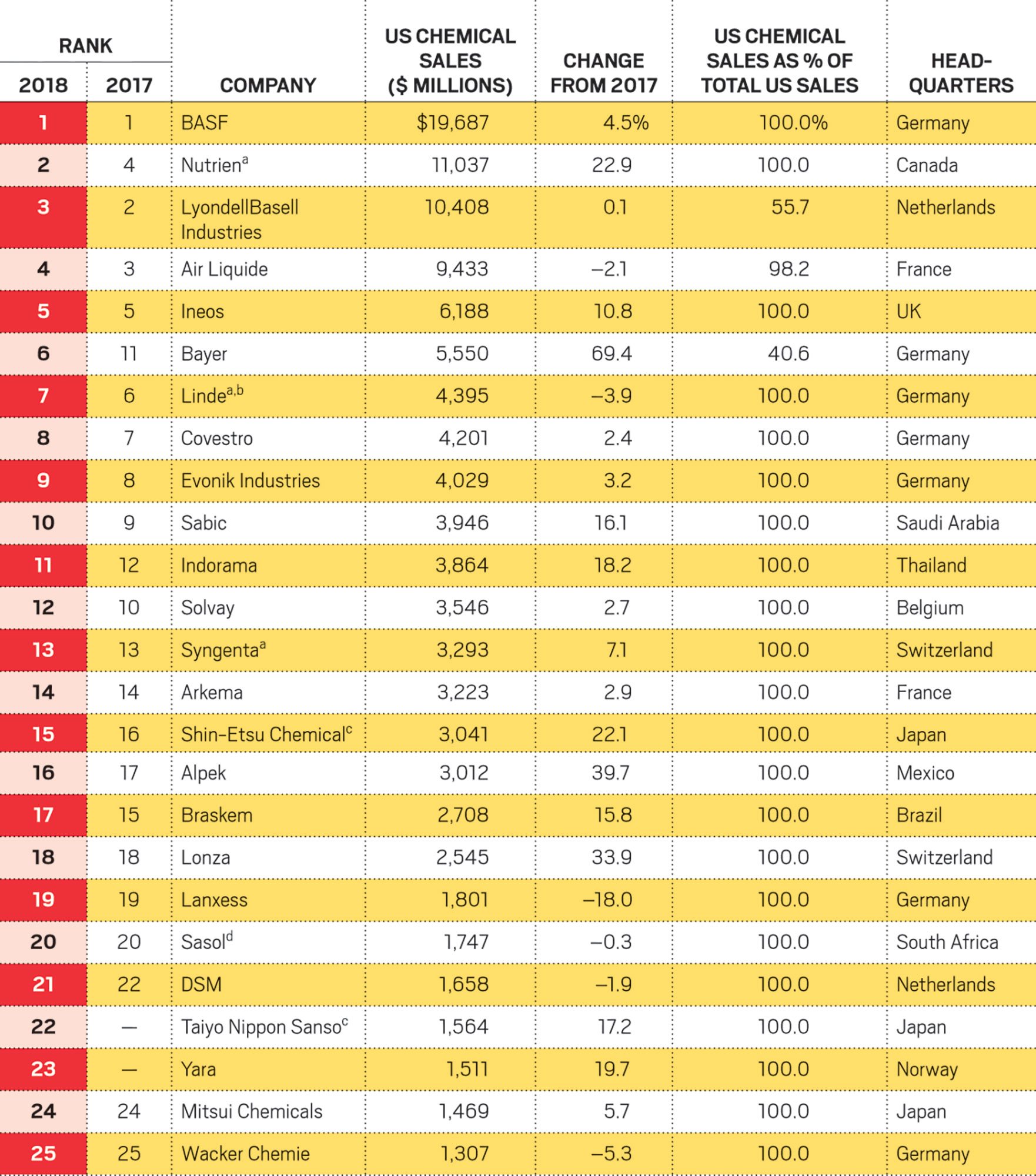 Note: Figures from companies that report in native currencies were converted to US dollars at average annual exchange rates from the Federal Reserve. a Chemical sales include a significant amount of nonchemical products. b Linde figures are for 9 months. c Fiscal year ended March 31, 2018. d Fiscal year ended June 30, 2018.

Oil prices actually declined during the year, from $60 per barrel in January to $45 in December. However, those two points don’t tell the whole story. Oil prices increased steadily until October, peaking at $75 per barrel. They came crashing down on worries over increased trade barriers and an economic slowdown.

Indeed, those same concerns crushed chemical stock prices. The combined market capitalization of the 34 chemical companies in the ranking with publicly traded shares dropped 20.2%, to $322.1 billion.

The American Chemistry Council expects the industry will grow by another healthy chunk, 3.6%, in 2019. But some companies expect a slow start. Eastman Chemical is targeting job cuts because it expects sluggish business. Both Huntsman and Dow have warned about earnings declines in the first quarter of this year.

DowDuPont tops this year’s ranking because of its $86.0 billion in sales in 2018, the first and only year the company reported full-year results. This will be the second and last year it appears on the ranking.

Dow and DuPont merged in 2017 with the intention of combining their agricultural businesses, exchanging other units, and then splitting apart into three firms. All of them will rest near the top of future C&EN rankings.

Dow separated on April 1. It holds all the heavy petrochemical and polymer businesses. It is the biggest of the three firms and would have had $48.8 billion in sales had it been an independent firm in 2018, enough by itself to top the ranking.

The new DuPont, which contains all the specialties businesses, will separate on June 1. It would have had $22.6 billion in 2018 sales, enough for the third-highest spot in C&EN’s ranking.

Corteva Agriscience will inherit all the agrochemical and seed operations. It is also separating on June 1. Its businesses racked up $6.3 billion in chemical sales in 2018, enough for the 14th-highest position in the ranking.

When companies disappear from, join, or move up and down the ranking, it generally indicates they recently conducted an acquisition or divestiture. Brisk dealmaking certainly made its mark on the ranking this year.

DuPont, of course, vanished temporarily this year into DowDuPont.

On the plus side of C&EN’s ledger, the highest-ranking addition is laboratory and fine chemical maker Avantor, at number 29. It acquired VWR in late 2017 and filed a prospectus with the US Securities and Exchange Commission for a public offering earlier this year.

Genesis Energy is an energy distribution master limited partnership (MLP). It appears on the list at number 39 because it bought, of all things, Tronox’s soda ash business. The company aims to diversify, and soda ash gets the same tax breaks as energy businesses do under MLP rules.

The other new additions are 3M, which is breaking out results for its fluoropolymer business for the first time in a long time, and Goodyear Tire & Rubber, because of its strong results in synthetic rubber.

Ongoing mergers and acquisitions will take firms out of future rankings. Last month, Merck KGaA inked an agreement to buy Versum Materials, number 37 in the ranking, in a transaction valued at $6.5 billion. Momentive is being acquired by a consortium of South Korean firms for $3.1 billion.

Likewise, the industrial gas firm Praxair merged with the German company Linde and moved its headquarters to Europe. Praxair was an independent firm for three quarters of 2018, so it lingers in this year’s ranking, albeit at number 7, down from number 5 last year.

Conversely, Mosaic jumped from number 12 to number 5 with its purchase of Brazil’s Vale Fertilizantes early last year. FMC acquired a large chunk of DuPont’s agrochemical unit to satisfy antitrust objections to the Dow-DuPont merger. As a result, FMC climbed to number 16 from number 25.

Overall, dealmaking got off to a slow start in 2019. The consulting firm PwC recorded 168 chemical deals in the first quarter of the year, down 24% from the same period the year before.

However, Craig Kocak, the firm’s US chemical deals leader, expects to see a robust number of transactions in 2019, particularly in specialty chemicals. “Given the stability of the broader economy during the first quarter of 2019, the record levels of cash available at both private equity and corporates, and the continued focus on portfolio coherence, the outlook for M&A activity continues to be upbeat,” he says.

In a rough 2018 on Wall Street, most companies saw their stocks tumble.

Note: Based on share prices on Dec. 31, 2018, and Dec. 29, 2017. These 34 companies are the publicly traded firms on the top 50 list that generate more than half their revenues through chemical manufacturing.

Mounting worries over a trade war pushed down stocks during the second half of the year, hitting the trade-sensitive chemical industry hard. The 20.2% drop in the market capitalization of the 34 publicly traded firms was broad, with 29 of them experiencing declines.

The biggest market capitalization drop, 67%, was at the coal-tar chemical maker Koppers. Kraton, which makes polymers and pine chemicals, and Kronos Worldwide, a titanium dioxide producer, both experienced drops in excess of 50%.

The three largest gainers were Mosaic, Ingevity, and Cabot Microelectronics, all of which have been making acquisitions.

Once again, BASF leads C&EN’s ranking of the US chemical sales of 25 foreign-owned companies. It posted $19.7 billion in 2018 chemical revenues in the region.

It is followed by a new name—Nutrien, the product of a merger between the Canadian fertilizer makers Agrium and Potash Corporation of Saskatchewan.

The other newcomers are the Norwegian fertilizer maker Yara and the Japanese industrial gas supplier Taiyo Nippon Sanso. The Japanese firm, a subsidiary of Mitsubishi Chemical Holdings, purchased US assets that Air Liquide and Airgas needed to divest to complete Air Liquide’s purchase of Airgas.

One company dropping off is AkzoNobel. The paint maker sold its specialty chemical business, Nouryon, to the private equity firm Carlyle Group and the Singapore sovereign wealth fund GIC. AkzoNobel is out of chemicals, and Nouryon isn’t reporting regional results now that it is privately held.

C&EN’s annual ranking of the top 50 chemical companies includes only those firms that are willing to disclose their annual sales. It captures most relevant companies, but some that would undoubtedly make the cut—about $500 million in annual sales—are excluded because their precise sales figures are unknown.

One example is companies owned by privately held Koch Industries. Two of Koch’s holdings, the nylon maker Invista and the basic chemical maker and refiner Flint Hills Resources, would certainly make the ranking, and fairly high up at that.

Other longtime privately held firms that might have made the ranking are Cargill, J.M. Huber, and Milliken.

Other chemical businesses go untallied because they are buried in large companies. Procter & Gamble’s oleochemical business is a case in point. Archer Daniels Midland might make enough amino acids and other biobased chemicals to make C&EN’s cut. Chevron’s Oronite unit, which makes lubricant additives, could be large enough. PPG Industries’ business in silica and other specialty materials would likely take a place in the ranking as well.