But Shin-Etsu bucks the trend by posting record results

by Jean-François Tremblay, special to C&EN

Most major Japanese chemical firms posted lower net earnings for the 2018 fiscal year, which ended March 31. But the drop comes after several years of steadily rising profits. And it was not universal. Reporting higher results for the eighth year in a row, Shin-Etsu Chemical posted its highest net profit ever. 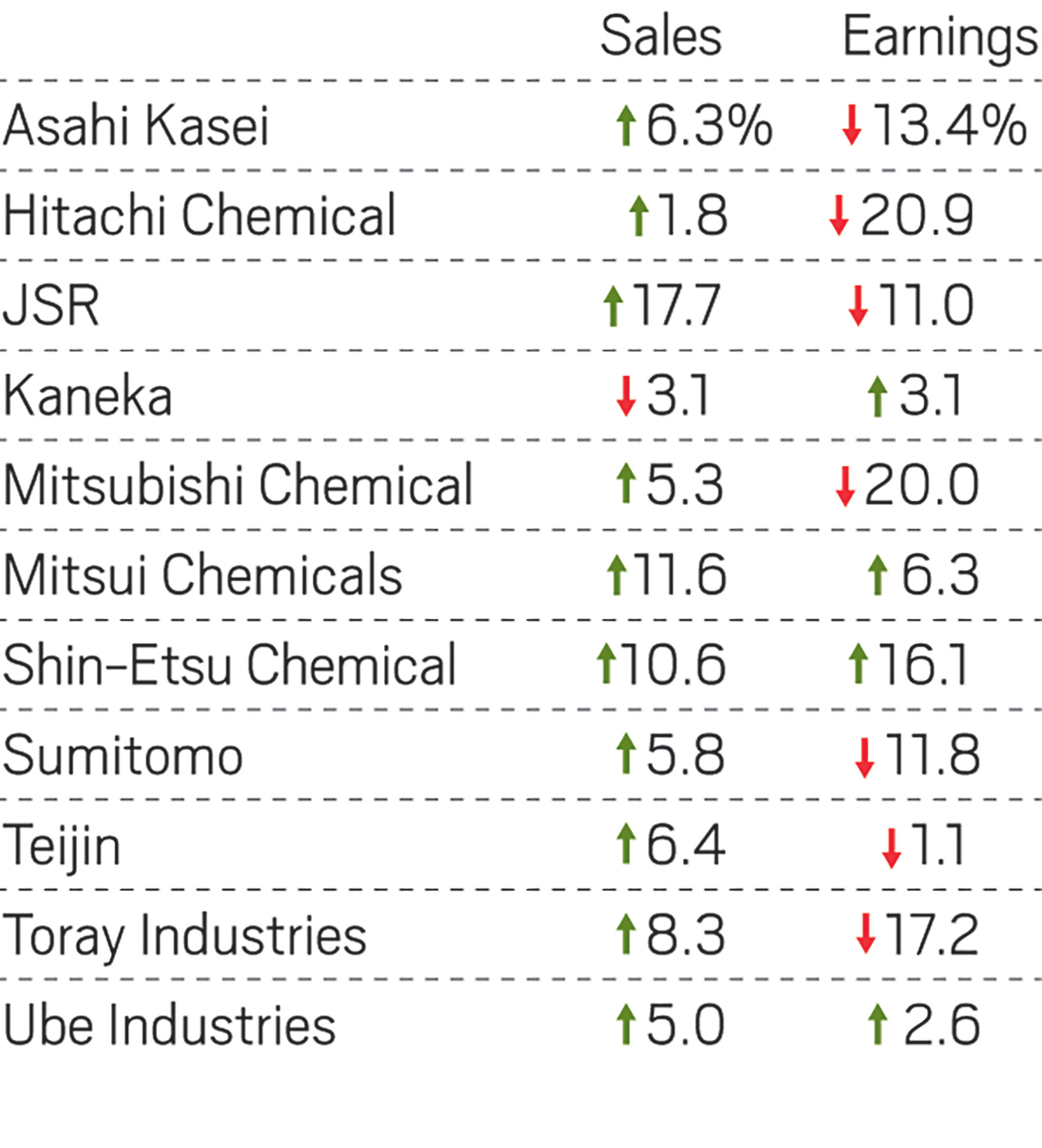 At Asahi Kasei, net profit margin—net earnings divided by sales—was still a healthy 7.0% despite a 13.4% dive in earnings. At JSR, a producer of synthetic rubber, electronic materials, and biomaterials, the net profit margin was 6.3% even after its profit shrank 11.0%.

Most companies said buoyant economic conditions around the world generally favored them. Asahi Kasei, for instance, experienced rising sales across the board for its core businesses of plastics, residential homes, electronic materials, pharmaceuticals, and car materials and parts. The lower net profit was mostly the result of a lower capital gain from asset sales, the firm reported.

In an optimistic mood, several firms made noticeable acquisitions in the past fiscal year. Mitsubishi Chemical’s industrial gas subsidiary, Taiyo Nippon Sanso, recently paid over $5.5 billion for the European business of Praxair after the US firm merged with Germany’s Linde. Last July, Asahi Kasei paid $700 million for Sage Automotive Interiors, a US car industry supplier. And in March, Teijin bought Renegade Materials, a US supplier of polymer composites to the aerospace industry.

But looking ahead, the firms mostly see clouds on the horizon. “A sense of uncertainty about the future has been increasing since the second half of fiscal 2018, as the supply-and-demand balance for some products loosened due to growing concerns over more serious US-China trade frictions and other factors,” said Mitsubishi Chemical, Japan’s largest chemical company. Citing China, JSR said it is already experiencing lower demand for synthetic rubber.

Shin-Etsu Chemical, the world’s largest producer of silicon wafers and polyvinyl chloride (PVC), seems to feel no such caution. Profit margins for wafers were high during the year, owing to tight supply at a time of low customer inventories. Margins were also strong for PVC on the back of healthy demand in the US and Europe.

Yoshihiro Azuma, a Tokyo-based chemical industry analyst at the investment bank Jefferies, sees little reason to worry about Shin-Etsu’s near-term future, even if a trade war breaks out (see page 3). In a note to clients, he predicted that demand for silicon wafers and PVC will remain solid for the next 3–4 years while little investment in capacity takes place.

One of the few firms investing in PVC, in fact, is Shin-Etsu. It is building a large new facility in Louisiana.

Share X
To send an e-mail to multiple recipients, separate e-mail addresses with a comma, semicolon, or both.
Title: Profits dip for Japanese chemical firms
Author: Jean-François Tremblay, special to C&EN
Chemical & Engineering News will not share your email address with any other person or company.