A strong global economy contributes to a robust outlook for instrument sales, particularly for drug research

Instrumentation executives are by nature an optimistic lot. This year, leaders attending the Pittcon scientific instrumentation conference in sunny Orlando had more reasons than usual to be optimisti

As Pittcon got under way at the end of February, the economy, both in the U.S. and globally, was gaining momentum. Increases in academic and business investment, especially in the life sciences, had already translated into strong instrument sales in 2017 for instrument makers such as Thermo Fisher Scientific, Waters Corp., Bruker, and Shimadzu. Executives from those firms said the trend should continue, and even accelerate, in 2018.

At Pittcon in Chicago last year, instrumentation executives were wary of U.S. tax reform and the changes it could bring to the way they operate. Now that the law is in place, though, executives expect they will benefit from lower tax rates and new rules allowing them to move profits banked offshore back to the U.S. without the higher tax penalties they previously faced.

Many executives also said the changes will make it less costly for them to invest in research and new facilities in the U.S.

Though Pittcon was shorter by a day than last year, more than 11,000 visitors flocked to the Orange County Convention Center to view instruments, components, consumables, and software from more than 700 exhibiting companies.

Dan Shine, senior vice president of Thermo Fisher, said 2017 was a good year, and he is expecting another good one in 2018. The firm, which placed first in C&EN’s recent ranking of instrument firms, expects sales of instruments to industrial and materials science markets to continue strengthening.

Pharma and biotech markets are growing in the high single digits, Shine noted. U.S. academic and government spending on instrumentation could grow as much as 6% if President Donald J. Trump and legislators agree to increase National Institutes of Health budgets, he told C&EN.

Last year’s $7.2 billion acquisition of Patheon, which makes pharmaceutical chemicals and finished-dose drugs, would seem to put Thermo Fisher in competition with some instrument customers. But Shine said his firm can navigate the overlap because Patheon “gives us an opportunity to improve our understanding of what our customers do” and “also gives us a channel for new product development.”

He said Thermo Fisher expects to benefit from U.S. tax reform with a modest drop in its tax rate. The firm took a $204 million charge to earnings at the end of 2017 to account for taxes due on profits held overseas.

Shine added that the tax reform includes benefits for purchasers of capital equipment. The firm, he said, intends to educate instrument buyers about those benefits.

For chromatography and mass spectrometry expert Waters, demand in 2017 was strong across the globe, said Jeff Mazzeo, vice president of marketing. The firm is seeing growth in Southeast Asia as well as in China, where the government has been beefing up instrument purchases to equip food safety testing labs. Chinese contract research organizations are also upping their instrument investments.

The tax reforms in the U.S. “are a game changer for us.”

Waters is benefiting from continued growth in biomedical-related research, Mazzeo noted. “We’re also seeing good success in mass spectrometry imaging techniques used, for instance, to localize metabolites in biological tissue samples.” These techniques are also useful for tracking where drugs end up in tissue, he said. Pharmaceutical-related research makes up 60% of Waters’s $2.3 billion in annual sales.

According to Bryan Brokmeier, Waters’s senior investor relations director, recent changes to U.S. tax law have been “more positive than negative.” The firm took a $550 million charge to earnings in the fourth quarter because of the reforms. The bulk of the charge is for taxes due on cash held overseas, he said.

However, because the firm now has access to that overseas cash, “We can buy back our shares, buy back our debt, and increase investment” in U.S. operations, including R&D, Brokmeier said. Overall, the tax reforms “are a game changer for us,” he added.

Bruker CEO Frank Laukien said the tax reform will give his firm more flexibility to move its money where it’s needed. He also suggested the tax law would allow Bruker to invest more in the U.S., though the firm has made no decisions yet.

Meanwhile, Bruker continues to invest in new technology. Laukien pointed to the February acquisition of IRM2, a developer of high-speed infrared imaging microscopes based on quantum cascade laser technology. Look for products from Bruker Optics that draw on the fast imaging technology for analysis of biological tissue and other materials, he said.

Demand for the firm’s analytical instruments remains strong in the academic market, Kuzdzal added. And demand is growing in the biopharmaceutical market, where the firm has introduced new methods to characterize cell culture media using its triple quadrupole mass spectrometers, he said.

Advion, an Ithaca, N.Y.-based maker of compact mass spectrometers, is also benefiting from strong demand. Advion was acquired in 2015 by the Chinese diagnostics maker Beijing Bohui Innovation Technology. According to Advion CEO David Patteson, Bohui is giving his firm access to the more than 2,000 teaching and research universities in China, even as sales to U.S. research institutions continue strong.

Among the numerous product introductions receiving attention from Pittcon attendees were a portable chromatograph and a novel stir bar.

Axcend, a spin-off from Brigham Young University, introduced a nanoflow liquid chromatograph no bigger than a toaster. The firm was cofounded by Milton Lee, a BYU professor who also developed the Torion T-9 portable gas chromatograph/mass spectrometer. PerkinElmer acquired Torion Technologies in 2015.

Two-year-old Axcend, which has received only angel investor funding to date, expects to begin shipping the Axcend Focus to customers by midyear. CEO Glen Mella said it will cost about $30,000.

Another novel introduction came from Silicon Valley-based Gate Scientific, which developed a temperature-sensing stir bar for mixing liquids. The magnetic neodymium stirrer contains temperature sensors and a microprocessor that wirelessly communicates with the hot-plate base to maintain a set temperature. The stirrer does not contain a battery and harvests energy from the base to power the electronics.

Morten Jensen, an electronics engineer and Gate’s CEO, developed the stir bar system with Kris Scaboo, an analytical chemist and the company’s chief technology officer. The three-year-old firm is self-funded and expects to sell the stir bar and plate system for about $2,300, Scaboo said.

Some scientists at Pittcon, under the banner of Spectroscopists Helping Spectroscopists, were reminding attendees that colleagues working in Puerto Rico are still trying to recover from damage caused by Hurricane Irma in September 2017. The effort is supported by the Society for Applied Spectroscopy and the Coblentz Society.

Past SAS president Ellen Miseo and consultant Frederick Haibach said they began organizing the effort in the fall. So far, they have raised funding from the instrumentation community to bring students to the U.S. to continue their studies. They are also beginning to get commitments from instrument firms to donate repair and refurbishment services to stricken labs. Pittcon’s organizers have also promised a cash donation.

“We’ve all had minor lab catastrophes,” Miseo said. But the devastation in Puerto Rico is on such a large scale that scientists need assistance if they are to continue their work in the island state. She is optimistic that the industry will help.

Instrumentation
Trade jitters come to the fore at Pittcon 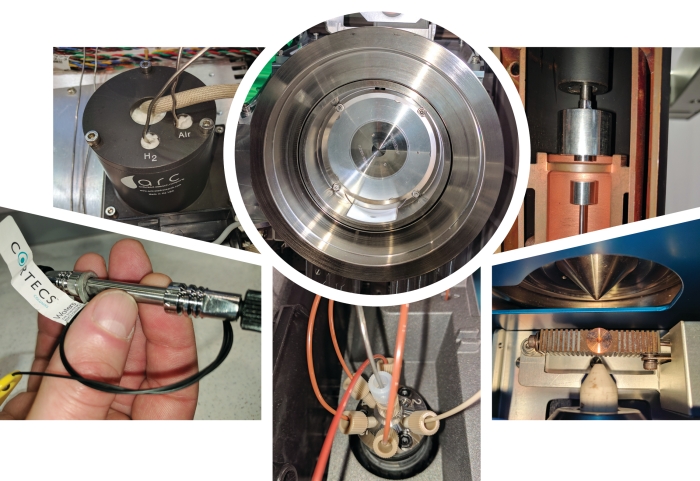 Business
Change comes to Pittcon
Business
Bullishness at Pittcon
Share X
To send an e-mail to multiple recipients, separate e-mail addresses with a comma, semicolon, or both.
Title: Scientific instrument makers at Pittcon predict sunny days ahead
Author: Marc S. Reisch
Chemical & Engineering News will not share your email address with any other person or company.