AbbVie to acquire Allergan for $63 billion

Credit: AbbVie
AbbVie says it needs more sales to keep its research engine going in the face of patent expiration for Humira.

Staring down a future without the lucrative arthritis treatment Humira, AbbVie has responded with a deal to acquire Allergan for $63 billion.

Humira has long dominated lists of the drug industry’s best sellers, bringing in nearly $20 billion in annual sales. Growing US sales of Humira have offset a decline in other markets, where generic versions of the antibody therapy were launched last fall. But the drug will lose patent protection in the US in 2023, and AbbVie has been under pressure to fill the large hole that loss will create.

Acquiring Allergan will add almost $16 billion in annual sales, bringing AbbVie’s sales to about $49 billion and making it, for now, the fourth-largest drugmaker, after Johnson & Johnson, Roche, and Pfizer.

In explaining AbbVie’s thinking behind the deal, CEO Richard A. Gonzalez said the company was planning for the future. “There are a whole range of outcomes that can occur in 2023, and we have a responsibility as the management of this company to make sure we have covered that full range of outcomes,” Gonzalez told investors on a call after the deal was announced on June 25.

Gonzalez said AbbVie needed to get to a size that can support its R&D engine. That meant adding revenues in the range of at least $10 billion to $15 billion, Gonzalez said.

AbbVie says the purchase of Allergan will make it the world’s fourth-largest drug company. 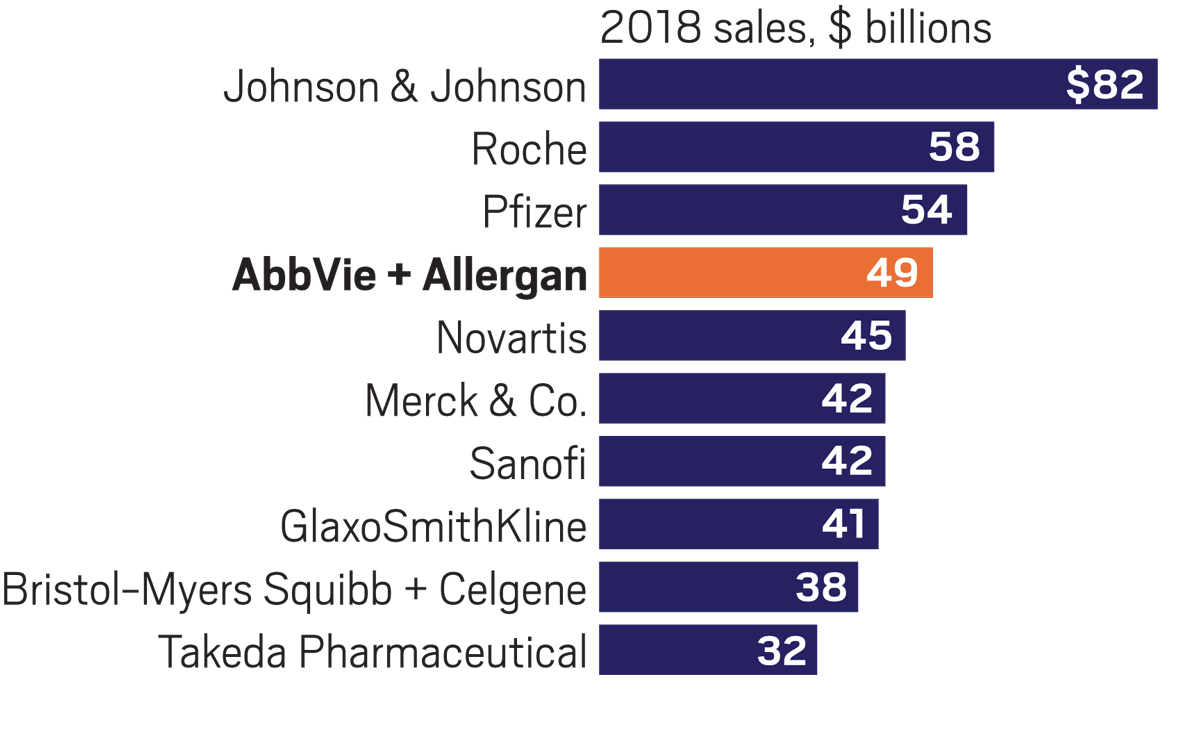 And AbbVie is making that big move now because it’s “in the unique situation now where Humira can essentially pay for these replacement products.”

Much of the new revenue that Allergan will bring comes from its medical aesthetics franchise, which centers on Botox, a wrinkle eraser that in 2018 had revenues of $3.6 billion. Some analysts on the call questioned the security of patents on Botox, an issue Gonzalez said management had closely examined. “It’s a very unique molecule,” he said, adding that for a variety of technical reasons, “it’s highly unlikely we would see a biosimilar against Botox for a long, long time, if ever.”

Although AbbVie worked hard to lay out a compelling argument for the deal, many analysts were left scratching their heads. “Our first reaction this morning: two turkeys don’t make an eagle,” Piper Jaffray analyst Christopher J. Raymond wrote in a note to investors. “Both businesses have seen their share of challenges,” he added, referring to Humira’s coming patent cliff and problems at Allergan, including declining sales, looming generic competition on key products, and ongoing opioid litigation. Before the announcement, Allergan’s stock had lost more than 50% of its value over the past 2 years.

Raymond acknowledged that AbbVie’s potential to improve profits while lowering operating costs over the next 2 years “does have our attention.” AbbVie plans to leave key commercial franchises alone while carving out $2 billion in annual costs, $1 billion of which will come from R&D.

AbbVie is not the only drug firm using a megamerger to mitigate flagging sales. In January, Bristol-Myers Squibb agreed to pay $74 billion for Celgene, a move intended to create an oncology and immunology powerhouse.

That deal has been delayed by scrutiny from the US Federal Trade Commission. BMS recently said it will divest Celgene’s psoriasis drug Otezla, which is expected to bring in $1.9 billion in sales this year, to satisfy regulators.

Finance
Major drug firms have active first half of 2019
Finance
Pharma earnings show rising sales for first half of 2018
Drug Development
Trump’s tweets prompt Pfizer to postpone drug price hikes
Share X
To send an e-mail to multiple recipients, separate e-mail addresses with a comma, semicolon, or both.
Title: AbbVie to acquire Allergan for $63 billion
Author: Lisa M. Jarvis
Chemical & Engineering News will not share your email address with any other person or company.