The start-up, cofounded by Cigall Kadoch, is drugging a molecular machine called BAF, part of the chromatin regulatory system

A decade ago, when Cigall Kadoch joined Gerald Crabtree’s lab at Stanford University, she was an odd fit: the incoming graduate student was determined to do cancer research, but at the time, Crabtree’s group was squarely focused on the brain.

Kadoch had a hunch that BAF might have an unappreciated role in cancer. “A large majority of, if not all, cancers are really driven by a defect in developmental processes,” she says. “To me, BAF screamed cancer.”

Crabtree gave her a bench and let her loose. By 2013, she had made two landmark discoveries. First, she showed that a particular mutation in BAF, previously linked to a shocking 100% of cases of a cancer called synovial sarcoma, hijacks the remodeling machine and throws gene expression completely out of whack. Second, she synthesized an onslaught of recently published tumor sequencing data and calculated that BAF had gone awry in a whopping 20% of all cancers (Nat. Genet. 2013, DOI: 10.1038/ng.2628). “We were just stunned by the preponderance of mutations in this complex,” she says.

Others were surprised, too. In 2014, fresh out of grad school, Kadoch became an assistant professor at the Dana-Farber Cancer Institute and helped kick off a new field of research focused on the role of BAF, other chromatin-remodeling complexes, and their dysregulation in cancer. The potential for new therapies that drug BAF is enormous. In fact, multiple pharmaceutical companies offered to fund her research, but she turned them down to start her own biotech company, Foghorn Therapeutics. 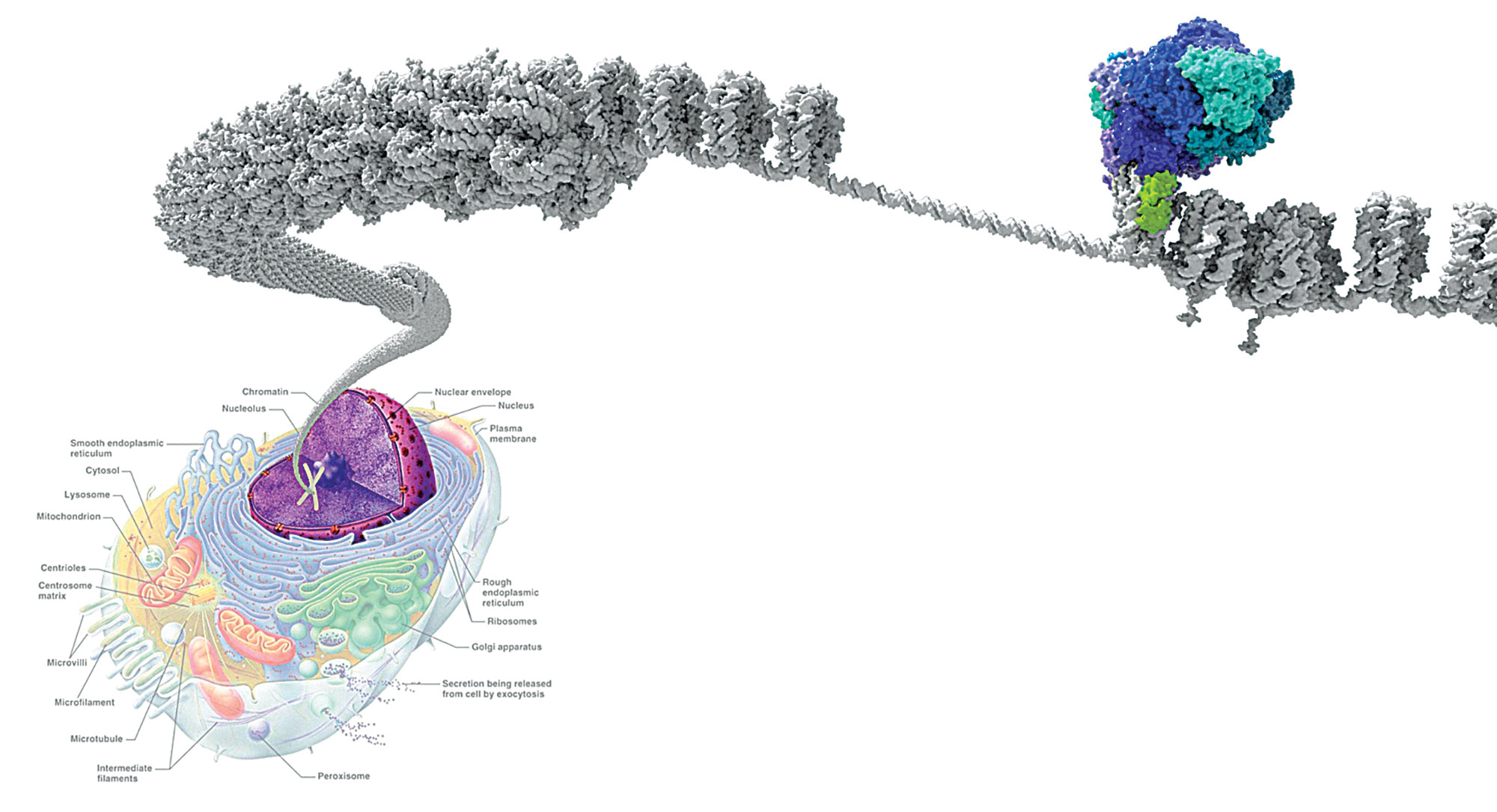 Foghorn Therapeutics/Microverse Studios
DNA is tightly packed inside the nucleus of a cell and must be opened up in order for genes to be turned on. DNA wraps around histone proteins to form nucleosomes, which in turn are coiled into dense chromatin (gray). Molecular machines called chromatin-remodeling complexes (blue) unpack DNA by moving nucleosomes around and removing their histone cores.

Foghorn made its public debut in March 2018 with $50 million from the life sciences venture capital firm Flagship Pioneering, where Managing Partner Doug Cole worked to found the company with Kadoch and Crabtree. In a sign of the start-up’s potential, Carl Decicco left his role as head of discovery at the drug giant Bristol-Myers Squibb in December to become Foghorn’s chief scientific officer. “The science is just unparalleled in its span,” Decicco says. “My job at BMS was to pick winners. I think this is a winner.”

Earlier this year, Foghorn raised an additional $61 million from private investors. Today, the company has grown to nearly 60 employees and boasts 10 active, albeit mostly secretive, small-molecule drug programs, with plans to begin its first studies in humans next year.

When Kadoch worked with Cole to found the company, she was adamantly opposed to Foghorn focusing on just one or two drug candidates with the goal of becoming acquired by a bigger drug company. “We have a much more grandiose vision,” she says.

That’s because BAF contains 15 protein subunits, constructed from a possible 29 genes—and mutations in many of them are now linked to specific cancers.

To turn all this real estate into therapies, Foghorn has two overarching strategies, Decicco says. First, the start-up’s scientists are designing compounds that target individual subunits in BAF. Second, they’re attempting to block the interactions between BAF and other proteins called transcription factors, which can drive the BAF complex in the wrong direction and promote cancer growth.

“It’s all about the machinery being in the right place at the right time,” Adrian Gottschalk, Foghorn’s CEO, explains. “And there are a lot of different ways this goes wrong.”

For instance, mutations in a BAF subunit called SMARCB1 account for nearly all cases of a rare pediatric tumor called malignant rhabdoid tumor. Mutations in other subunits are implicated in a high percentage of certain ovarian and kidney cancers.

One of the best-understood examples of how BAF goes awry, and the first one Kadoch studied, is found in synovial sarcoma, a rare and slow-growing cancer that typically emerges near the joints. In this cancer, a chunk of a protein called SSX is erroneously appended to a BAF subunit called SS18. Kadoch discovered that the resulting fusion protein pushes a critical subunit out of BAF and steers the complex to the wrong places. “It just drags BAF to all the sites you would never want to go and turns on all the wrong genes,” she says. “It is a hijacker.”

Decicco says that Foghorn is working on synovial sarcoma, but he won’t offer any hints about how a small molecule could restore normal SS18 function or otherwise take down cells with dysfunctional SS18.

It’s all about the machinery being in the right place at the right time.
Adrian Gottschalk, CEO, Foghorn Therapeutics

The firm’s two most advanced programs offer a more straightforward path for chemists. Foghorn is developing inhibitors of two BAF subunits called BRM and BRG1. These proteins are the machine’s motors—the ATPase cores responsible for its catalytic activity—and all BAF complexes have one or the other but not both. “They are absolutely critical for the normal functioning of the machine,” Decicco says.

Researchers have found BRG1 mutations in over 30 kinds of cancers, including 12% of all non-small cell lung cancers. Cells with these mutations are effectively limping around with one broken leg. Inhibiting BRM breaks a second leg, stopping cells in their tracks. Foghorn has developed molecules that inhibit both BRM and BRG1 and more recently has managed to make compounds that inhibit BRM only.

Beyond directly targeting BAF subunits, Foghorn has begun screening for drugs that disrupt the interactions between BAF and misbehaving transcription factors. Last year, Kadoch’s lab showed that a mutant transcription factor fusion protein called TMPRSS2-ERG, found in over half of all prostate cancers, binds to BAF and drags the machine to genes it isn’t supposed to turn on (Mol. Cell 2018, DOI: 10.1016/j.molcel.2018.06.040). That hijacking is a recurring theme, Kadoch says. A similar hijacking accounts for 95% of Ewing’s sarcoma.

Although the biology is compelling, drugging transcription factors, or blocking their interactions, is notoriously difficult, since these proteins don’t contain obvious pockets for small molecules to latch onto. Even if the company succeeds, the next challenge will be recruiting the right people—those who have BRG1 or TMPRSS2-ERG fusion mutations in their tumors, for instance—to test its compounds in clinical studies.

The multitude of mutations in the chromatin regulatory system gives Foghorn lots of room to grow. There are even a handful of cases beyond cancer in which dysfunctional chromatin remodeling is known to cause disease. At a conference in Cambridge, Massachusetts, at the end of April, Kadoch presented ongoing work in her lab to understand the role of BAF mutations in multiple rare intellectual disability syndromes—research that harks back to Crabtree’s early work in studying the machine’s roles in brain development.

Related: Epitranscriptomics: The new RNA code and the race to drug it

And although Foghorn has a head start, it’s not the only company looking to design drugs that affect the chromatin-remodeling process. Right after Kadoch’s talk, at that same conference, Jay Bradner, the head of the Novartis R&D arm in Cambridge, announced that the firm is also developing inhibitors of BRM and BRG1.

For Foghorn, the announcement is validation that it’s on the right track. “We love that fact,” Flagship’s Cole says. “Because at a certain point if nobody else is coming into the field, you start to wonder who is smart and who is not.”

Share X
To send an e-mail to multiple recipients, separate e-mail addresses with a comma, semicolon, or both.
Title: Foghorn Therapeutics takes aim at chromatin hijackers to stop cancer
Author: Ryan Cross
Chemical & Engineering News will not share your email address with any other person or company.