GIANTS
[+]Enlarge
Credit: Vladimir Prelog
Brown (left) and Winstein pose together in 1953 at a chemistry conference. 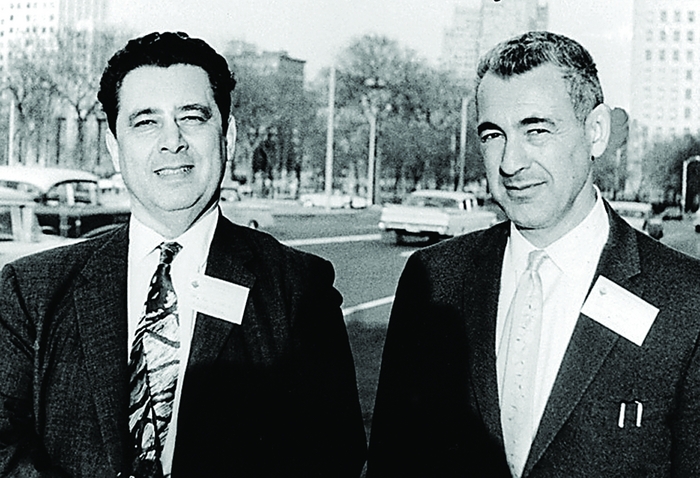 Credit: Vladimir Prelog
Brown (left) and Winstein pose together in 1953 at a chemistry conference.

From the 1960s to the 1980s, physical organic chemists fought over the structures of the 2-norbornyl cation and similar ions. The controversy started as a disagreement between two major players in the field: Herbert C. Brown of Purdue University and Saul Winstein of the University of California, Los Angeles. Other chemists soon joined the debate, arguing at scientific meetings, in journal articles, and through prickly letters.

But organic chemists point out that Winstein’s legacy is much greater than that of the leader of one side of this fierce scientific row. Students learning organic chemistry mechanisms bump into many con­­cepts discovered or expanded on by Winstein.

Last month at UCLA, Winstein’s former students, colleagues, and family celebrated what would have been his 100th birthday. They gathered at a symposium hosted and organized by Kendall N. Houk, the Saul Winstein Chair in Organic Chemistry at UCLA. Chemists discussed how Winstein influenced organic chemistry not only through new mechanistic ideas but also through his thorough, detailed approach to posing and then answering chemical questions.

“He was devoted to tearing apart the complexities of science to get to the core fundamentals,” said Jeffrey I. Seeman, a chemical historian at the University of Richmond, in an interview with C&EN after the event. “He applied his whole energy to the most fundamental questions of his time.”

Winstein was born in Montreal in 1912 but spent most of his life in Los Angeles. He received a bachelor’s and a master’s degree from UCLA. He then traveled across the city to California Institute of Technology, where he earned a Ph.D. in 1938. He joined the chemistry faculty at UCLA in 1941 and remained there until his death in 1969.

Winstein set the stage for what would be called the nonclassical ion debate with a 1949 paper in which he tried to explain curious observations from the solvolysis reactions of two isomers of 2-norbornyl brosylate (J. Am. Chem. Soc., DOI: 10.1021/ja01176a536). For example, the reaction rate for the isomer with the brosylate group in the exo position was 350 times faster than that of the endo isomer.

THE DEBATE
[+]Enlarge
The reaction rate for the solvolysis of exo-2-norbornyl brosylate (left) is 350 times faster than that of the endo isomer (right). Winstein proposed a nonclassical cation intermediate to explain this difference.

The reaction rate for the solvolysis of exo-2-norbornyl brosylate (left) is 350 times faster than that of the endo isomer (right). Winstein proposed a nonclassical cation intermediate to explain this difference.

He proposed that in the exo isomer, electrons from a carbon-carbon single bond near the brosylate help push off the leaving group, accelerating the reaction. This mechanism produces a cationic intermediate with a nonclassical bonding structure in which the two electrons delocalize over three carbon atoms. The geometry of the endo isomer doesn’t allow for assistance by these electrons, so its reaction is slower, Winstein proposed.

At scientific meetings in the early 1960s, Brown started to question this mechanism and the existence of the nonclassical ion. He thought the 2-norbornyl observations could be explained without invoking a new type of carbon bonding. Brown thought that these rate differences could be explained on the basis of steric strain. He further asserted that the 2-norbornyl cation actually existed as two equilibrating structures with classical bonding.

As chemists argued over nonclassical ions, “there were meetings and letters in which people were crude and rude,” Seeman said. In a 1954 letter from Brown to Caltech’s John D. Roberts, one of Winstein’s closest friends and colleagues, Brown compared the heated rhetoric from the nonclassical proponents to the spicy kick in peppers found in the southwestern U.S., including the Los Angeles area. Noting that some agriculturists attributed the pepper’s heat to the Southwest’s soil and climate, Brown wrote, “The Southwest must have a similar effect on the fauna of the region.”

The controversy continued after Winstein’s death but eventually fizzled out in the early 1980s. Now chemists accept the nonclassical ion, partly on the basis of nuclear magnetic resonance data reported by George A. Olah of the University of Southern California and theoretical studies by Paul von Ragué Schleyer of the University of Georgia.

But Winstein was much more than a proponent for nonclassical ions, Seeman said. His mechanism for the formation of the 2-norbornyl cation is an example of an effect that he coined neighboring group participation. Winstein’s mechanistic work also investigated ion pairs formed during substitution reactions. He explained how intimate ion pairs, ones in which no solvent molecules separate a cation and anion, can influence the stereochemistry of substitution reactions.

Winstein also pioneered work on homo­aromaticity to understand molecules that have aromatic-like properties and stabilities but lack the characteristic continuous ring of π orbitals.

Along with the litany of organic chemistry concepts he described, Winstein’s colleagues and students also drew inspiration from his drive to understand topics at an exquisite level of detail. They point to his Thursday night seminars as an example of how he tried to analyze every piece of data and question each conclusion. Speakers would start their talks around 7:30 PM and often not stop until 11 PM, because Winstein peppered the scientists with questions, trying to fully comprehend their research.

Roberts remembered one seminar in which a professor from Indiana University started his talk by saying that he wanted to first discuss a topic most wouldn’t understand. “That was a challenge to Saul,” Roberts said. “He held up everything until he was satisfied he could understand it. In fact, the man never did get to give his talk.”

Winstein’s colleagues also expressed sadness that his death at 57 cut short his career. “His early departure in all probability preempted a spectacular period of contributions,” Olah said. And there’s no telling what those discoveries would have been, said Martin Saunders of Yale University, “because we aren’t nearly as smart as him.”

Comments
Ken Houk (November 19, 2012 2:02 PM)
Thanks very much for this article. Saul Winstein's legacy lives on in chemistry and especially at UCLA because of his discoveries, the spirit and standards that Winstein helped establish here, and the continuing support of UCLA from the Winstein family.
Reply »

Bob Buntrock (December 1, 2012 4:22 PM)
My thanks also for this article. In the Spring of '63, I took a course from Paul Schleyer at Princeton, title Reactive Intermediates, and we spent most of the time on carbonium ions, specifically NCCIs. Schleyer was somewhere in the middle of the "fight" between Winstein and Brown and brought us advance details of Chris Foote's correlation of tosylate solvolyses and C=O stretching frequencies. One of the best coruses I ever took,on the "bleeding edge" of current research. Excellent documentation in "Nonclassical Ions" by P. D. Bartlett (Benjamin, 1965).
Reply »

Bob Buntrock (December 1, 2012 4:26 PM)
In the previous comment, I forgot to point out that Chris Foote was a Winstein postdoc when theis work was published.
Reply »

Anthony Skrobul (February 14, 2013 4:30 PM)
Thanks for the excellent article. During my career as an organic chemist Prof. Winstein was one of the giants. My advisor at Purdue (Dr. R. A. Sneen) had been a research associate of Prof. Winstein, and he always spoke of Dr. Winstein with reverence. Of course Dr. Brown was at Purdue during my graduate student years, and to Dr. Brown the NCCI debate was far from settled.
Reply »