Can shellfish adapt to ocean acidification? 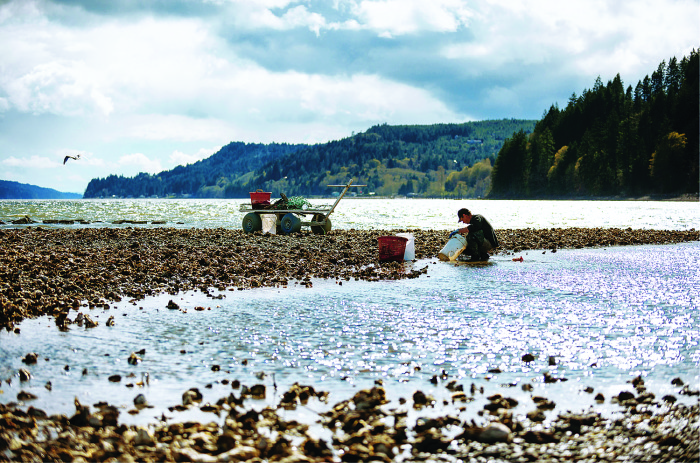 If you’re an oyster aficionado living in the Pacific Northwest, you’ve likely tasted Chris Langdon’s scientific handiwork. Since 1996, his Molluscan Broodstock Program at Oregon State University has been breeding plump, fast-growing, and hardy oysters as stock for the $250 million West Coast oyster industry. But in the past several years, the program has taken on an additional goal: identifying and studying oysters that may be better prepared to thrive in an increasingly acidified ocean.

In 2007, oyster hatcheries in Oregon and Washington began experiencing massive die-offs of their larvae that continued for several years. Eventually, managers and scientists realized that the larvae were dying during periods of strong upwelling, when deep waters rich in CO2—and low in pH—come to the surface. These deep waters were even more acidified than in the past because of the oceans’ increasing uptake of CO2 from an atmosphere where levels of the greenhouse gas have been growing. When CO2 dissolves in water, carbonic acid forms, releasing hydrogen ions that lower pH. These ions convert carbonate ions already in the seawater to bicarbonate.

The corrosive upwelling in 2007 dropped carbonate levels in the seawater enough that aragonite, the main form of calcium carbonate that bivalves use to build shells, became undersaturated. Langdon and his colleagues showed that aragonite undersaturation ultimately drives oyster larvae to make smaller shells than usual or to not develop them at all (Nat. Clim. Change 2015, DOI: 10.1038/nclimate2479). Both outcomes can spell death.

Scientists, including Langdon’s colleague Burke Hales, quickly began working with oyster growers to monitor carbonate chemistry in hatcheries and to buffer the water with sodium carbonate when aragonite became undersaturated during upwelling episodes. In 2010, the National Oceanic & Atmospheric Administration sponsored a $500,000 network of six monitoring systems at West Coast hatcheries.

Since 2011, this intervention has helped avert major larval die-offs, Langdon says. But the experience made it clear that ongoing ocean acidification, which threatens marine organisms ranging from certain plankton at the base of the food chain to shellfish and corals, could endanger the shellfish industry worldwide.

Fortunately, evidence exists that some shellfish may be able to acclimate or adapt to these changes, thanks to the variable conditions these creatures experience and the wide genetic variation among individuals in a given species. Because oysters reside in intertidal zones, where they’re submerged at high tide and exposed at low tide, they see a lot of environmental change even daily, says Steven Roberts, a fisheries scientist at the University of Washington.

[+]Enlarge
Credit: Shutterstock
Scientists would like to know how shellfish such as oysters (top) and geoducks (bottom) respond to acidified waters. 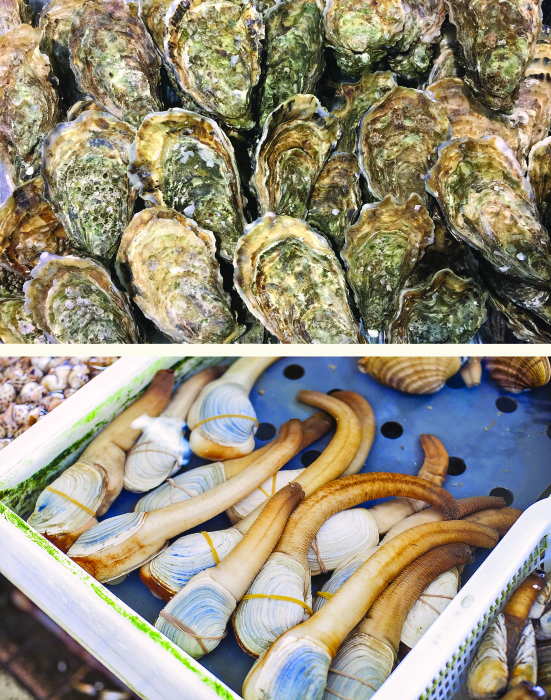 Credit: Shutterstock
Scientists would like to know how shellfish such as oysters (top) and geoducks (bottom) respond to acidified waters.

In an effort to identify hardier shellfish stocks, Langdon, Roberts, and many other researchers are exploring the genetic and metabolic underpinnings of how these creatures might be adapting to ocean acidification. The scientists are on the hunt for biomarkers that could eventually help shellfish growers select more resilient stock or adjust hatchery conditions for improved survival and growth.

Langdon was inspired by University of Sydney researcher Laura Parker’s work showing that in acidified conditions, stocks of the Sydney rock oyster bred for aquaculture grew shells better than did wild oysters, suggesting that the species has the genetic potential to adapt to ocean acidification and that selective breeding for good hatchery performance could be a key to this. But Langdon’s first attempt to repeat this experiment with his stock of Pacific oysters from the Molluscan Broodstock Program did not show the same advantage: The bred oysters fared about the same as their wild counterparts.

So he and his colleagues are now testing the survival of a variety of farmed oyster stocks in acidified conditions similar to those found during upwelling and comparing them with stocks grown in ambient seawater conditions. The team is sequencing the oysters’ DNA and tracking gene expression to identify genes and metabolic pathways associated with better survival and growth in acidified conditions.

The sequencing of the Pacific oyster genome, achieved in 2012, has made this effort much easier, revealing the function of thousands of oyster genes. But many details are still unclear, including the exact cellular machinery oysters use to form their shells and how it becomes dysfunctional when the chemical environment around the oysters changes, says Pierre De Wit, an evolutionary biologist at the University of Gothenburg who is collaborating with Langdon. Before oysters’ resilience can be understood, these questions will need answers.

For oysters, the first 24 hours of development are critical: They have to deposit a lot of shell quickly. In one of the earliest steps, certain proteins produced inside larval tissue are transported to an extracellular compartment surrounding the larva. There, the proteins form a scaffold on which calcium carbonate crystals precipitate. Meanwhile, protease inhibitors prevent the breakdown of these proteins. De Wit has found that acidified conditions seem to affect expression of both the scaffolding proteins and the inhibitors. “In stressed larvae, this protein matrix could get disorganized and prevent larvae from forming proper shells,” he says.

But this is only one of many factors that are involved in oysters’ response to ocean acidification. So far, De Wit and Langdon have found about 50 genes whose expression is delayed in oyster larvae during the first 18 hours of development while exposed to lower pH. These genes are involved in shell matrix formation, transport of cellular cargo inside larval cells, and transport of ions across cell membranes. Based on these studies, “it may be possible down the road to develop genetic markers that will allow us to identify stocks that are more resistant to ocean acidification,” Langdon says.

Other researchers are looking beyond aquaculture to wild shellfish for hallmarks of adaptation that growers might eventually exploit. Studies of sea urchins and rock oysters show that some organisms exposed to lower pH have offspring that are more resilient to these conditions, indicating some capacity for adaptation to acidification.

In Long Island Sound, south of Connecticut’s shores, where pH varies widely because of the effects of nutrient pollution, Bassem Allam of Stony Brook University is trying to detect how wild samples of eastern oysters and hard clams may adapt to acidification. In previous studies on the clams, he and his team identified gene variants called single-nucleotide polymorphisms (SNPs) that are linked with resistance to the parasitic disease QPX. He’s now using a similar approach to identify potential SNPs that confer tolerance to ocean acidification.

In addition to DNA sequence variations such as SNPs, epigenetic changes may also help shellfish tolerate stress. These are chemical modifications to DNA, or to proteins associated with the DNA, that influence gene expression. They can be heritable—passed over generations—and may preserve a “memory,” or history, of environmental conditions the organisms encountered. To investigate this, the University of Washington’s Roberts and Hollie Putnam of the University of Rhode Island are working to jog the memory of giant clams of the Pacific Northwest called geoducks, which represent a $74 million industry in the U.S.

In one experiment, Putnam exposed juvenile geoducks to ambient and acidified treatments for about three weeks. Then she returned both groups to ambient conditions and tracked their growth for several months before exposing them both to acidified conditions. “They do seem to have a memory of what they experienced early on,” she says. Geoducks exposed to lower pH initially grew more slowly than control clams but then made up for this by growing faster when switched to ambient conditions. They also grew faster than control clams when re-exposed to lower pH. “It suggests environmental history is important in how they respond to future stressors,” Putnam says. Eventually, hatcheries might carry out similar treatments to bolster the tolerance of their stocks, she says.

But it’s early days for such solutions. In the short term, NOAA expanded carbonate chemistry monitoring in shellfish hatcheries and coastal waters along the West Coast, including Alaska, with a three-year, $1.5 million grant in 2015. And although the West Coast has been a sentinel for ocean acidification because of its upwelling, shellfish growers elsewhere are also facing change. Parts of New England, the Chesapeake Bay, the Gulf of Mexico, the East China Sea, the Baltic Sea, and more are considered ocean acidification hot spots for various reasons, including coastal pollution and river input, which can dilute carbonate concentrations.

In 2013, Maine oyster grower Bill Mook installed a monitoring system similar to those on the West Coast after larvae die-offs at his Mook Sea Farm. Developed by the University of New Hampshire’s Joe Salisbury with NOAA support, it’s nicknamed the “black box”; more such systems may be needed in these hot spots before long.

Pollution
Satellites can now see air pollution inequality within cities
Persistent Pollutants
Goodbye to some PFAS in food packaging
Pollution
Mercury makes it deep into marine trenches
Share X
To send an e-mail to multiple recipients, separate e-mail addresses with a comma, semicolon, or both.
Title: Can shellfish adapt to ocean acidification?
Author: Deirdre Lockwood
Chemical & Engineering News will not share your email address with any other person or company.