Chemours is C&EN’s company of the year for 2017

Despite obstacles, the DuPont spin-off managed to stand on its own and even prosper 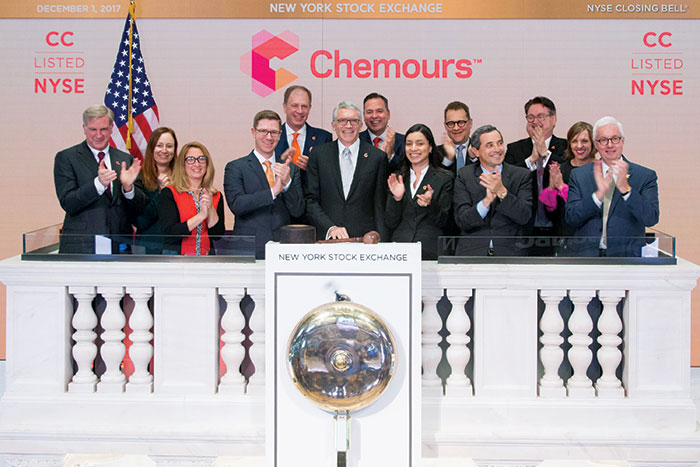 Life is rarely easy for spin-offs—companies cobbled together from operations that no longer fit with the grander ambitions of larger corporations.

How C&EN makes the choice

C&EN’s Company of the Year is the firm that stands out across the global chemical enterprise. Editors and reporters in C&EN’s business department start by nominating candidates. Over several weeks, the team discusses these options, winnowing the list down to three choices and then a final selection. The factors the team considers include financial and technological performance, notoriety, and the consequences—good or bad—of the company’s actions on the industry and the larger world.

Spin-offs are usually saddled with high debt and legacy liabilities such as retiree benefits and environmental costs. Often they have to foot these bills with cash generated from aging, cyclical businesses. Such issues forced the chemical spin-offs Solutia and Tronox into bankruptcy in the 2000s.

After Chemours was spun off from DuPont in 2015, it looked like the firm could similarly crash on the rocks. DuPont loaded Chemours with debt. Its businesses in titanium dioxide, fluorochemicals, and scattered other chemicals weren’t generating much profit. And it faced thousands of personal injury lawsuits related to chemical plant emissions.

“At spin, it became abundantly clear that the strength of our portfolio with its world-leading brands and market positions was being overshadowed by an uneasy market sentiment fueled by our legacy liabilities and significant debt,” CEO Mark Vergnano told analysts at an investor day in New York City last month. “We definitely had our work cut out for us.”

Two years after launch, everything has changed. Chemours has cut costs, jettisoned businesses it didn’t need, invested in its better prospects, reduced its debt burden, and settled its immediate environmental risks. The company’s stock price, instead of plunging to zero as some predicted, is nearly triple what it was at spin-off.

The about-face wasn’t without hardship. Hundreds of workers received pink slips, and environmental concerns were addressed only in part. But for accomplishing the most dramatic chemical industry turnaround in recent memory, Chemours is C&EN’s company of the year for 2017.

DuPont decided to divest its performance chemicals unit back in 2013. To then-CEO Ellen J. Kullman, the operations that made up the division, more than a century old in some cases, were no longer a good match for science-oriented businesses such as enzymes and Kevlar.

When Chemours finally launched in 2015, it was strapped with nearly $4 billion in debt. Its largest business, the manufacture of the white pigment titanium dioxide, faced a cyclical downturn. The company generated a modest before-tax margin of 10% on $5.7 billion in sales.

What’s more, Chemours faced an existential crisis over pollution. Perfluorooctanoic acid (PFOA), used to make fluoropolymers such as Teflon, leaked for years from DuPont’s facility near Parkersburg, W.Va., contaminating the drinking water of communities along the Ohio River.

The plant went to Chemours with the spin-off. And the new owner was on the hook for financial compensation to victims, who filed more than 3,500 personal injury cases against DuPont and Chemours. Most of them were related to thyroid disease or high cholesterol, but 8% were for cancer allegedly related to PFOA exposure.

DuPont and Chemours faced big payouts in the courts for the more serious diseases. One bellwether claimant with kidney cancer was awarded $1.6 million. 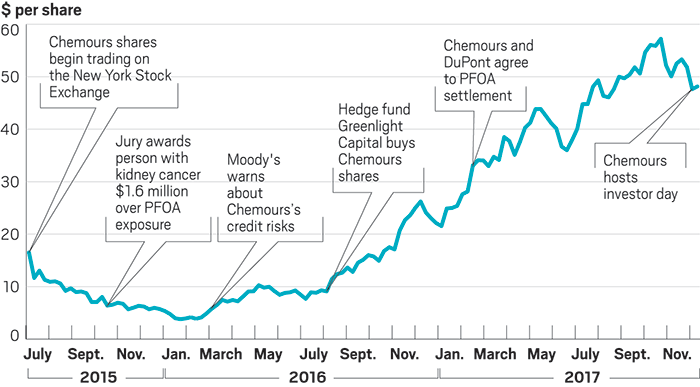 After bottoming out in early 2016, Chemours's stock price has been a big gainer.

In early 2016, Chemours’s stock price bottomed out at a little above $3.00 per share, about a fifth of its value at spin-off. That February, the credit rating firm Moody’s warned investors about Chemours’s debt because of the environmental risks and anemic earnings.

It appeared as though Chemours and DuPont were in for many grim years in court, but in a surprise agreement early last year, they reached a settlement whereby they split $670 million in payments to the more than 3,500 plaintiffs. Chemours’s stock price jumped 12.5% the day the settlement was announced. However, the company isn’t completely in the clear. PFOA-related contamination has been reported, for instance, at a site in the Netherlands where the firm used the fluorosurfactant.

But Chemours’s turnaround didn’t just happen in the courtroom. At spin-off, management rolled out a transformation plan involving cost cutting, portfolio trimming, and investing in its most promising businesses.

Chemours has kept to the script. The firm is on track to reduce annual costs by $450 million, in excess of a $350 million goal it set at launch. The measures were painful. The company shed about 1,600 jobs, or 20% of its overall workforce.

A lot of Chemours’s restructuring focused on its chemicals business, a hodgepodge of unrelated chemical plants that is the company’s smallest unit. Chris Siemer, president of Chemours Chemical Solutions, told analysts at the investor day that the unit was just breaking even at the time of the spin-off.

Chemours’s Belle, W.Va., site was once one of DuPont’s biggest facilities. Most of the units on the property were shut down over the years, but the overhead at the site didn’t change accordingly, Siemer said. Chemours cut 60% of the workforce there and resuscitated Belle-based businesses such as methylamines and glycolic acid.

Chemours shut down businesses in Niagara Falls, N.Y., that made sodium and lithium metal. That action alone resulted in 200 layoffs.

The firm also divested several chemical business operations. It sold its sulfur products business to the waste management specialist Veolia, its disinfectant business to Lanxess, and an aniline plant to Dow Chemical. The sales generated nearly $700 million in proceeds.

The chemical solutions business is also investing. This summer, it started construction on a $150 million plant in Durango, Mexico, that will make sodium cyanide used to extract gold from ore.

Other Chemours units didn’t see as much upheaval. Time healed the wounds at its titanium dioxide business—the world’s largest TiO2maker—as demand from the paint industry and other markets grew, gobbling up excess industry production.

The company contributed to the improved supply-demand balance by closing its Edgemoor, Del., plant as well as an older line at its New Johnsonville, Tenn., plant in 2015. Later, Chemours built a new TiO2plant in Altamira, Mexico.

The fluorochemicals business houses Chemours’s most audacious investment: $300 million for a plant in Corpus Christi, Texas, that will triple capacity to make its Opteon hydrofluoroolefin refrigerants. The firm expects to see 20% annual growth for the low-global-warming-potential refrigerants as they are adopted for automotive and stationary air-conditioning.

The company is also making structural changes to R&D. It is moving 330 scientists from DuPont’s Experimental Station in Wilmington, Del., to a $150 million facility it is building at the University of Delaware’s Science, Technology & Advanced Research Campus 25 km away in Newark, Del.

The changes at Chemours are accompanied by a dramatic turnaround in finances. Its before-tax earnings have grown by 2.5 times, to $1.4 billion, while its net debt load has declined by about $1 billion.

The company is also feeling confident about its cash flow. Last month it quintupled its dividend and authorized a $500 million share repurchase. Management says it is even willing to make modest acquisitions.

No doubt, Chemours had a scorching two years. The question now is whether it can keep up the pace. Goldman Sachs stock analyst Robert Koort thinks momentum will slow. He downgraded his rating on Chemours’s stock from “buy” to “neutral” after the investor day. “We have been enthusiastic supporters of Chemours’ transformation plan,” Koort wrote to clients. But he argues that the recovery in TiO2 has peaked, and he is unimpressed by refrigerant forecasts.

Environmental issues are bubbling up again for Chemours as well, this time over discharges of GenX, a replacement for PFOA, and other compounds, from its Fayetteville, N.C., plant. The state of North Carolina pulled a wastewater permit from the facility. And Chemours faces a class-action lawsuit from nearby residents as well as accusations that it hasn’t been forthcoming about the issue with the media and the community.

At its investor day, Chemours’s general counsel, Dave Shelton, told the audience that the plant remains open as it trucks wastewater off site for disposal. The firm is negotiating with authorities over permits and doesn’t believe its discharges caused injury in the community. Shelton claimed Chemours has been taciturn with the press because of the litigation and “out of respect” for its discussions with authorities.

We can’t yet know whether GenX will become as serious for Chemours as PFOA and whether the firm has room to improve its businesses further. But it is clear right now that Chemours has made the most of businesses DuPont didn’t want and proved the naysayers wrong.