Credit: SynDaver
No croaking: SynFrog takes the death out of dissection.

We at Newscripts are fans of the messy and smelly sciences. But while we recall our high school experiences of frog dissection day with fondness, teachers report the feeling is not universal.

Indeed, many students ask to be excused from the exercise. But alternative activities such as digital dissection lack the tactile verisimilitude of a real frog. Now, a Florida company’s educational tool is poised to make the leap into classrooms to solve the myriad downsides of frog dissection.

Those downsides include preservative chemicals requiring special handling, the unappetizing formaldehyde smell, and the fact that preserved frogs don’t even look or feel much like living frogs. And then there’s all the killing. Each year, 3 million frogs are taken from the wild and dispatched, not always humanely, for use by students, according to People for the Ethical Treatment of Animals.

For all those reasons, SynFrog could be a big hit with both teachers and students. The faux amphibian looks and feels just like a real, live frog on the outside and the inside, from its buggy eyes to its stretchy intestines to its webby feet.

Christopher Sakezles is the man behind the frog. As CEO of SynDaver, he has already developed realistic anatomical models of humans, dogs, and cats that are used by medical and veterinary students. He brought the synthetic frogs to J. W. Mitchell High School in Tampa, Florida, for their biology class debut.

“They were all engaged—indeed, they were fingers deep in the synthetic frogs,” Jessica Schultz, the principal of the school, said at a news conference.

Sakezles says the frogs are constructed with materials made from varying recipes of water, salts, and cellulose-based fibers. Inside the hydrogel matrix, fibers and fiber meshes provide support for the various organs. SynDaver makes its human and pet models with silicone composites and with fibers made of nylon, polyester, and other polymers.

A new fake frog costs $150, but SynDaver can rehabilitate and return the cut-up critters for $8 apiece, which helps with expenses. Next up, Sakezles says, is a fetal pig to be introduced early this year.

Science students who decide they dislike dissections may turn instead to engineering, but that field has its own intimidating hurdles. For instance: fluid dynamics class. The movements of invisible molecules of liquid or gas being pushed around by invisible forces can be difficult to, well, visualize.

But full-time mechanical engineering professor and part-time tango dancer Jesse Capecelatro is working to make the concepts more intuitive. He partnered with a University of Michigan colleague, choreographer Veronica Stanich, to develop dances that illustrate principles in physics.

“We started with just three dancers, and it was a bit weird, but everyone was really engaged—you’d think engineering students might shy away from it,” Capecelatro tells Newscripts. As it often happens, a bit of funding made the difference, and they were able to recruit nine dancers.

The first activity was to teach principles of fluid dynamics to Stanich. “The language she uses is very similar to language we use in fluid dynamics—there’s resistance, what you are doing relative to other dancers, what is your movement, and the direction of flow on the dance floor,” Capecelatro says.

They agreed on a set of rules for the dancers to keep their moves true to the principles of fluid flow. With that groundwork, they crafted a performance depicting flow past a cylinder. At first, dancers rotate slowly near the cylinder. Speed up the dance, though, and the moves show more chaotic vortices.

Newscripts wanted to know what other concepts Capecelatro would like to illustrate with dance. “We did try laminar flow versus turbulent,” he says. “In my dream I imagined 200 dancers, but we don’t have quite enough dancers to show that many molecules.” 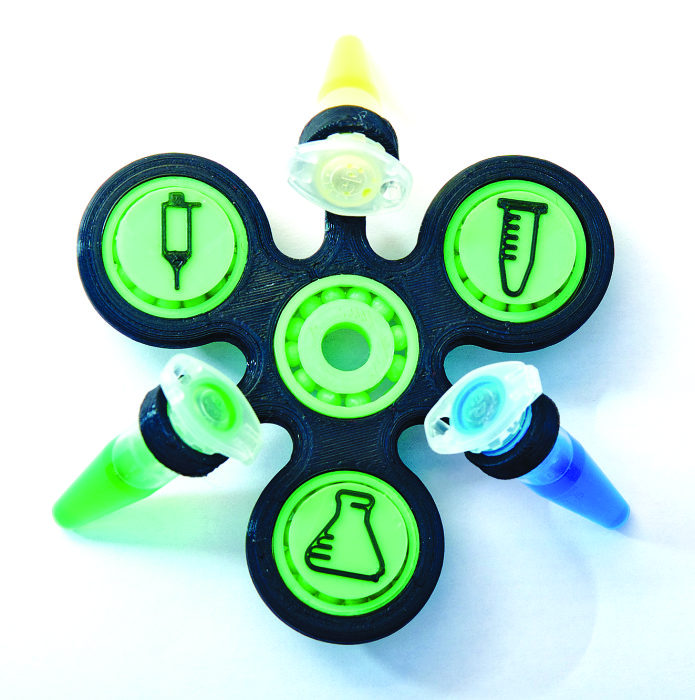 Materials
Spirals, spinners, and science
Share X
To send an e-mail to multiple recipients, separate e-mail addresses with a comma, semicolon, or both.
Title: Synthetic frogs, and dancers teach science
Author: Melody M. Bomgardner
Chemical & Engineering News will not share your email address with any other person or company.