Celebrating science by the slice and a chemistry promposal

Science by the slice 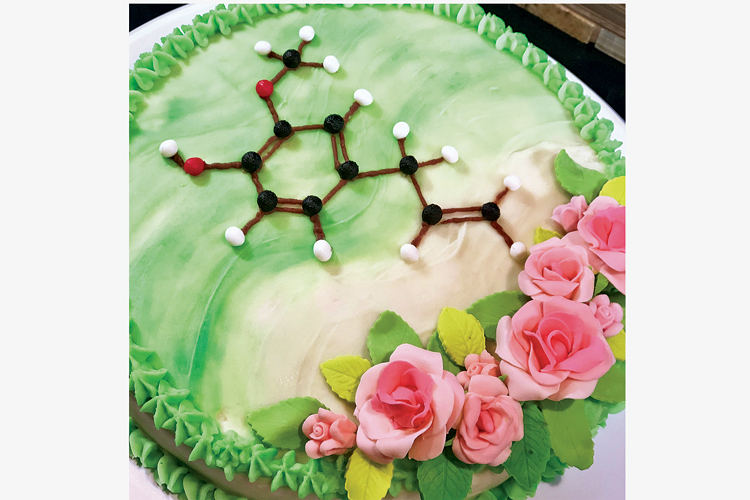 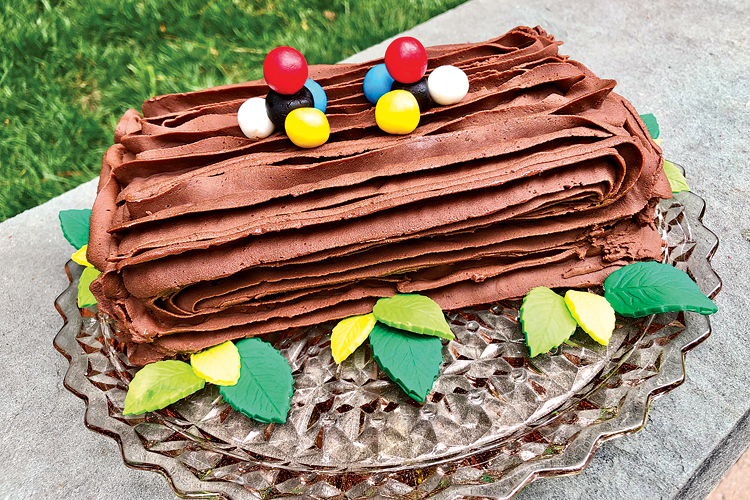 Credit: Maria Gallardo-Williams
Teaching about enantiomers—molecules that are mirror images of each other —was the subject of a paper published by Gallardo-Williams, so she made models from fondant on this celebratory cake. She flavored the fondant with spearmint, which contains carvone, a molecule mentioned in the paper. 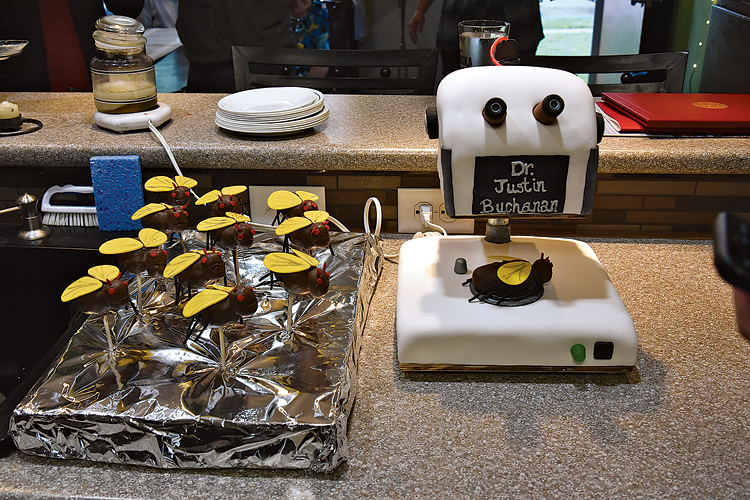 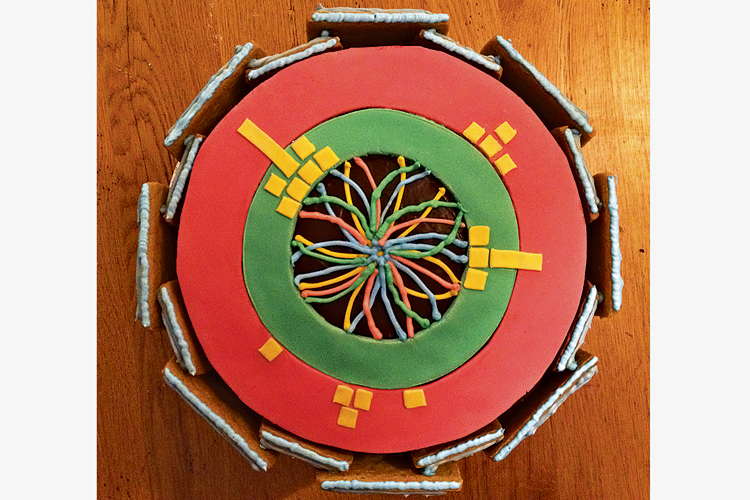 Credit: Katharine Leney
Katharine Leney and Katy Grimm, creators of the Physics Cake twitter feed, made this cake depicting the ATLAS particle detector at the European Organization for Nuclear Research (CERN). They both work on the ATLAS project. 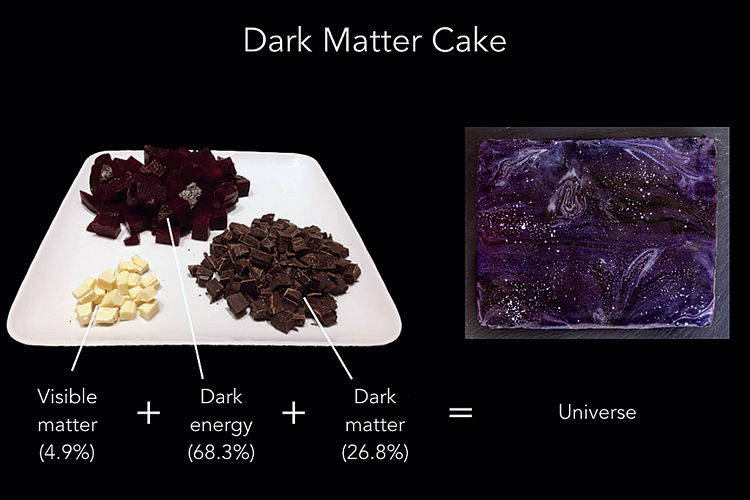 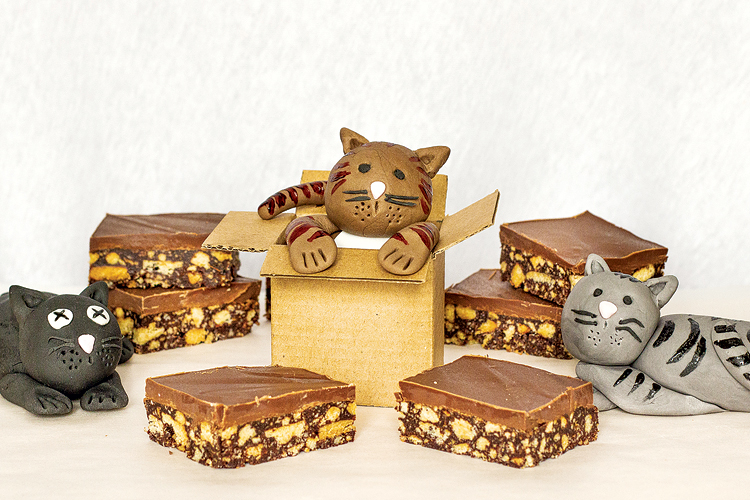 Credit: David Morse
Leney’s Schrödinger’s Kit Kat cake was designed to illustrate the concept behind Schrodinger’s cat. Some pieces of cake contained a Kit Kat and some didn’t. But you didn’t know until you cut the cake. 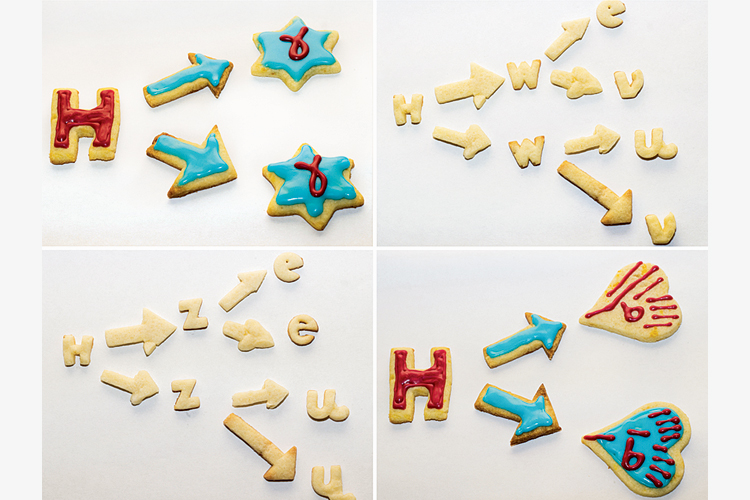 Credit: David Morse
These cookies depict the decay of the Higgs Boson into its constituent parts. 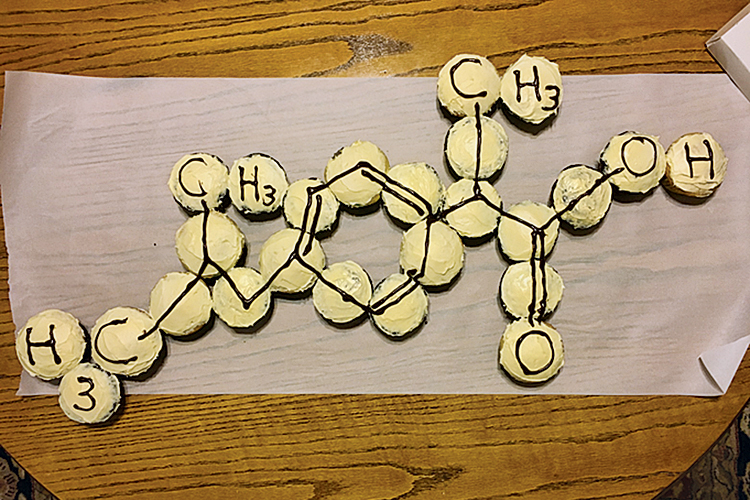 Credit: Maria Gallardo-Williams
Gallardo-Williams gives her North Carolina State University students a chance to represent a molecule that is important to them in whatever way they want. Taylor Norburn chose ibuprofen inthe form of cupcakes. 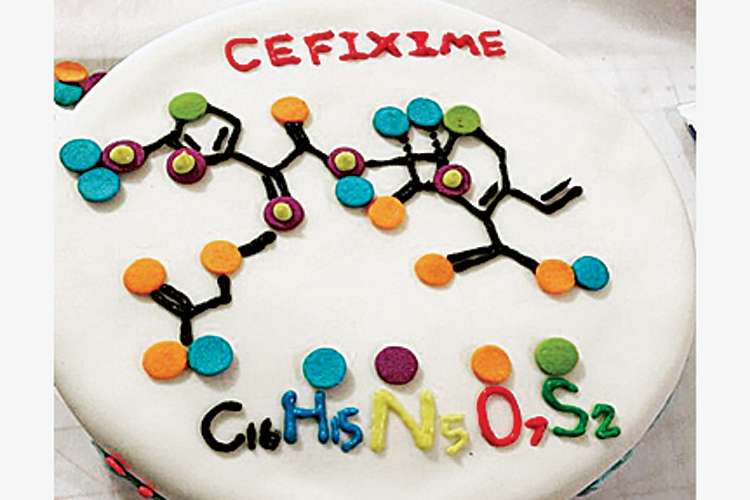 Maria Gallardo-Williams always liked to bake. Growing up in Venezuela, she was a huge fan of three single women who owned their own cake-decorating business, which was rare back then. “They just baked cake and kicked butt,” she remembers.

But when she started down the road to a career in chemistry, Gallardo-Williams hid her interest in baking from her colleagues. “I didn’t think they would think I was a serious chemist. Which I am.”

That is until 5 years ago, when she decided to come out of the kitchen, so to speak. Gallardo-Williams, a teaching professor at North Carolina State University, started bringing cakes to work. Now she bakes cakes to celebrate her publications or to lure faculty and students to events. “My committee meetings are very well attended,” she tells Newscripts.

Katharine Leney, cofounder of the Twitter feed Physics Cakes, says cakes are amazing ways to communicate complicated topics to the public. “It is quite accessible if I say I can explain dark matter to you using a piece of cake,” she says.

Another favorite was Leney’s Schrödinger’s Kit Kat cake, a nod to physicist Erwin Schrödinger’s quantum mechanical thought exercise about a cat in a box. Some pieces had a Kit Kat inside and some didn’t—and you wouldn’t know until you took a bite. “I like that one for the pun, if anything,” Leney says.

Science cakes can also be recognition for a job well done. To celebrate Justin Buchanan’s PhD from the University of Nebraska–Lincoln, his parents, Jeff and Trish, commissioned a cake from a local baker.

Buchanan studied the costs to fruit flies of mounting an immune response. “I spent a lot of time under the scope counting, sorting, and infecting flies,” he says. So the cake features a microscope complete with gumdrop knobs, plus chocolate flies with red eyes and yellow wings. “The uniqueness of the cake is what made it so special and why so many thought it was incredible,” his parents say.

Gallardo-Williams’s next big chemistry cake will celebrate her department’s 130th anniversary later this year. “I’d like it to be like a wedding cake but all chemistry.”

Usually, though, her cakes aren’t about science. But even cakes for her kids get appropriated by the chemistry community. A soccer ball cake she made for her son immediately got tagged as a buckyball, she says. “When you are a nerd, everything looks like chemistry to you.”

Nerdy chemists will especially appreciate this grand gesture by a student at Harford Technical High School in Maryland. High school students nowadays face a lot of pressure to come up with an extravagant “promposal” to invite their love to the ultimate school dance. So it seemed natural that Harford Tech senior Henry Mason would draw on his love of science when fashioning his promposal. Mason is a huge fan of chemistry in particular, says Loyce Bergin, who teaches chemistry at the high school. He wants to be a nuclear chemist someday.

Mason created a poster combining elements from the periodic table to invite his girlfriend, Hannah Jones, to the Pr-O-M (praseodymium, oxygen, “with me”). “He showed the science teachers first before he showed his girlfriend,” Bergin tells Newscripts.

And even though Jones wants to go into law enforcement, not chemistry, she said yes.

Bergin still has the promposal poster hanging in her room in hopes it will inspire others. “It is very rare we have kids that are interested in science and using it in a creative way,” she says.

Periodic Table
Constructing the periodic table from thread and yarn
Outreach
Sweet and savory science
Graduate Education
Celebrating eccentric chemistry graduation traditions
Share X
To send an e-mail to multiple recipients, separate e-mail addresses with a comma, semicolon, or both.
Title: Celebrating science by the slice and a chemistry promposal
Author: Andrea Widener
Chemical & Engineering News will not share your email address with any other person or company.