An efficient, modular device made of polymer electrodes soaks up carbon dioxide over a range of concentrations

In order to prevent the worst effects of global warming, the world needs to drastically cut carbon dioxide emissions by capturing them at their source, and even removing the gas from the atmosphere—where levels have surpassed 400 parts per million—according to the United Nations’ Intergovernmental Panel on Climate Change. Researchers hope a new carbon-capture technique that is energy efficient and low cost will help (Energy Environ. Sci., 2019, DOI: 10.1039/C9EE02412C).

The compact, battery-like system could remove carbon emissions from car tailpipes. What’s more, it works at low CO2 concentrations close to those in the atmosphere, and with further refinement should be able to directly capture the gas from air.

Large-scale carbon capture today relies on sorbent materials, most commonly water-based amine solutions, that soak up CO2. But separating the captured carbon dioxide and regenerating the amines requires a large amount of heat. The technique requires bulky equipment that is difficult to integrate into existing plants, and only works for high concentrations found in flue gases.

So researchers and some start-ups are experimenting with more efficient sorbent materials, carbon-capturing MOF materials, and other approaches that could bring down carbon-capture costs. But there is no technology that can scale up or down to work for different concentrations and volumes of CO2. “The problem with carbon-capture technologies at the moment is that there’s no panacea solution,” says Sahag Voskian, a postdoctoral researcher in chemical engineering at MIT.

When the battery is charging, electrons travel from the ferrocene to the quinone side through the external circuit, Voskian explains. In that reduced state, the quinone reacts with carbon dioxide, forming a carbonate salt and incorporating the gas into the solid electrode. Discharging the cell reverses the reaction, regenerating the quinone and releasing carbon dioxide, which can be flushed out using another stream of carrier gas, Voskian says.

This electrochemical process is completely reversible, unlike amine scrubbing, where part of the amine sorbent vaporizes and is lost when it is heated to release carbon dioxide. To operate, the cell toggles back and forth, with flue gas or air passed on it during charging, and the carrier gas blown in during discharge.

The scalability of this system makes it especially promising, says Paul Webley, a chemical engineer at the University of Melbourne. To change the size of the system from a small one that accommodates a sedan tailpipe to one that works for a large chemical plant, you would simply stack more modules together. Although the technology still needs long-term tests in the field, “this is a significant addition to our tool kit of technologies to reduce carbon dioxide emissions to the environment,” he says.

The researchers tested the device with gases that simulate the exhaust from various industrial processes containing a mix of carbon dioxide water vapor, oxygen, nitrogen, and other contaminants. The first version of the device could absorb carbon dioxide at concentrations ranging from 6000 to 100,000 ppm. Since publishing their initial work, the researchers have tried a new blend of polymers that works at 500 ppm, close to the amount found in ambient air.

After 7,000 cycles, the cell had lost 30% of its carbon dioxide–removing capacity because some of the polymers had migrated to the oppositely charged electrode. The MIT group is working to prevent this by physically stabilizing the polymers, says Voskian.

So far, the researchers have coated electrodes as large as 10 m2 and made prototype devices that are 1 m2. They will soon start manufacturing the devices on an industrial scale using a roll-to-roll process, and plan to commercialize the technology through a spin-off called Verdox.

Because the approach relies solely on electricity, it might couple well with renewables, says Jennifer L. Wilcox, a chemical engineer at Worcester Polytechnic Institute. For example, a system for capturing CO2 directly from the air could be powered by a solar cell. 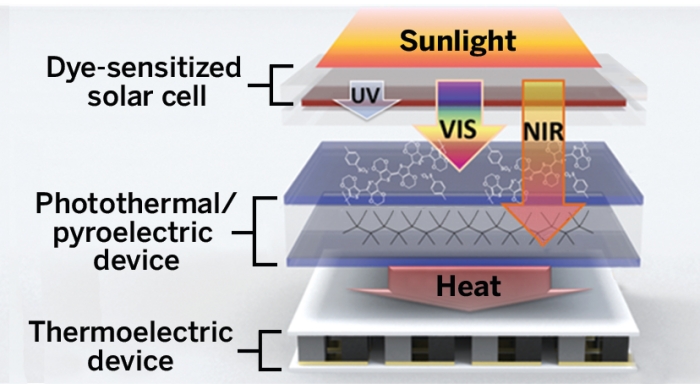 Materials
Hybrid Device Harnesses Light And Heat From The Sun

Share X
To send an e-mail to multiple recipients, separate e-mail addresses with a comma, semicolon, or both.
Title: Battery-like device could remove carbon dioxide from air
Author: Prachi Patel, special to C&EN
Chemical & Engineering News will not share your email address with any other person or company.