What’s baijiu, and where does its unique flavor come from?

Credit: Will Ludwig/C&EN
Baijiu is the world's most popular liquor in terms of volume consumed every year, yet few know about it outside of China.

When covering U.S. President Richard Nixon’s trip to China in 1972, American journalist Dan Rather referred to a popular liquor there, called baijiu, as “liquid razor blades.” Few outside of China have heard of baijiu (pronounced bye-joe), and clearly, not everyone’s a fan, but the potent beverage is the most-consumed spirit in the world, with people drinking more than 4 billion L per year.

Despite its fame (or infamy) among visitors to China, baijiu, typically enjoyed during special occasions or as a show of hospitality, has remained a mystery to most spirit lovers in the West. Still, there are those, like Jim Boyce, a Canadian blogger and consultant based in Beijing, who are determined to expand the liquor’s popularity across the globe. He dreamed up World Baijiu Day, celebrated on Aug. 9. Now in its fourth year, the festival features baijiu-inspired drinks and foods in 30 cities from New York to Melbourne.

More favorable reviews of baijiu by Westerners have called it funky, with a rotting, sweet fruit flavor and a touch of nuttiness. Some types have an aroma similar to soy sauce. The complex flavor arises from a production process that has been passed down from generation to generation over thousands of years.

Credit: Jiangnan University/Yan Xu
In a baijiu still, steam blasts through the fermented grain from below, carrying flavor compounds and alcohol off to condense in a cooling tower.

Baijiu is made by fermenting cooked sorghum, and occasionally other grains, along with a starter called jiuqu (“jiu” for alcohol and “qu” for koji, a fungus used to make soy sauce, miso, and sake). Jiuqu is a brick of crushed wheat, barley, and sometimes peas, and it is key to the process. It grows microorganisms such as yeast and fungi under certain temperature and humidity conditions. When these organisms come in contact with grains like sorghum, they secrete enzymes that break down macromolecules in the grains and produce baijiu’s complex flavor. And of course, the yeast produce ethanol.

To kick off fermentation, baijiu makers grind their chosen grains and soak them in hot water. As the grains expand, rupture, and gelatinize under high temperature, makers add crushed jiuqu into the mixture, which is then fermented in a pit or a pottery jar for one to three months.

During fermentation, microorganisms in the jiuqu get busy. Their enzymes convert starches into sugars, sugars into alcohol, and proteins into amino acids, while also producing flavor compounds such as ethyl hexanoate. Baijiu’s main raw material, sorghum, contains polyphenolic molecules called tannins, which are broken down into simpler aromatic compounds such as syringic acid.

For anyone who wants to try baijiu for the first time, it’s worth noting that the type of baijiu that smells like soy sauce (reputed to be an acquired taste) is the most expensive, exemplified by a brand called Moutai.

Related: What’s whisky and how do you best enjoy its hundreds of flavor compounds?

Moutai is considered the finest baijiu and the drink of choice for high-end meals in China. It can take more than five years to produce a bottle of this pricey spirit, which can cost more than $220 for 500 mL fresh out of the factory. And the price is often hiked by resale or increases in storage time. Yan Xu of Jiangnan University and Keliang Ji, former president of Kweichow Moutai Distillery, describe Moutai’s chemical composition in a chapter in the book “Alcoholic Beverages: Sensory Evaluation and Consumer Research” as containing 873 chemical components, including 380 esters, 85 acids, 155 alcohols, 96 ketones, 73 aldehydes, 36 nitrogenous compounds, and 48 other chemicals, although this complexity is not unique to Moutai.

Scientifically intervening in the fermentation process can help control the chemical composition of baijiu and thus its flavor. For example, researchers have found that some Bacillus bacteria strains used when making Moutai work better than others to turn glucose into tetramethylpyrazine. Pyrazines are some of the key compounds responsible for Moutai’s baked and nutty flavor.

For Wuliangye, another popular brand of baijiu that’s renowned for its fruity fragrance and lingering aftertaste, microorganisms living in the distiller’s unique mud fermentation pits play indispensable roles, and the mud pits become more and more valuable over the years as the organisms proliferate and form a stabilized ecosystem. Wuliangye’s facilities boast more than 30,000 pits, the oldest of which has been operating for over 600 years. When the company wants new pits to expand production, it needs to wait as long as five years for the right ecosystem to develop and stabilize. Knowing which organisms are present and how they are working together to produce the flavor could accelerate the pit prep process, says Dong Zhao, deputy chief technology officer of Wuliangye.

Related: What’s champagne and how do you preserve its precious fizz?

What’s unusual about baijiu is that both the fermentation and distillation are carried out on wet, but solid, cooked grain, not on a grain soup or a filtered grain extract like most liquors.

Once fermentation is complete, the distillation stage of making baijiu begins. First, baijiu workers take the fermented grains from the pits or jars and transfer them to a specialized still. Hot steam passes through the fermented grains, carrying with it extracted flavor and aroma compounds, as well as ethanol vapor, all of which are condensed in a cooling tower and collected. Workers then add fresh grain to the pits or jars to repeat the fermentation. Several rounds of fermentation and distillation produce batches of distilled liquor, which is rated for taste and quality, collected, and stored.

The final steps before bottling baijiu for sale are aging and blending. Aging times vary depending on the type of baijiu. Most places use sealed pottery jars to age and stabilize the distillates. In the case of Moutai, the liquor waits for a year before the batches are ready for blending. One bottle of Moutai usually comes from a blending of about 100 to 200 distilled batches, says Jiangnan University’s Xu. His team has been working with Moutai to monitor the chemical components in baijiu to improve blending and quality control. The blending results used to be judged entirely by human perception, but now the process is partially aided by computer, Xu says.

Related: What’s gluten-reduced beer, and can celiac patients drink it?

To reduce failure rate and waste, researchers are also working to identify and eliminate undesired microorganisms in jiuqu that produce “off” flavors, says Yang Zhu, a biochemical engineer at Wageningen University & Research, in the Netherlands. An added benefit of studying microorganisms in jiuqu is that the compounds they produce may have applications beyond making baijiu, Zhu says­—for example, lipid enzymes for oil production.

Wuliangye’s Zhao says efforts to introduce scientific innovation into China’s baijiu industry are not meant to change the heritage of the ancient process. They are about preserving the traditional process, he says, making improvements but maintaining its essence.

CLARIFICATION: This story was updated on Aug. 10, 2018, to clarify that jiuqu’s microorganisms, not undesired microbes in jiuqu, produce compounds that can have applications beyond baijiu production.

Credit: C&EN
Want to know what C&EN writers and editors thought of baijiu? Check out our live broadcast from Aug. 9 when we sampled the Chinese liquor for ourselves. Jump to about 10:09 to skip straight to the taste test.
Chemical & Engineering News
ISSN 0009-2347
Copyright © 2020 American Chemical Society 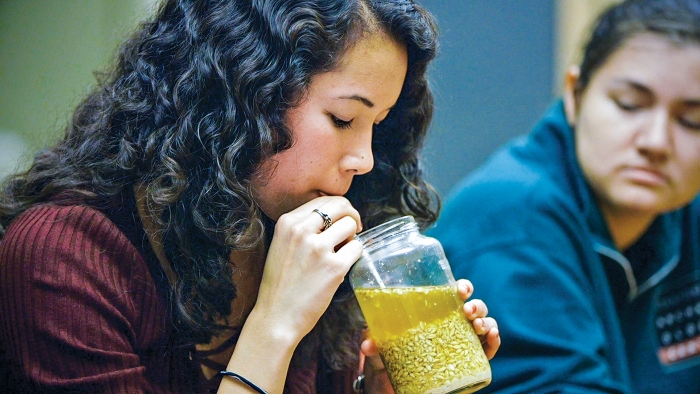 Analytical Chemistry
What’s whisky and how do you best enjoy its hundreds of flavor compounds?

Environment
Beer yeast adapted to life with humans
Share X
To send an e-mail to multiple recipients, separate e-mail addresses with a comma, semicolon, or both.
Title: What’s baijiu, and where does its unique flavor come from?
Author: Cici Zhang
Chemical & Engineering News will not share your email address with any other person or company.

Comments
JF Zhu (August 8, 2018 8:57 PM)
Moutai has an aroma like DDT. As matter of fact, some counterfeit Moutai is ethanol mixed with DDT. If you are not an expert and you are not sure the source of your Moutai, it is better not to drink it.
Reply »

Daryly (December 16, 2018 5:17 AM)
Hi, I have been experimenting with baijiu for the last three months or so. Its a bit too strong and pungent for my palatte. I have found it really is great as a cocktail mixer some brands more so than others. Baijiublog.com has a good in-depth selection on cocktail recipes here https://www.baijiublog.com/baijiu-cocktails/#Baijiu-Cocktails-1

In my opinion it mixes better with citurs flavours but everyone has their own preferred taste. Enjoy!
Reply »