Climate change will affect access to fresh water. How will we cope?

In late 2017, after years of declining dam levels and scarce rain, the city of Cape Town, South Africa, was in a severe water crisis. The government warned of Day Zero, when water levels would be so low it would have to cut off household access. In anticipation, it diverted water from agriculture and limited residents to 50 L of precious liquid per day. Residents did their part by recycling laundry water, taking fewer showers, and sanitizing instead of washing their hands. The campaign worked: by June 2018, the drought had eased enough for officials to call off the emergency. In the meantime, residents had become much more efficient with their water use, and the city had adopted effective water-saving strategies, such as reducing water pressure.

The specter of a Day Zero still looms for Cape Town and for many places around the planet. In part because of climate change, water scarcity could displace up to 700 million people by 2030, according to the United Nations. And around the world, people are most likely to feel the effects of climate change through its impact on water. As water availability in drier areas decreases, industrial, agricultural, and municipal interests will compete for water of increasingly low quality. Water purification can be costly, so chemists and engineers are working to make less-expensive, more energy-efficient technologies that will be more widely accessible. “Just getting access to water itself of any quality is becoming a challenge in dry regions,” says David Dzombak, head of Carnegie Mellon University’s Department of Civil and Environmental Engineering. Here are some solutions that will help slake the thirst of a drier planet.

Desalination plants are already common in coastal areas such as the Arabian Gulf and are becoming more attractive in places like inland Texas, where the groundwater is brackish. But the plants cost hundreds of millions of dollars to construct. The water they produce is expensive, varying widely depending on the price of energy, from $1.30 to $2.60 per 1,000 L.

As a small, island nation, Singapore has learned from its history of water insecurity and invested in desalination technologies that reduce its reliance on imported water. In 2018, it opened the $153 million Tuas Desalination Plant, the nation’s third of five planned plants. With the addition of this plant, which can clean enough water for 200,000 households, Singapore can meet 30% of the nation’s water needs via desalination. Global Water Intelligence awarded the state-of-the-art facility Desalination Plant of the Year in 2019. The Tuas plant pretreats seawater using dissolved air and semipermeable membranes to extend the lives of its reverse osmosis membranes. It uses about 3.5 kW h to produce 1,000 L of clean water, and the roof is partially covered in solar cells to offset a small portion of its energy needs. Much of the cost of desalination is energy, and Singapore residents currently pay a hefty $2.74 per 1,000 L for a mix of local, reclaimed, imported, and desalinated water. The Public Utilities Board, Singapore’s national water agency, is piloting a deionization process that could halve the process’s energy requirements. Still to be addressed is the production of toxic brine.

Desalination
The Tuas Desalination Plant uses a combination of dissolved air flotation, in which impurities are clumped together and pushed to the surface, and ultrafiltration via semipermeable membranes to treat the water before reverse osmosis. This pretreatment extends the life spans of the reverse osmosis membranes from weeks to months. 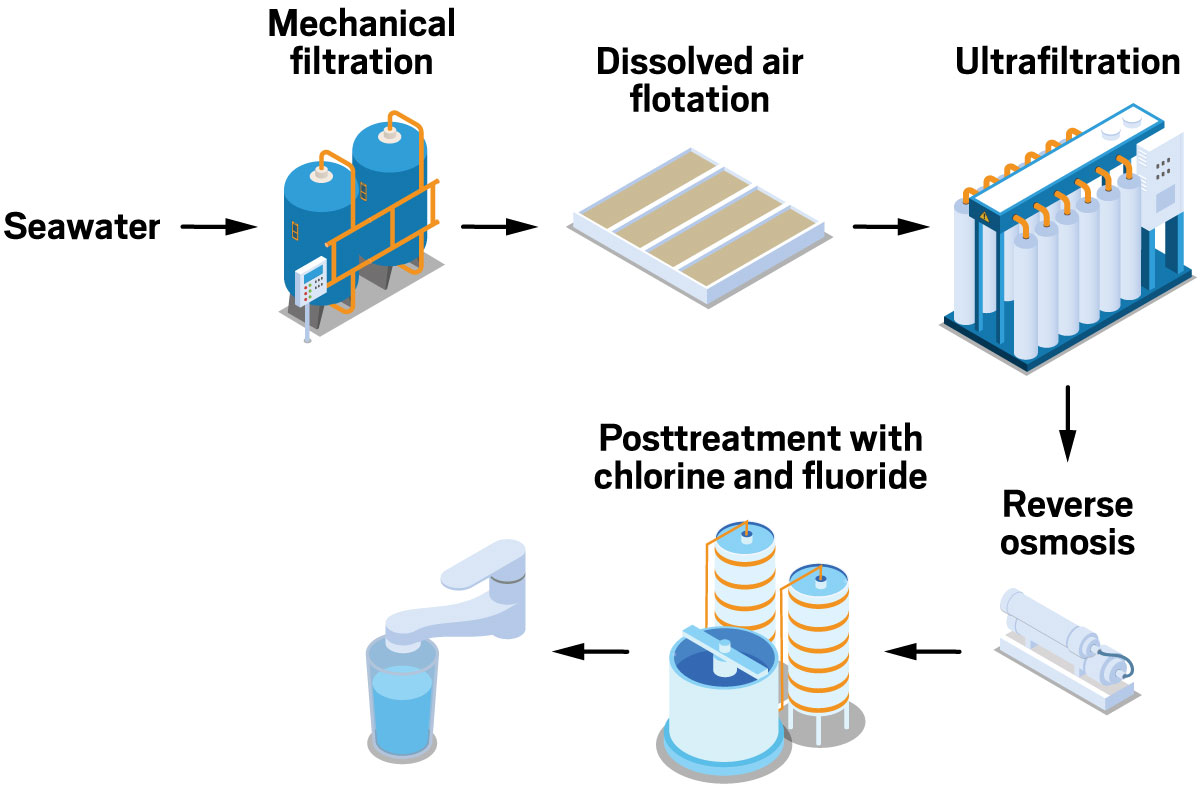 In resource-poor regions, the first priority is to remove infectious disease agents from the water supply. Locally made filters built from abundant materials can remove pathogens such as rotavirus from drinking water. For the technology to be effective, people should be able to assemble it locally at a low cost.

Filtration
A filter of sand or cotton mixed with an aqueous extract of dried, crushed Moringa seeds can remove viruses and bacteria from drinking water. The process is low cost and uses no electricity. 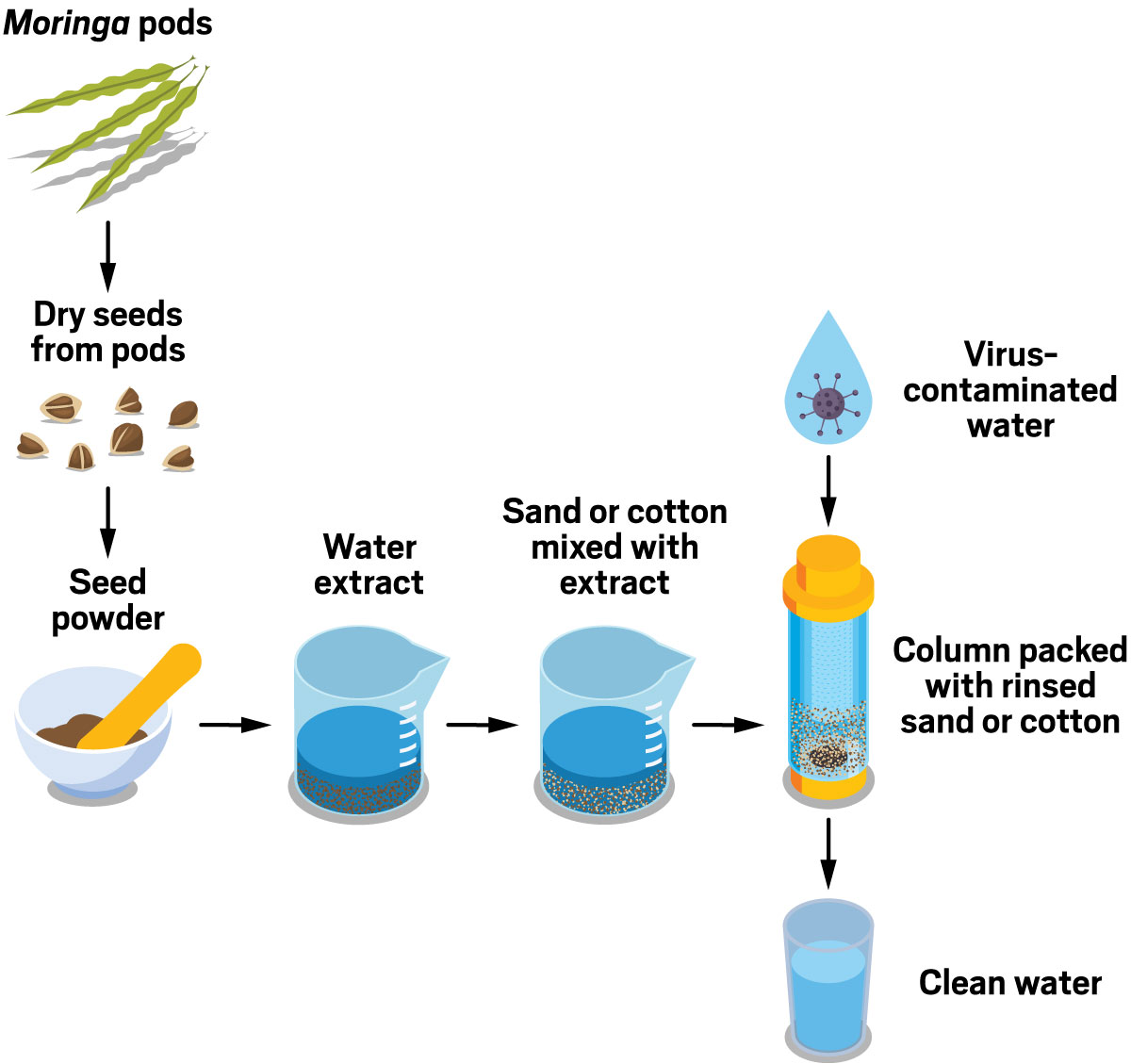 Manish Kumar of the University of Texas at Austin, Stephanie B. Velegol of the Pennsylvania State University, and colleagues have developed a prototype filter that relies on extracts from the seeds of Moringa plants, which are found in tropical and subtropical regions of South Asia (Environ. Sci. Technol. 2019, DOI: 10.1021/acs.est.9b03734). These areas are also hot spots for waterborne illness. A filter made by mixing sand or cotton with the extract strips bacteria and viruses from the water. The filter is intended for residential or community use. It costs less than $2 per person per year and requires no power: the filter relies on gravity to pull the water through. The team is currently working on fine-tuning the filter to prevent interference by organic matter.

In remote regions of Africa, the Middle East, and Australia, where sun is abundant but clean water and energy are at a premium, modular photovoltaic purification units can supply small communities with the precious resource. These systems use solar power to purify contaminated rain, brackish groundwater, or seawater.

SOLAR-POWERED PURIFICATION
In this hybrid photovoltaic–membrane distillation device, source water is cleaned as it evaporates through a membrane. Brackish water is discharged to keep the system clean. 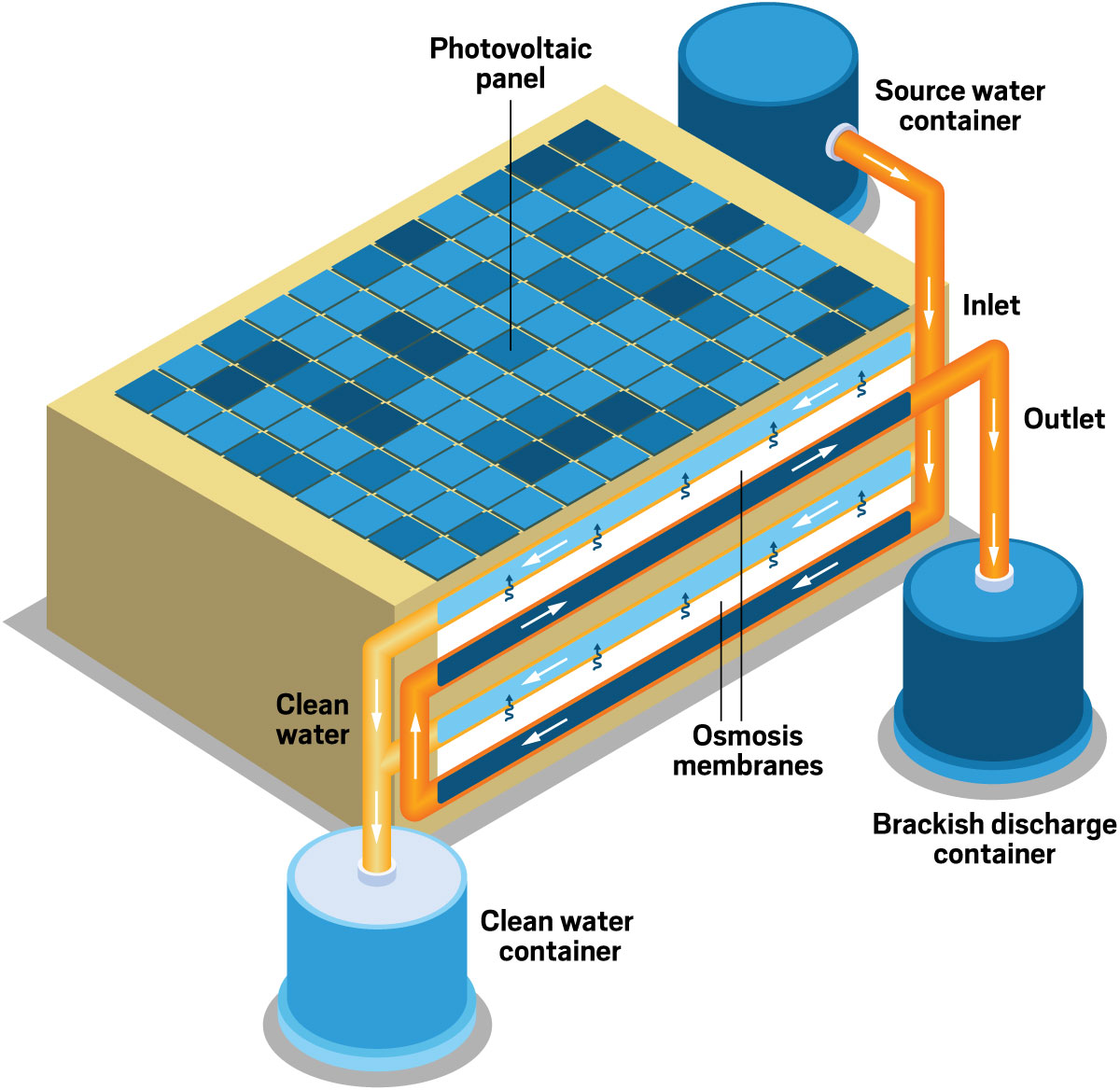 Efforts in this area abound. Pittsburgh-based Epiphany Water Solutions has designed purification units that use concentrated solar energy to distill contaminated water. Separately, a team from the Massachusetts Institute of Technology led by Steven Dubowsky has successfully implemented a solar-powered reverse osmosis unit to supply clean drinking water to the Mexican village of La Mancalona. Both units are designed to meet the needs of a few hundred people at a fraction of the cost of bottled water. Last summer, a team from King Abdullah University of Science and Technology reported a method for harnessing the waste heat typically generated by solar cells to distill drinking water (Nat. Commun. 2019, DOI: 10.1038/s41467-019-10817-6).

Perhaps the best way to increase water supplies is to reuse the water we have. With intensive treatment, wastewater can be returned to taps without first being released into the environment. The main obstacle for wider adoption of this method is not technology but public opinion—the process sometimes referred to as “toilet to tap.” In the US, so far a single plant has been built, in Big Spring, Texas. But the method is gaining traction in other states facing water scarcity, such as California.

El Paso Water successfully completed a wastewater treatment pilot program in 2016, and plans for a full facility are underway. The method is inexpensive compared with desalination and costs about as much as conventional treatment in water-rich areas. The utility estimates water from the plant will cost $1.06 per 1,000 L, after factoring in the cost of construction and operation over a 20-year period. 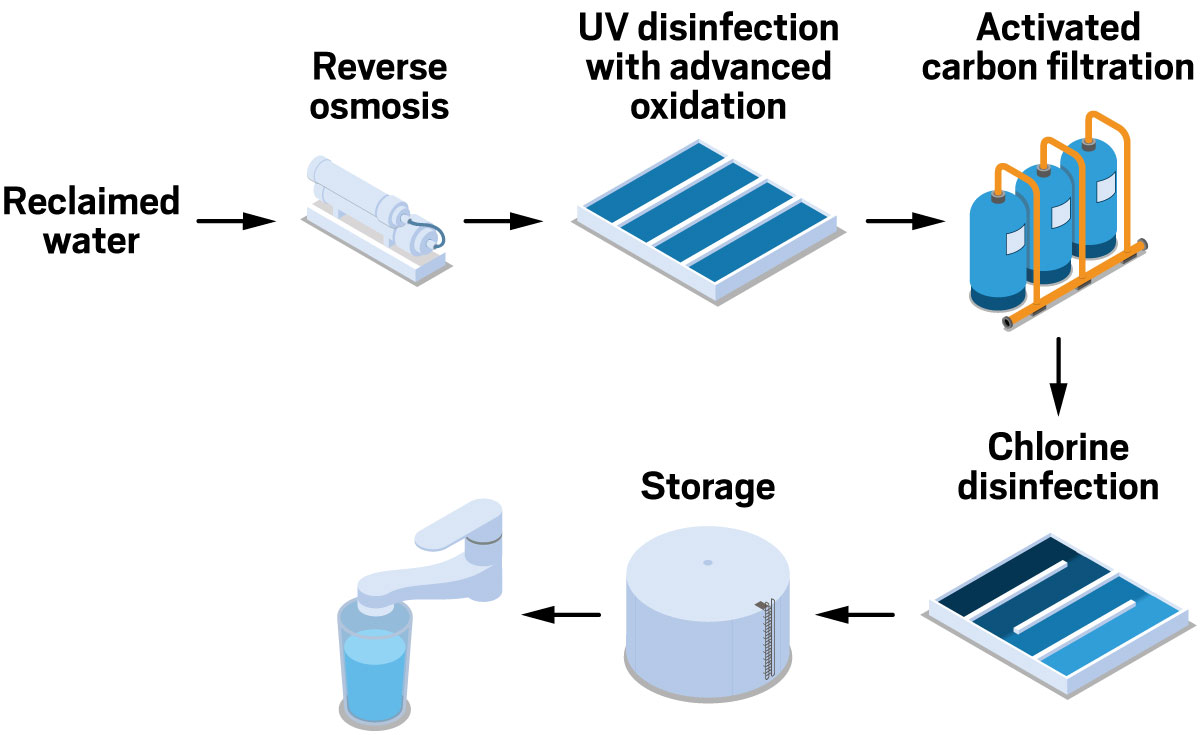 Water
Superefficient solar desalination
Water
Filter made with tropical tree seeds purges viruses from water
Water
A simple, scalable technique boosts the efficiency of solar desalination
Share X
To send an e-mail to multiple recipients, separate e-mail addresses with a comma, semicolon, or both.
Title: Climate change will affect access to fresh water. How will we cope?
Author: Alexandra A. Taylor
Chemical & Engineering News will not share your email address with any other person or company.