by Neil Savage,special to C&EN

Graphene has a reputation as a sort of wonder material. Consisting of a single layer of carbon atoms, graphene is far stronger than steel, highly electrically conductive, and transparent to light at wavelengths from the ultraviolet to the far infrared. Rodney S. Ruoff, director of the Institute for Basic Science (IBS) Center for Multidimensional Carbon Materials at Ulsan National Institute of Science and Technology (UNIST), has been interested in graphene since the early 1990s—even before researchers worked out how to isolate it from graphite by peeling off atomically thin layers in 2004. Ruoff is a leading expert on the nanostructure of carbon materials and pioneered methods for growing large-area graphene films (Science 2009, DOI: 10.1126/science.1171245). He has been listed as a possible contender for the Nobel Prize by Clarivate Analytics, which uses citation records to predict who might win; he has authored 31 papers that were cited more than 1,000 times and 8 others that were cited more than 5,000 times. Neil Savage spoke to Ruoff about his long history with graphene and his efforts to develop new kinds of carbon materials. 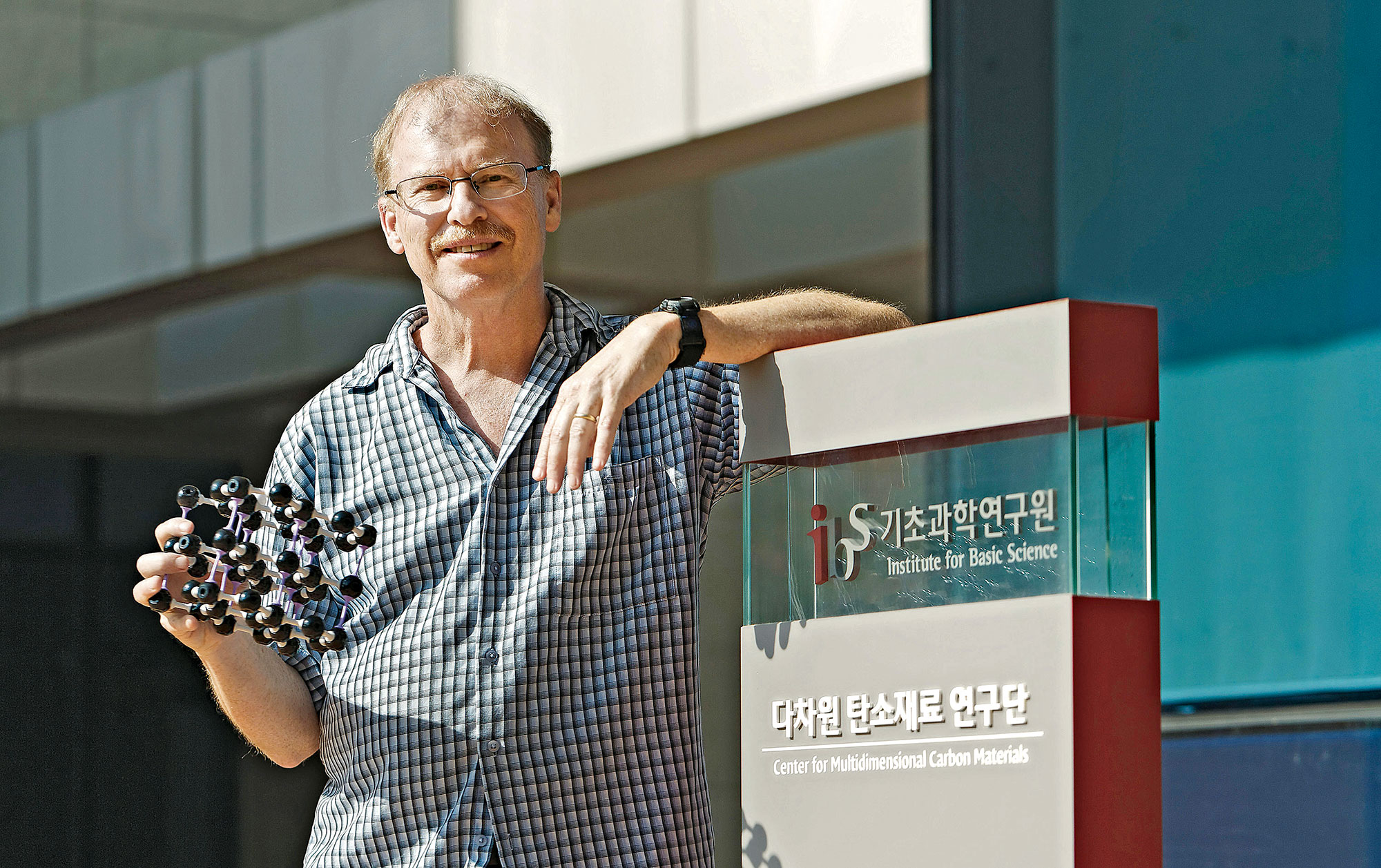 ▸ Recent reading:Cryptonomicon, by Neal Stephenson; Killing Commendatore, by Haruki Murakami. “I tend to like fiction more than nonfiction. I like to read a lot and just have a book that I can curl up with when I can.”

What was your initial interest in graphene?

I was already studying carbon nanotubes when I thought it through: graphite costs about a dollar per kilogram, and it’s just so much cheaper than nanotubes. So if we could get individual layers of graphite—that is, graphene—the impact would be enormous. I thought a material like that would be a wonderful filler in polymer composites. At the time, my focus was on the mechanics, and I thought that reaching very high strengths might be possible. I hadn’t really considered the fascinating electronic properties.

How did you try to isolate graphene from graphite?

My concept was to make pillars of graphite through lithographic patterning to get single-crystal pillars of carbon with no grain boundaries. We started with a piece of highly oriented pyrolytic graphite—a synthetic graphite—and we spin coated a thick layer of photoresist onto it. We did the photopatterning by etching the graphite with oxygen plasma. The process led to these square pillars that could be at different heights depending on the amount of oxygen plasma etching that we did. We then collaborated with Michael Lerner of Oregon State University on separating the carbon layers. He had been making graphite intercalation compounds for batteries that get in between the individual layers of carbon and really spread the layers out. But that didn’t work. So, we exfoliated the pillars by rubbing a silicon wafer over them, which generated very thin multilayer graphene platelets, and published several articles about that in 1999 (Nanotechnology 1999, DOI: 10.1088/0957-4484/10/3/308).

That sounds kind of complicated. How did you react when you heard that Andre Geim and Kostya Novoselov had isolated graphene by pressing a piece of Scotch tape to a chunk of graphite?

Well, it’s funny. I got an email from my former PhD student Min-Feng Yu, who is now at Georgia Tech. He said, “Hey, Rod, these guys are taking your Nobel Prize.” I had gotten into nanotube mechanics by that point, and the finding did cause me to get off that horse, which we were riding pretty hard. Already, before the paper appeared, I had sat down with colleagues at Northwestern and said we should revisit trying to come up with some method to exfoliate graphite.

What is your focus these days?

We want to pioneer new forms of carbon. Some kinds of porous carbons could have fascinating physical properties. So-called negative curvature carbons, also called schwarzites, have a saddle-shaped surface. Schwarzites have carbon atoms that are trivalently bonded. These surfaces show up in living organisms, such as in butterflies’ wings and beetles’ exoskeletons, and people who study interesting liquid mixtures and molecular assemblies have seen evidence of those sorts of structures. It would be fascinating to be able to make these controllably, maybe by bottom-up synthesis. They have very interesting three-dimensional periodic channels that run through them, and they probably would have very good electrical conductivity and interesting optical properties.

I would love to see us achieve diamond in new forms, like fibers, to achieve large-area, high-strength mechanical properties. If we could succeed in making a diamond fiber, which has never been done before, I think that people in industry would be exceptionally interested.

We published a paper recently on a method to make macroscale measurements of graphene (Adv. Mater. 2018, DOI: 10.1002/adma.201800888). Bin Wang, a postdoc who moved on to the University of New South Wales, did a wonderful job figuring out how to laminate a thin polycarbonate film to graphene so that the mechanics can be extracted from that composite. Now we have a reliable measurement method that anyone in the world can use. We can start focusing intensely on the graphene to try and find the critical flaws. Then we can try to get graphene that doesn’t have those flaws.

How did you decide to move from the University of Texas at Austin to South Korea in 2013?

I came to UNIST to attend a conference on graphene about 7 years ago, and they said, “We want to hire you away.” They said, “You could pursue one of these IBS centers; then you’d have long-term funding,” and it became much more interesting. The Institute for Basic Science manages 28 centers in physics, math, chemistry, biology, medical science, and the most recent one is in climate physics. The goal is to eventually establish about 50 of these centers. It’s all fundamental science.

Neil Savage is a freelance writer. A version of this story appeared in ACS Central Science: cenm.ag/ruoff. This interview was edited for length and clarity.

Share X
To send an e-mail to multiple recipients, separate e-mail addresses with a comma, semicolon, or both.
Title: Carbon chemist Rodney Ruoff looks toward making new materials out of carbon
Author: Neil Savage,special to C&EN
Chemical & Engineering News will not share your email address with any other person or company.