Last week, NASA scientists reported that the Curiosity rover had detected methane levels higher than any previously seen on Mars’s surface. The signal returned to background levels within days. Various missions dating back to 2003 have reported methane on Mars, typically less than 1 ppb at the planet’s surface, with seasonal variations (Science 2018, DOI: 10.1126/science.aaq0131). The 21 ppb detected this month is about three times as high as a previous spike the rover observed starting in late 2013 (Science 2015, DOI: 10.1126/science.1261713). On Earth, methane is often produced by microbes or by geochemical processes that happen when water interacts with certain minerals at high pressure. NASA scientists say Curiosity does not have the instruments to determine the origin of the gas, and they are waiting for two European Mars orbiters to corroborate the spike. Fred Goesmann of the Max Planck Institute for Solar System Research thinks the recent measurements are probably accurate and says the methane emission is a mystery. “If we see such a high concentration and it’s gone the next day, then it’s a really interesting story. Where does it come from and how?” He doesn’t think this recent spike is related to seasonal effects, and he points out that biological processes would produce constant emissions, not bursts. He’d like to see continuous surface measurements to find how quickly the gas comes and goes, but current rovers can’t do this. 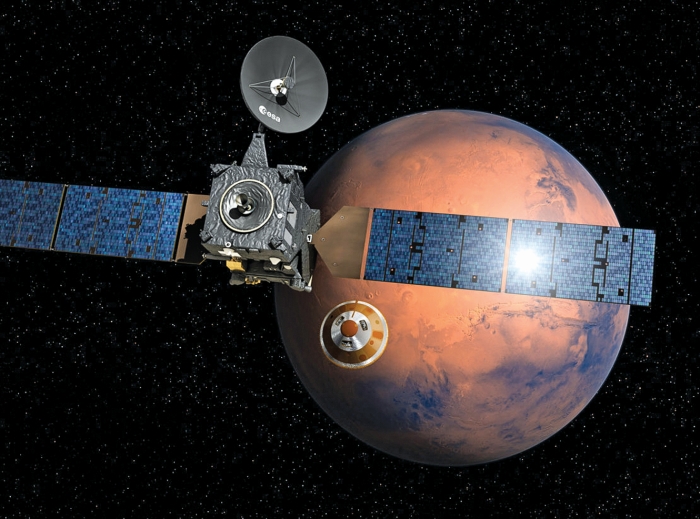 Physical Chemistry
ExoMars orbiter ready to map trace gases
Share X
To send an e-mail to multiple recipients, separate e-mail addresses with a comma, semicolon, or both.
Title: Methane burst detected on Mars
Author: Sam Lemonick
Chemical & Engineering News will not share your email address with any other person or company.