Bayer last week wasbusy dealing with R&amp;D, acquisition closings, andlegal issues. The company committed to a 2004 R&amp;D budget of $2.9 billion,85% of which will be earmarked for life sciences. The commitment came duringthe company's Bayer Innovation Forum, at which 16 company research scientistswere recognized for achievements ranging from a nanocrystalline iron oxidethat can adsorb arsenic from drinking water to development of keto-enolsfor new insecticides. Separately, Bayer agreed with French drugmaker Aventison a final price for Aventis' CropScience business. Under the new agreement,Bayer will receive a refund of close to $410 million, out of the $9.1 billionoriginally negotiated in 2002, following a revaluation of the assets anddebts in the deal. And on the legal front, Bayer has settled with its insurancecompanies regarding coverage for litigation involving its Lipobay/Baycolanticholesterol drug. Bayer has spent about $842 million to settle 2,224cases as of March 5; another 9,948 cases are pending in the U.S. The companyexpects insurance to cover about $1.2 billion of the claims.

Albany MolecularResearch Inc. and Aventis have filed patent infringement lawsuits againstfive companies that are seeking approval to market generic versions ofAventis' Allegra (fexofenadine HCl) allergy drug. Aventis previously filedsuit against the five firms. However, the filing of the new suits, whichassert infringement of two AMRI patents, means that a trial date previouslyset for September is no longer in effect. AMRI's patents claim fexofenadineintermediates and the process for making the drug. AMRI licensed them toAventis in 1995 in a lucrative deal that brought it $52 million last year.

DuPont has added toits solid-surface business by acquiring Guangzhou Montelli Material Technology,a solid-surfacing business with facilities in the cities of Guangzhou andXishui in southeast China. The acquired firm has 400 employees. The dealincludes the various solid-surface brands marketed by Guangzhou Montelliand its distribution network throughout China. DuPont says it will continueto manufacture Corian, its original solid-surface product, in Buffalo;at a joint-venture site in Toyama, Japan; and in Ulsan, South Korea.

GeneralElectric says it has made a breakthrough with a 24- 24-inch white organiclight-emitting diode lighting prototype. The panel gives off 1,200 lumensof light at an efficiency of 15 lumens per W, comparable, the company says,to an ordinary incandescent bulb. The project is cosponsored by the Departmentof Energy's building technologies program and the NationalEnergy Technology Laboratory. Over the past three years, GE has increasedlight output of OLED prototypes by a factor of 600. The company's goalis to create lighting devices that can be applied to surfaces like wallpaper.But first, GE says, it needs to increase efficiency to 100 lumens per Wand develop a low-cost manufacturing process.

Rhodia has signed afinal agreement to sell its food ingredients unit to Danisco.Rhodia CEO Jean-Pierre Clamadieu says the selling price, about $390 million,is higher than the company had targeted and will generate almost half themoney it expects to gain from divestments this year. He said at a pressconference last week that the firm has narrowed the list of potential buyersfor its specialty phosphates business to seven from 14. He also said thefirm's planned stock issue will raise more than the $360 million targetedearlier.

Shin-Etsu Handotai isboosting capacity for 12-inch silicon wafers by 50%. The Shin-Etsu Chemicalsubsidiary was the first company to produce the larger wafers, at its Shirakawaplant in 2001. The firm has since quadrupled capacity to 200,000 wafersper month and today commands about half the global market. Shin-Etsu isnow spending $360 million to further increase capacity to 300,000 wafersby the end of this year.

SaudiBasic Industries Corp. has unveiled the design of its nearly 118,500-sq-ftEuropean headquarters in Sittard, the Netherlands. To be built on whatis currently a rainwater catchment basin, the 11-story building will initiallyhouse about 450 people. The ground floor of the striking glass structurewill be mostly public space, with reception facilities for visitors andexhibitions.

A U.S. district court jury has awarded ArchChemicals $7 million in damages in a dispute with Ivar Malmstrom, formerco-owner of personal care ingredients maker Brooks Industries, which Archacquired in 2000. The jury determined that Malmstrom breached a noncompeteagreement by setting up a competitor, Active Concepts, after he sold Brooksto Arch. The jury also determined that he and his wife stole trade informationfrom an Arch database. In a separate case now pending in a New Jersey statecourt, Arch is seeking a damage award from Active Concepts and severalof its employees based on claims that they stole Arch trade secrets.

Degussa is launchinganother of its "project houses," this one for the development of biotechnologicalproduction processes. The 30-employee group, to be headed by Stefan Buchholz,will develop novel microorganisms and fermentation processes. It will linkwith external partners such as universities and biotech companies and willdisseminate its findings across Degussa. Funding will be about $25 millionover the next three years. Buchholz earlier headed a project house focusedon biocatalysis.

Intrepid Mining, a privately held natural resources firm,has signed one deal and wrapped up another that will make it the largestU.S. potash producer. Intrepid signed an agreement to buy ReillyIndustries' brine and potash business on the Bonneville Flats in Utahin a deal set to close by March 31. Reilly bought the mining operationin 1988 in a diversification move but now wants to focus on its core chemicalsbusiness. Intrepid has also completed the purchase of the potash assetsof Mississippi Chemical--now undergoingbankruptcy reorganization--for $27 million. 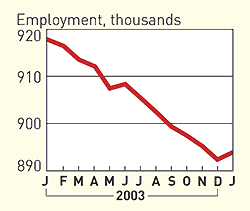 There was good news in chemical employmentdata for February. The industry added 1,300 employees, compared with January,bringing total employment to a seasonally adjusted 894,000--but this wasstill down 24,300 from the same month last year. The month-to-month increasewas more than accounted for by the hiring of 2,100 production workers,according to Labor Department data, for a total of 521,900. Year-to-year,the February production worker number was still down by 7,000.

The Saudi Arabian government has signedthree contracts for natural-gas exploration in the country's large southerndesert, part of a Saudi drive to develop its natural gas for fuel and petrochemicaluse. Some 41 companies expressed interest when the auction process openedlast July, but only six actually bid. Contracts were signed with Russia'sLukoil Oil Co., China Petroleum &amp;Chemical Corp., and a consortium of Italy's Eniand Spain's Repsol.Each partner has an 80% share in its respective project; SaudiAramco will hold the remainder. ChevronTexacoCorp., the only U.S. company to bid, placed second on all three projects.

A European consortium of private companies,research institutions, and the EuropeanCommission's Joint Research Centre has begun a $4.25 million test programfor construction materials and coatings that fight air pollution. The "smart"materials are being developed as part of the Picada (Photocatalytic InnovativeCoverings Applications for Depollution Assessment) project. Key to theprogram is titanium dioxide, which can oxidize polluting substances suchas nitrogen oxides and benzene. The EC is funding half the project cost.The other partners, including TiO2 supplier Millennium Chemicals,will split the rest.

Share X
To send an e-mail to multiple recipients, separate e-mail addresses with a comma, semicolon, or both.
Title: BUSINESS CONCENTRATES
Author:
Chemical & Engineering News will not share your email address with any other person or company.