Scientists in Barbados hope to apply a scientific approach to improving playing fields for cricket, the region’s favorite sport 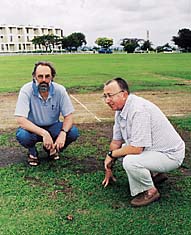 Credit: PHOTO BY AMANDA YARNELL
Chinnery (left) and Atherton hope to apply a scientific approach to optimizing the grassy surfaces of cricket fields.

Scientists in Barbados hope to apply a scientific approach to improving playing fields for cricket, the region&#146;s favorite sport

Cricketers’ obsession with the condition of the pitch—the 660 sq ft of manicured grass on which the game’s real action takes place—is arguably unparalleled in sports. Scientists at the University of the West Indies, Cave Hill, Barbados, hope that a mix of chemistry, physics, ecology, genetics, and microbiology can be used to optimize and maintain cricket fields in the region, where the sport is wildly popular.

Any day of cricket—and yes, the game often takes the entire day and can even span five days for big international matches—begins with the pregame “Pitch Report.” A TV sports anchor and self-proclaimed turf expert squats down and examines the humps and holes in the pitch. He then launches into a detailed prediction of how the ball will bounce on the grassy surface and whether cracks are likely to develop in the ground during the day’s play.

“There is a huge number of superstitions about what makes for a perfect pitch that have been handed down from generation to generation,” notes Jeffrey G. Atherton, a professor of biology at UWI Cave Hill. He and fellow professor Louis E. Chinnery have teamed up to form the university’s fledgling Sports Agronomy Research Unit (SARU). “We hope to apply a scientific approach to the subject,” he tells C&EN.

SARU is part of UWI Cave Hill’s recent initiative to improve sports in the region. “Sports have become more and more significant in terms of economic development,” Chinnery notes. Barbados and many of its island neighbors are now bidding to host matches during the next cricket World Cup, which will take place in 2007 in the West Indies. A perfect pitch is big business, he argues, pointing to the influx of millions of fans—and millions of dollars—that will accompany the World Cup.

The SARU members have experimental plots, laboratory space, and basic equipment at their disposal. But perhaps their greatest research asset is the recently completed world-class cricket ground that is the campus’s focal point.

As a first step, the pair plans to survey what grasses grow on the more than 100 cricket fields in Barbados, and compare their resistance to wear, elasticity, and interactions with the soil. The soils themselves are also of interest, Chinnery notes. “The chemical properties of soils here in the tropics are different than those in more temperate climates,” he says.

Eventually SARU will characterize and assess the usefulness of water-efficient grasses grown on the island, Atherton says. Grasses native to the Caribbean, which are routinely battered with hurricane rains, long and hot dry spells, and salty sea spray, may find use in other regions because of their hardiness, he notes. He and Chinnery hope to collaborate with other turf researchers, including those at the Sports Turf Research Institute in England.

But for now, Atherton and Chinnery are focused on probing the cricket pitches in Barbados prior to the highly anticipated World Cup matches.

MORE ON THIS STORY HOME FIELD ADVANTAGE In A Region Rich With Flora And Fauna, Natural Products Research Enjoys A Long Tradition TURF SCIENCE Scientists in Barbados hope to apply a scientific approach to improving playing fields for cricket, the region's favorite sport OUTSOURCING Foreign Pharma Firm's Caribbean Research Outposts Are A Boon To UWI WOMEN IN CHEMISTRY Among Those Studying Chemistry At UWI, Women Far Outnumber Men MORE THAN JUST SUN AND SAND Chemistry at the Caribbean's University of the West Indies is thriving despite funding struggles