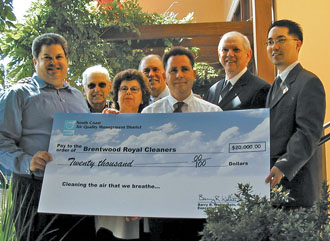 It was February and Blase Buononato, who co-owns Valleybrook Cleaners, a Wayne, N.J., dry cleaner that his father opened in 1971, had a decision to make.

For almost 35 years, Valleybrook had used perchloroethylene, the dry cleaning industry's benchmark solvent. However, it was time to install new cleaning equipment, and Buononato had to decide whether to buy another perc machine or switch to one of the many alternative systems that had started cropping up. I hemmed and hawed, but in the end, I stuck with perc, he says.

Buononato's decision would appear to be common in the mom-and-pop world of dry cleaning. Although numerous novel cleaning solvents have been launched in recent years, they have failed to significantly unseat perc. Marketers of alternative solvents contend that perc's days are numbered, but Buononato's choice shows that the old standby still has legs.

Dry cleaning is the use of a solvent other than water to lift dirt and stains off fabrics. Perchloroethylene has dominated the field in the U.S. since the late 1930s, when Dow Chemical and other manufacturers introduced it as a replacement for the odiferous and flammable hydrocarbon solvents that were then commonly used.

However, years of careless handling of spent perc and used filters have given rise to contaminated lots and a bad name for perc among many regulators and landowners. In addition, perc is considered a possible carcinogen by the Environmental Protection Agency, which runs a program to encourage the development of alternative solvents.

In response, enterprising chemical companies have stepped up with a host of alternative solvents, including liquid carbon dioxide, silicones, propylene glycol ethers, and improved hydrocarbons. These products are marketed as having perc's cleaning power without the environmental baggage that the chlorinated solvent is perceived as bringing.

As many as 30,000 dry cleaning establishments operate in the U.S. today, according to Mary Scalco, senior vice president of the International Fabricare Institute. She estimates that about 80% of these stores rely on perc.

Industry observers say most of the rest use hydrocarbons such as ExxonMobil Chemical's DF-2000 and Chevron Phillips Chemical's EcoSolv. About 500 stores use a silicone-based system sold by Green Earth Cleaning, and fewer than 75 use CO2-based systems like Washpoint, a CO2/detergent package marketed by Linde and Uniqema. Less common still are the relatively new propylene glycol ether systems marketed as Impress by Lyondell Chemical and Rynex by Rynex Holdings.

Janet Hickman, market manager for dry cleaning at Dow, acknowledges that perc faces competition. Its market share was probably 85% five years ago, she says, and as high as 90% 1015 years ago. But Hickman figures the encroachment by alternatives would be even greater were it not for significant steps taken by the dry cleaning industry and its solvent suppliers to boost recycling and reduce perc consumption.

From 220 million lb in 1990, the dry cleaning industry last year consumed only 37 million lb of perc. It's mostly because of better engineering practices and new equipment available to dry cleaners, Hickman says. Dow, for example, promotes the use of small-volume returnable containers and closed-loop delivery systems to reduce spills and fugitive vapors.

Despite these efforts, though, perc is under a regulatory cloud, with the sharpest scrutiny coming, not surprisingly, from California.

As of Jan. 1, 2003, according to a rule enacted three years ago by the Los Angeles-area South Coast Air Quality Management District (SCAQMD), new dry cleaning facilities cannot install perc systems, and existing facilities cannot install additional ones. The law also calls for a total ban on perc-based dry cleaning in the region by the end of 2020.

The California Air Resources Board (CARB) is now in the process of finishing a statewide review of perc in dry cleaning. Based on what I have heard from CARB staff, Hickman says, they are not looking at a phaseout of perc like in the South Coast district. Rather, she expects the state to require the latest dry cleaning equipment, such as the efficient machine that Buononato recently installed in his New Jersey store.

Still, marketers of alternatives see Southern California as a harbinger for the dry cleaning industry. Harry Motson, technical applications manager at Uniqema, points to Brentwood Royal Cleaners, a Los Angeles-area commercial dry cleaner that successfully made the switch to a CO2 system. After the firm installed the new equipment, Motson notes, SCAQMD presented it with a $20,000 grant check. Firms that switch to hydrocarbons can earn a $5,000 grant.

Motson describes adoption of CO2 systems as growing at a slow but steady pace of about one new installation per month in the U.S. In the three-year-old Washpoint venture, Uniqema, a unit of the British specialty chemical maker ICI, supplies a detergent booster specifically designed to work with liquid CO2. Linde markets the booster/solvent package and works with equipment makers to perfect CO2-based dry cleaning machines.

The pace of conversions should speed up in the years ahead, Motson predicts, as the dry cleaning industry replaces old equipment and becomes familiar with the benefits of CO2-based cleaning. Old habits seem to die hard, he says. Perc users have tried to keep up with the times with equipment improvements, but such changes don't solve what he calls perc's basic problem: mainly that this chemical can be toxic in the environment.

While CO2 dry cleaning has some big companies behind it, the silicone-based GreenEarth approach is backed by two of the corporate world's biggest names: General Electric and Procter & Gamble.

Dry cleaning executive Jim Barry and two associates started GreenEarth in 1998 after learning about a novel cleaning solvent, decamethylcyclopentasiloxane, or D5. GE Silicones formed a joint venture with the company in 1999, and P&G contributed detergent booster technology in 2001.

Today, according to GreenEarth President Timothy R. Maxwell, GE and P&G both have minority stakes in the firm. In addition to the 500 machines in the U.S., Maxwell says, another 500 D5-based machines are in use around the world, including 200 in the U.K.

GreenEarth literature describes D5 as nontoxic, nonirritating to skin, and nonregulated. It notes that the compound is already used in personal care products such as roll-on deodorants, shampoos, and body lotions. Unlike CO2 and hydrocarbons, however, D5 is not part of the SCAQMD grant program, pending review of some bioassay results.

As evidence of GreenEarth's momentum, Maxwell points to the Men's Wearhouse clothing chain, which uses D5 to clean rental tuxedos in a Houston dry cleaning plant that is called the world's largest. In 2003, the retailer launched a dry cleaning chain based on the silicone solvent. It operates about a dozen facilities in the Houston area today and has said it wants 1,000 locations within 10 years.

A dry cleaner himself, Maxwell says he understands the slow rate at which alternatives are being accepted. At the risk of beating up my industry, we tend not to be that sophisticated, he says. Rather than try something new, we tend to go along with what we know.

Frank Liotta, Lyondell's manager of new product commercialization, claims that dry cleaners are already using Impress and are happy with it. Among its selling points is that it is not considered a hazardous chemical or a hazardous air pollutant by EPA and it doesn't fall under the Safe Drinking Water Act. It is a volatile organic compound (VOC), but with a higher flash point—190F—than most hydrocarbon solvents.

Like Maxwell, Liotta accepts that market penetration will be slow. Since alternative solvents generally can't be used in perc machines, he notes, dry cleaners don't consider using them until they need to replace equipment. Because of this, the adoption of alternative solvents will take time, he says.

Hydrocarbons are so far perc's most formidable challenger, in part because they are descendants of the solvents used in the early days of dry cleaning. Indeed, in some parts of the U.S., dry cleaners continued to use hydrocarbons after 1940 and never adopted perc. 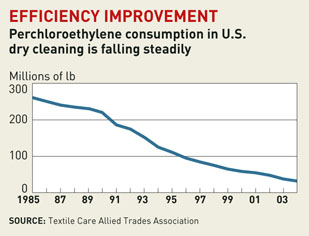 However, hydrocarbon marketers stress that what they sell today is nothing like the smelly and flammable Stoddard solvent of yesteryear. A typical modern hydrocarbon is Chevron Phillips' EcoSolv, a hydrogenated isoparaffin introduced in the U.S. in 2001. According to the company, EcoSolv has a flash point of 142 F, is highly biodegradable, and is virtually odorless.

Marketers of CO2 and silicone systems caution that the newer hydrocarbons are still VOCs and are subject to fire code and possibly other regulations. Nancy Eilerts, technical sales representative for Chevron Phillips, counters that hydrocarbons have a favorable overall environmental footprint because of their low-waste manufacturing process and low energy requirement.

Deciding on a solvent system is a formidable task for dry cleaners, typically small-business owners who must weigh complex factors such as equipment cost and longevity, solvent price and availability, future regulatory issues, and, last but not least, the ability of a given system to get clothes clean.

A report prepared by Jacobs Engineering last year for the City of Los Angeles' Environmental Affairs Department laid out many of the facts and figures about various solvents, although it didn't make recommendations. Among the report's findings is that CO2-based dry cleaning machines cost about twice as much as other machines, but that CO2's annualized cost of operation is comparable with other approaches.

Back in New Jersey, Buononato ticks off various objections to silicone, hydrocarbons, and PG ethers. He says he would have liked to convert to CO2 but was dissuaded by the price of the equipment. In the end, he claims to have no regrets about sticking with perc. If they came out with perc today, he says, it would be the chemical of the future.