Protein production, one molecule at a time

In Action
[+]Enlarge
Credit: © AAAS/Science
In this time-lapse movie, single fluorescent protein molecules are spontaneously generated in cells. They are clustered in gene-expression bursts. The images were collected every 3 minutes with 100-millisecond acquisition time followed by 1,100-millisecond photobleaching time. 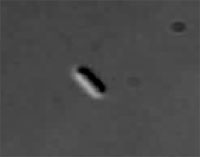 Credit: © AAAS/Science
In this time-lapse movie, single fluorescent protein molecules are spontaneously generated in cells. They are clustered in gene-expression bursts. The images were collected every 3 minutes with 100-millisecond acquisition time followed by 1,100-millisecond photobleaching time.

Two new techniques have been developed to follow the production of single protein molecules in living cells in real time. X. Sunney Xie of Harvard University says his lab's methods will allow scientists to investigate the expression of low-abundance proteins, information that can't be obtained with current genomic and proteomic techniques. In one study, Ji Yu, Jie Xiao, and Xie visualize the production of single molecules of a fluorescent, membrane-targeted fusion protein in cells of living bacteria (Science 2006, 311, 1600). In the other, Long Cai, Nir Friedman, and Xie demonstrate a microfluidic-based assay that uses β-galactosidase-a standard and highly sensitive cellular reporter of gene expression-to track protein production in living bacterial cells with single-molecule sensitivity (Nature 2006, 440, 358). Both approaches reveal that protein production occurs in bursts and that the number of molecules in each burst varies, Xie notes. The microfluidic assay also works with yeast and mammalian cells, and because it is easy to scale up, it may pave the way for whole-genome studies of the production of low-abundance proteins such as transcription factors, he adds.