Thriving Fenical
[+]Enlarge
Credit: Courtesy of William Fenical
and coworkers have coaxed several strains of deep-sea bacteria belonging to the tentatively designated genus Marinispora to grow in the lab. 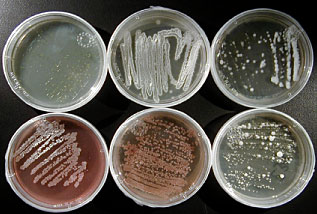 Credit: Courtesy of William Fenical
and coworkers have coaxed several strains of deep-sea bacteria belonging to the tentatively designated genus Marinispora to grow in the lab.

At the award symposium for the American Chemical Society's Ernest Guenther Award in the Chemistry of Natural Products, the 2006 winner, William Fenical, sounded as excited and fascinated as ever, decades after he embarked on his career-long study of natural products from the sea. Fenical, of the University of California, San Diego, and Scripps Institution of Oceanography, received his award late last month at the ACS national meeting in Atlanta. His latest findings continue to confirm the chemical richness of the oceans. And the tradition he began of investigating microbial chemical ecology is alive and well and spreading through the independent work of his former students.

Fenical is convinced that the ocean depths are a rich source of new compounds with therapeutic potential. In the late 1990s, he said, he began concentrating on bacteria growing on the seafloor. Initially sampling at depths of about 100 feet, he has progressively extended his reach to depths of thousands of feet. One of the most surprising discoveries from these deep-sea explorations is the discovery of actinomycetes that have never been seen before. Actinomycetes are a group of bacteria that have been a rich source of antibiotics and other drugs for human health. They are abundant in the soil but were not thought to exist in the marine environment.

The deep-sea bacteria resemble some other bacteria except that they require salt to survive and grow, Fenical said. Some of the bacteria have already been assigned to a new genus: Salinispora. To date, he pointed out, 80% of the strains his group has collected inhibit cancer cell growth at submicromolar concentrations and 35% exhibit antibiotic activity against drug-resistant bacteria.

In 2003, Fenical's group described salinosporamide A, the first natural product from the new genus (C&EN, Jan. 20, 2003, page 37). Isolated from S. tropica, the compound is selectively and potently toxic to certain cancers, including colon and breast cancers. Fenical said an Investigational New Drug Application has been filed, and the compound is scheduled to begin human clinical trials in May.

Since 2003, many other compounds have been isolated and characterized, including sporolides A and B from fermentation broths of S. tropica, cyanosporosides A and B from a species tentatively designated S. pacifica, and 26-ring macrolides from S. arenicola. The genome of S. tropica, which has now been fully sequenced, indicates that the organism can biosynthesize 15 natural products, and only two of those have been seen so far, Fenical pointed out. The genome also suggests that the compounds likely are derived from enediyne polyketide biosynthetic pathways, he said.

TRIAL BOUND
[+]Enlarge
Only three years after it was first reported, salinosporamide A is slated for clinical trials.

Only three years after it was first reported, salinosporamide A is slated for clinical trials.

More recently, Fenical and coworkers have succeeded in cultivating bacteria that belong to a brand-new actinomycete genus tentatively designated Marinispora. Like Salinispora, the new genus is proving to be chemically rich. For example, Fenical and coworkers have found unusual macrolides that they have named the marinomycins. These consist of dimeric 2-hydroxy-6-alkenylbenzoic acid lactones with conjugated tetraenepentahydroxy polyketide chains. Four that have been characterized, marinomycins A—D, are potent against drug-resistant bacterial pathogens and certain melanomas (J. Am. Chem. Soc. 2006, 128, 1622).

Fenical's recent harvests from the deep sea are more than enough for another career. His team is cultivating and examining 15 unidentified marine actinomycetes, each of which, he said, is likely to be a new genus. Given the chemical diversity already encountered in Salinispora and Marinispora, these other potential genera likely will yield even more chemical novelty. "We have sampled only a very small part," Fenical noted, and of the compounds so far identified from that sample, only a few have been encountered before. "We have to sample broadly to better access the amazingly diverse populations of chemically rich bacteria in ocean sediments," he emphasized.

These results are only the most recent payoffs of what symposium chair Tadeusz F. Molinski, chemistry and biochemistry professor at UC San Diego, described as Fenical's "phenomenal record of research risk-taking." In turn, Fenical credited the National Cancer Institute for taking "a big risk in funding this research 10 years ago. We didn't know then what we would find or where this would go. It is now paying off."

In his introduction of Fenical during the symposium, Molinski described the evolution of Fenical's research from classical organic chemistry—his first publication was about cycloaddition chemistry—to an integrated program of chemical ecology, systematics (the study and classification of organisms), and drug discovery. Molinski noted that a 1983 Science paper about chemical defense adaptations of certain reef-building algae signaled Fenical's transition from the usual natural products research of isolation, identification, and characterization of compounds to the less widely tackled field of chemical ecology.

Fenical's passion for understanding the chemical ecology of marine microorganisms has rubbed off on his former graduate student David C. Rowley, an assistant professor of biomedical and pharmaceutical sciences at the University of Rhode Island. For natural products chemists, Rowley said, a big thrill is discovery—being the first to see what a molecule never seen before looks like—and a great endeavor is finding out if it might benefit people. Equally important, he said, is discovering what the molecule does for the microorganism that makes it.

Studies to do the latter are not so easy, Rowley said. At the symposium, which was organized by the Division of Organic Chemistry, he pointed out that studying microbe-microbe interactions has practical difficulties. For example, visually distinguishing species of microbes from each other is not as straightforward as it is with macroscopic organisms, and replicating the complex habitats of the microorganisms in the lab is challenging.

Undaunted, Rowley has devoted a significant part of his research to marine microbial chemical ecology. One area of investigation is antagonistic interactions when bacteria compete in colonizing marine particles. For this work, his group has examined the interactions of Vibrio cholerae, the organism that causes cholera. According to Rowley, the ecology of this marine species is intimately coupled to its attachment to particulate matter. Furthermore, he said, "patterns of cholera outbreak correlate with sea surface temperature increases, and climate warming may influence the future geographic distribution and frequency of cholera outbreaks."

The temperature dependence of cholera outbreaks may be due to the effects of temperature on other marine organisms that inhibit the growth of V. cholerae, such as the marine bacteria designated SWAT3. Rowley and coworkers have shown that SWAT3 inhibits V. cholerae and that it does so better at 24 °C than at 30 °C. They have established that the effect is due to andrimid, a potent inhibitor of V. cholerae. V. cholerae's sensitivity to andrimid, however, is unaffected by temperature. Rather, Rowley and coworkers have found that SWAT3 produces more andrimid at 24 oC than at 30 °C (Appl. Environ. Microbiol. 2005, 71, 8531). V. cholerae would be more successful as ocean temperatures warm, Rowley told C&EN.

Another of Rowley's interests is marine inhibitors of bacterial communication known as quorum sensing. In quorum sensing, bacteria use certain small molecules to indicate their population and to switch on genes for certain phenotypes when they sense a threshold population, or quorum. Phenotypes that depend on quorum sensing include biofilm formation, antibiotic production, swarming, and bioluminescence.

Rowley's group has been investigating whether small molecules produced by gram-positive bacteria might disrupt quorum sensing among gram-negative bacteria. They use Vibrio harveyi as a rapid screening tool. The gram-negative organism has a well-studied quorum-sensing system that translates bacterial populations to bioluminescence. So far, they have found a gram-positive Halobacillus species that inhibits, but does not kill, V. harveyi, through simple molecules such as phenethyl amides.

"We haven't fully investigated the phenomenon, but we're encouraged," Rowley told C&EN. Quorum-sensing antagonists not only will help explain how microorganisms compete but also may yield new molecules for therapeutic use, he added, noting that the virulence of certain bacterial pathogens depends on quorum sensing. "If we know how bacteria interact and what molecules do in nature, we'll know better how to use those molecules for human benefit."