So ordinary yet so versatile, eggs are a complex scramble of chemical compounds 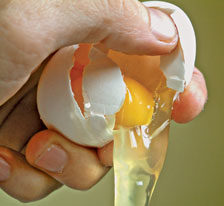 Alfred Hitchcock, known for his terrifying movies, had one unusual fear: "I'm frightened of eggs," he once said. "Worse than frightened—they revolt me. That white round thing without any holes—have you ever seen anything more revolting than an egg yolk breaking and spilling its yellow liquid?"

Okay, so maybe they are a little icky. But they're so versatile: They can be scrambled, boiled, fried, or poached. Add a few ingredients, and eggs can be transformed into soufflés, quiches, meringues, or custards. The versatility of eggs is a reflection of their intricate chemical makeup. They contain a laundry list of chemical components, including proteins, fats, vitamins, minerals, and water.

Hitchcock was wrong about one thing: Eggs do have holes. A single eggshell is perforated by 9,000 pores, on average. The shell forms the egg's container, protecting it and acting as a permeable membrane for air and moisture to pass through.

About 95% of the eggshell is calcium carbonate, and the remaining 5% is a mix of other minerals, such as calcium phosphate and magnesium carbonate, as well as soluble and insoluble proteins. These components strongly influence the strength of the shell. A hen on a diet low in calcium or vitamin D, for example, lays eggs having thin, soft shells, or no shells at all, according to the American Egg Board (AEB), a group representing the egg industry.

Commercial eggs in the U.S. are generally white or brown, but chickens lay eggs of other colors, from pink to green to blue. The colors of eggs come from pigments that are secreted by the hen and deposited on the eggshell's outer layers during formation in the chicken's oviduct, the canal that eggs travel through from the ovaries to the outside world. Egg color is a genetic trait, so colors vary from breed to breed. Brown eggshells contain the pigment protoporphyrin, a breakdown product of hemoglobin. Found only on the shell's surface, the brown pigment can be dissolved by vinegar or rubbed off with sandpaper. Blue and green hues are caused by the pigment oocyanin, a by-product of bile formation. White eggshells are devoid of these pigments.

Surrounded by the eggshell, the slimy, clear fluid of the egg is the albumen, or egg white—the egg's cytoplasm. It consists of 90% water, seven major proteins, and no fat, according to the Department of Agriculture's National Nutrient Database. Textbook descriptions of albumen note that ovalbumin is the main protein, making up 54% of the white.

In a fresh egg, the albumen contains carbon dioxide, which diffuses out of the egg as it ages. With the loss of CO2, the egg white becomes more alkaline and thins. Because of CO2 loss, an egg a few weeks old will be easier to peel after boiling than a fresh egg with a higher CO2 concentration, although the cause of this phenomenon isn't completely understood.

The main source of Hitchcock's revulsion is the yolk, which, if fertilized, becomes a chicken embryo. Yolks, which make up one-third of the egg's weight, are the near-opposite of albumen; they contain all the egg's fat and cholesterol, half of its protein, and four times the calories of the white. A yolk's golden yellow color is due to the diet of the hen. A diet rich in the yellow and orange plant pigments called xanthophylls leads to a yellow yolk. If the hen's diet is low in these pigments, the yolk can be almost colorless.

Yolks contain all of the vitamin content in the egg, including six B vitamins, as well as vitamins A, D, and E. The yolk also contains the antioxidants lutein and zeaxanthin and trace amounts of β-carotene, phosphorus, iron, magnesium, and other metals.

The freshness of an egg can be determined from the appearance of its yolk. A fresh egg has a round, firm yolk and a tight surrounding membrane, called the vitelline membrane. As the egg ages, the yolk absorbs water from the albumen, which distends the membrane and results in a looser, flattened yolk.

The greenish gray ring that can form around the yolk of a boiled egg comes from overcooking. The iron and sulfur in the yolk form ferrous sulfides, creating the green ring at the yolk's surface. AEB assures consumers that, although the color is unappealing, the ring does not affect an egg's flavor and nutritional content.

Hitchcock's aversion to eggs may have been influenced by the well-known "rotten egg smell," usually associated with an egg's sulfur content (about 50 mg in the white and about 25 mg in the yolk). Contributing to an egg's normal odor are a number of volatile constituents, including hydrocarbons, phenols, indans, indoles, pyrroles, pyrazines, and sulfides, including hydrogen sulfide. Dimethyl sulfide and dimethyl trisulfide in small amounts contribute to the characteristic odor and flavor of eggs, even fresh ones, according to AEB.

A truly rotten egg is formed when bacteria penetrate the shell and produce foul-smelling hydrogen sulfide.

The complexity of eggs puts them in the spotlight of health debates. Although eggs are high in protein and vitamins and low in fat and sugar, they're heavy on cholesterol, which could raise a person's risk of heart disease. An egg can contain up to 250 mg of cholesterol, which is 83% of the U.S. recommended daily allowance of 300 mg.

The British Nutrition Foundation defends eggs' health value, stating in a 2006 report that there is no relationship between eating eggs and increased cardiovascular risk. AEB also concludes that eating eggs doesn't increase the risk of heart disease.

So don't give in to ovophobia. Crack open an egg, cook it, and enjoy.

Comments
vikki samuels (June 21, 2013 12:25 PM)
If you crack open a fresh egg and you can smell it from 2 feet away what does this mean, remembering the egg is not old or rotten.
Reply »