[+]Enlarge
Credit: DONNA COVENEY/MIT
Graduate student Chris Loose (left) and Stephanopoulos look for signs of bacteria in a plate they are holding. 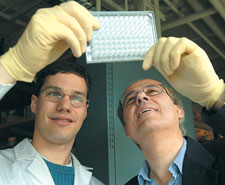 Credit: DONNA COVENEY/MIT
Graduate student Chris Loose (left) and Stephanopoulos look for signs of bacteria in a plate they are holding.

Using rules derived from a "linguistic" analysis of antimicrobial peptide sequences, researchers have created peptides that inhibit Bacillus anthracis, the cause of anthrax, and Staphylococcus, the culprit in many antibiotic-resistant hospital infections (Nature, DOI: 10.1038/nature05233).

A manifold of organisms, from insects to humans, have an inherent defense against invading pathogens called innate immunity. This protection is in addition to acquired immunity, a process in which antibodies are produced in response to pathogens the organism has battled.

The innate immune response includes an increase in the production of highly cationic antimicrobial peptides that are 12 to 50 amino acids long. Bacteria have limited ability to develop resistance to these peptides, and as such, the peptides are attractive templates for new antibiotics.

When Gregory Stephanopoulos' group in the department of chemical engineering at MIT and colleagues at IBM Research set out to develop rational rules from the more than 500 known antimicrobial peptides to help in the design of potent new ones, they used what Stephanopoulos calls a linguistic approach.

The team first identified "words"—common amino acid groupings—and then grammatical rules describing the common ways in which the amino acid words are organized. The researchers identified more than 600 rules and used the rules to design and test new peptides, including ones with activity against anthrax and staph.

"What is so novel about the MIT study is that the tools of modern linguistic analysis could be used to identify functional patterns of amino acid usage in the published universe of linear antimicrobial peptides," says Michael A. Zasloff of Georgetown University. "Linguists could now be justifiably included as part of a team developing new antimicrobial peptides."

It's too early to tell how effective the method will be in producing commercial antimicrobial products. Other researchers taking a high-throughput synthetic approach have been successful at producing potent new antimicrobial peptides. For example, Robert E. W. Hancock and his colleagues at the University of British Columbia showed last year that arrays of variants to a bovine antibacterial peptide produced a selection of peptides that were lethal to a variety of infamous pathogens (Nat. Biotech., 2005, 23, 1008).