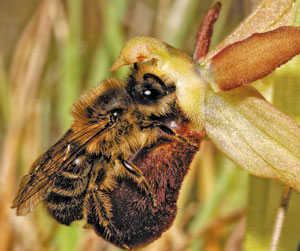 THE SCENT OF foreign females is a more potent attractant than a whiff of the girl next door—at least for European male bees.

European orchids exploit the male bees' predilection for expat females to their advantage, releasing odors very similar but not identical to the sexual hormones of the female bee. Male bees like the foreign potion so much that they will preferentially chase the flower scent over the female bees' pheromone cocktail. The orchids use this sexual deception to facilitate their own pollination, according to a new study (Proc. Nat. Acad. Sci. USA, DOI: 10.1073/pnas.0800194105).

"The flowers are code breakers; they have beaten the female bees to the ideally attractive signal for males," comments Robert Raguso, a chemical ecologist at Cornell University.

That the bees, Colletes cunicularius, prefer the orchid scent over the real McCoy came as a surprise, says the study's lead author, Nicolas J. Vereecken, a chemical ecologist at the Free University of Brussels. When Vereecken and collaborator Florian P. Schiestl from the University of Zurich set out to investigate how Ophrys exaltata orchids trick male bees into mating, they thought the orchids would release a precise chemical mimic of indigenous female bee pheromones, which is composed of 60 different chemicals. "We were expecting the flowers to release mating signals that accurately imitated local female bee sex pheromones," Vereecken says.

But instead of precisely copying the local female bees' bouquet, the orchid's scent contains a higher relative proportion of (Z)-7-tricosene, (Z)-7-pentacosene, and (Z)-7-heneicosene. Since the relative concentrations of bee pheromone components typically vary slightly with distance, the orchids are masquerading as foreign female bees, Vereecken explains.

Orchids may have developed the more attractive perfume because the flowers experience a higher selection pressure than do female bees. "There are so many male bees and so few females that pretty much every female is fertilized as soon as she emerges from the ground, but only 10% of flowers experience a bee visitation. So the orchids are more limited in reproductive success" than female bees, Vereecken says.

Male bees may be attracted to slightly unusual pheromone mixtures because they typically don't travel far to find mates, and so foreign signals, seemingly from nearby bee populations, may be preferred to avoid inbreeding, Vereecken adds.

The next big question is "whether this preference changes over time," Raguso notes. "The orchid can't be too successful or it would outcompete female bees for male attention," and then there would be fewer bees to pollinate orchid flowers in the future, he says. How bees and flowers resolve such romantic tensions is a subject for future research.

Chemical Communication
Bumblebees sniff and taste microbial compounds in flower nectar
Environment
How mimicking a bee under attack can attract pollinators
Environment
Ascension To Queendom
Share X
To send an e-mail to multiple recipients, separate e-mail addresses with a comma, semicolon, or both.
Title: Love Potion
Author: Sarah Everts
Chemical & Engineering News will not share your email address with any other person or company.