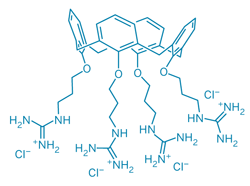 By changing the structure of a macrocyclic compound, researchers in Italy have created a more efficient type of reagent for transfection, which is the delivery of DNA or RNA into cells (Org. Lett., DOI: 10.1021/ol801326d). Genetic engineers use transfection reagents to alter a cell's gene expression and protein production. A team led by Francesco Sansone and Rocco Ungaro of the University of Parma reports preliminary studies showing that a formulation containing a calix[4]arene macrocycle delivers DNA more reliably than a commercially available transfection reagent. The team had previously modified the aromatic rings on calix[4]arenes with guanidinium groups, which are known to ferry compounds into cells. The macrocycles bound DNA, but they were inefficient at transfection and toxic to cells. In the team's new calix[4]arenes, the attachment points for the guanidinium moieties are hydroxyl groups, to good effect. The new reagents have low toxicity and efficiently transport DNA into a variety of cells. Traditional viral transfection agents can provoke an immune response, Sansone says. Lipid-based agents don't work in every type of cell, and most are poorly structurally characterized, impeding mechanistic studies aimed at improving them, he adds. The team now hopes to exploit calixarenes' synthetic flexibility to carry out such optimization studies.