After more than a decade, EPA's program has not begun screening a single chemical

UNCERTAIN FUTURE
[+]Enlarge
Credit: Shutterstock/C&EN
Chemicals such as bisphenol A (shown) have the potential to cause developmental effects in fetuses, but EPA is doing little to determine which ones should be regulated. 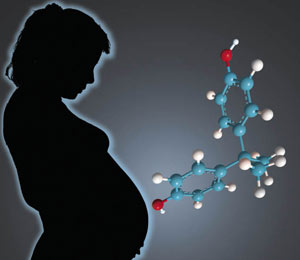 Credit: Shutterstock/C&EN
Chemicals such as bisphenol A (shown) have the potential to cause developmental effects in fetuses, but EPA is doing little to determine which ones should be regulated.

IT HAS BEEN 12 YEARS since Congress ordered the Environmental Protection Agency to develop the Endocrine Disruptor Screening Program (EDSP) to test pesticides and other chemicals for their ability to mimic hormones and disrupt the endocrine system. After missing numerous deadlines and spending more than $100 million on the program, EPA has yet to test a single chemical. Many people are wondering whether EDSP will ever get off the ground, and critics are saying it's time to scrap the program and start over.

Frustrated by EPA's foot-dragging, Congress added language to EPA's 2008 appropriations bill that directed the agency to finalize the initial list of chemicals and assays to be used in EDSP and issue the first test orders by the end of August of this year.

To date, however, EPA has only issued a draft list of 73 pesticides or inert ingredients used in making pesticides that will undergo screening and a draft list of assays to be used in EDSP. The failure of EPA to meet its deadlines and come up with finalized lists has raised big concerns within the scientific community.

"The whole program is a waste of time, money, and animal lives," says Scott Slaughter of the Center for Regulatory Effectiveness (CRE), a watchdog group that provides Congress with analyses of federal agency regulations.

The latest delay comes after EPA received a series of petitions in July from various stakeholder groups. CRE filed one of those petitions, arguing that a key EDSP assay for measuring thyroid effects—the amphibian metamorphosis assay—is not reproducible and has not been properly validated. "It went through peer review and flunked," Slaughter emphasizes. And that is just the tip of the iceberg, he tells C&EN. "There are lots of problems with the other tests; we just picked the amphibian assay mainly because it seemed so obviously wrong to us."

CropLife America, a trade group that represents pesticide manufacturers, also filed a petition with EPA in July asking the agency to explain why existing data on reproductive and developmental toxicity of pesticides do not meet the needs of the program. The group emphasizes that Congress mandated EPA's EDSP to minimize duplicative testing. "Pesticides are extremely data-rich compounds, and EPA has a big treasure trove of data on them. So we feel it is unfair to ask us to do screening-level assays that determine the potential for a chemical to interact with hormonal systems when EPA already has that data in their repositories," says Erik Janus, human health policy leader at CropLife America.

The pesticide group is also questioning the validity of several of the tests EPA plans to use in EDSP. Last spring, CropLife America recommended that EPA use a truncated approach that includes only those tests that have been properly validated. But no one seems to agree on the definition of validation. EPA claims that nine of 11 assays to be used in the initial screening phase of the program, including the amphibian assay, are validated. Various groups disagree with that assertion, saying that many of those tests did not pass peer review.

Critics also argue that EPA isn't ready to launch the program because it hasn't validated any of the second-tier tests. Chemicals that fail the first screening battery of assays will be required to undergo a second round of more extensive testing. EPA acknowledges that none of those second-tier tests have been validated. It is also unclear how many of the 11 first-tier assays a chemical has to pass to avoid second-tier testing.

EPA says that it was unable to meet EDSP deadlines set by Congress under the 1996 Food Quality Protection Act and amendments to the Safe Drinking Water Act because it had to validate all of the assays. Initially, EPA was mandated to implement the program by August 1999 and report back to Congress by August 2000.

When EPA did not meet those deadlines, the environmental group Natural Resources Defense Council (NRDC) sued the agency. As part of that settlement agreement in 2001, EPA was given a new set of deadlines, including having all tests validated by 2005. It has missed all of those by a long shot, says Sarah Janssen, a science fellow at NRDC.

WASTED LIVES
[+]Enlarge
Credit: Shutterstock
EPA's EDSP will be one of the most animal-intensive efforts the agency has ever initiated, critics claim. 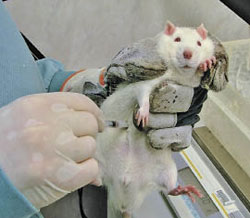 Credit: Shutterstock
EPA's EDSP will be one of the most animal-intensive efforts the agency has ever initiated, critics claim.

PART OF THE PROBLEM is that EPA made a decision in 1998 to expand the program beyond testing for endocrine effects in humans and is now also considering effects in wildlife, says Dan Kinburn, legal counsel for the Physicians Committee for Responsible Medicine (PCRM). "That made what was already a difficult undertaking an almost impossible one," he notes. In 2005, PCRM petitioned EPA to narrow the program back down to just testing for human effects. The petition turned into a lawsuit, which is now tied up in appeals court.

Missed deadlines aside, one of the biggest concerns that has emerged about EDSP is how animal intensive it will be. "If this actually gets off the ground, this will become the largest animal-testing program that EPA ever initiated," says Kate Willett, science policy adviser with the animal rights organization People for the Ethical Treatment of Animals. She and others argue that EDSP is a waste of animal lives. "This program doesn't make a lot of sense. EPA itself has no clue what it is going to do with these data, if anything," she emphasizes. "There's a lot of evidence that there are endocrine modulators in the environment. But how is EPA going to use this information to regulate compounds?"

EPA maintains that it still intends to launch EDSP in early 2009. The agency believes that by the time it gets the data back from first-tier testing on its initial list of chemicals, which is expected to be 2010 at the earliest, it will have validations for the second-tier tests in hand.

Meanwhile, scientists are developing new approaches that are likely to be faster, cheaper, and better than those that EPA has been considering for EDSP. In 2007, for example, the agency's own National Center for Computational Toxicology (NCCT), based in Research Triangle Park, N.C., launched a program called ToxCast, which eventually will be used to predict the toxicity of thousands of chemicals with the help of high-throughput, human cell-based assays and predictive computational methods (C&EN, Aug. 13, 2007, page 36).

TO TEST the ToxCast system, researchers have taken more than 300 pesticides and a handful of other chemicals, including estrogenic compounds such as phthalates and bisphenol A, and put them through as many high-throughput assays as possible, NCCT Director Robert J. Kavlock says. The chemicals were chosen because of the wealth of toxicological data that the agency has on them, he explains. Of the 320 chemicals, 56 of them are on EPA's draft list of compounds for the first round of testing under EDSP. It is unclear how the ToxCast results on these chemicals will feed into EDSP.

EPA currently considers ToxCast a research program, Kavlock tells C&EN. "When we can get to the point where we can show the program offices and convince them and the outside world that we've got a better mousetrap, then they can start to think about it from a regulatory standpoint," he adds.

Because of the delay in getting EDSP up and running, some people who previously thought the program was a good idea are now questioning it. In addition, people who believe the program is worthwhile and will result in a powerful chemical-screening infrastructure are asking EPA to expand the program beyond pesticides.

"Pesticides should not necessarily be the main target for this," says James T. Stevens, a professor of physiology and pharmacology at Wake Forest University and former employee of the pesticide company Syngenta. Chemicals that have not been through thorough toxicology testing—mostly industrial chemicals—are the ones that should be the targets, he adds. In Stevens' opinion, EPA is using the pesticides to further attempt to validate its screens.

Those who have been involved with the program since the beginning are frustrated and ready for EPA to call it quits. "I think we have to go back and start all over," says Theo Colborn, a longtime endocrine disruptor researcher, environmental activist, and coauthor of the book "Our Stolen Future," which brought the endocrine disruptor issue to the forefront in 1996.

Colborn claims that EDSP was flawed from the beginning because EPA never listened to bench scientists and instead stacked its advisory panels with industry representatives. "It's time to start over with a whole new approach and bring those who discovered endocrine disruption to the table," she emphasizes.