SHIVERING INSIDE a tent in an isolated area of Antarctica, Tufts University professor of chemistry Samuel P. Kounaves could barely feel his fingers as he tried to keep the solution in his pipette from freezing. Outside the tent, the temperature was –30 ºC. The barren, cracked land in these so-called dry valleys looked eerily like Mars.

In fact, that's the reason Kounaves and colleagues embarked on this three-week expedition in December 2007. They wanted to do a trial run of analytical instruments that would be taken to Mars by the Phoenix Lander, and these dry valleys in Antarctica are similar to some regions of the red planet.

"In chemistry, you think a lot of us just want to be in the lab, but, in reality, I think a lot of chemists are extroverts and they enjoy going out into the world and doing things," Kounaves says. "We're explorers at heart." 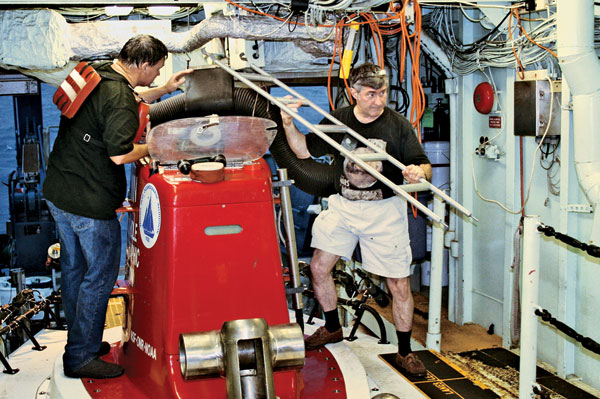 Kounaves isn't alone in seeking answers to scientific questions in such extreme environments. As chemistry becomes increasingly interdisciplinary, chemists are finding more opportunities to do fieldwork, which has traditionally been the domain of researchers in the natural sciences, in areas such as oceanography and vulcanology. In this stormy job market, the ability to work at the intersection of multiple scientific disciplines and to be imaginative about how chemistry is applied to big-picture problems could provide a safe haven.

Fieldwork can take many forms, from a local half-day trip to a monthlong excursion to the other side of the world. The example of Kounaves and two other chemists working on the far end of the spectrum demonstrates that there's no limit to what chemists can do.

Tamsin A. Mather, an academic fellow in the earth sciences department at the University of Oxford, understands the trials and tribulations of doing fieldwork in extreme environments. She studies the atmospheric chemistry of volcanic plumes and their effects on the environment.

Mather says that the most extreme place she's worked in is Lascar Volcano, in the Chilean Andes. What made it so challenging for her team is the high altitude, which made the climb to the summit—while carrying all their equipment—that much more difficult. Not only that, but the remote-sensing device they had brought with them stopped working. "You always try to anticipate problems," she says. "But of course, things always occur that you can't anticipate." 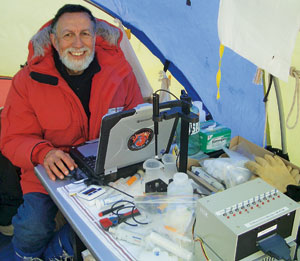 At the same time, Mather says she wouldn't trade the experience for the world. "I feel privileged to be able to work in some really beautiful places," she says. Mather has also studied the gas geochemistry of volcanoes in Hawaii, Nicaragua, and Italy.

IF RESEARCH atop volcanoes isn't exciting enough, imagine spending an entire day in a tiny closet with two other people. That's what it feels like in the deep-sea submersible Alvin, says George W. Luther III, the Maxwell P. & Mildred H. Harrington Professor of Oceanography at the University of Delaware, who studies sulfur and iron biogeochemistry at hydrothermal vents.

Alvin's chamber, essentially a titanium ball that's seven feet in diameter, is so small that only one person can stand at a time. The other two people have to be lying flat in the ball, and sometimes their legs get tangled, Luther says. What's more, there are no bathrooms, heating, or air conditioning. "It's exhausting going down in Alvin," says Luther of the daylong dives. "It's one of the most intense days of science you'll ever have in your life."

Inside Alvin, a pilot navigates the submarine to areas where hot chemicals are spewing out of hydrothermal vents or farther down the chimney where all the organisms are. Using laptops that are wired through the hull, Luther and the other scientists collect data from sensors attached to the outside of Alvin.

"Our goal is to try to understand the chemistry that these organisms are living in so we can better understand why they live in the ecological niches that they live in," Luther says. "There's an awful lot that we don't know about how they uptake chemicals and perform their chemosynthesis."

Luther's research cruises have included deep-sea expeditions in the Mediterranean Sea, the Black Sea, and the Arabian Sea. So far, he's done 14 dives in Alvin.

As exciting as their jobs sound, these chemists are not primarily after the thrill of adventure. Instead, they say, they're driven by the science. "I'm not somebody who goes out to find tough places to get samples from just for the sake of it," Mather says. "But if the science justifies it, then that's very exciting."

Nevertheless, it's safe to say that these chemists are all explorers at heart. Kounaves says that when he was a child, he wanted to be an astronaut because he was fascinated with space exploration. As an undergraduate at California State University, San Diego, Kounaves couldn't decide between physics, biology, and engineering, so he ended up majoring in chemistry.

In graduate school at the University of Geneva, in Switzerland, he focused on environmental chemistry and immersed himself in fieldwork. As he studied the environment on Earth, he began to wonder, "What about environments on other planets?" Little by little, he gravitated back to his childhood dream of space exploration. Today, Kounaves is the science lead for the Phoenix Mars mission's wet chemistry lab.

Unlike Kounaves, Luther considers himself a late bloomer in the world of extreme chemistry. He earned a Ph.D. in physical inorganic chemistry from the University of Pittsburgh in 1972 and taught chemistry and physics at Kean College of New Jersey for 14 years. While attending scientific meetings, Luther found himself engaging in conversation with many oceanographers who were doing extensive fieldwork. "The next thing I knew, I found that this was kind of interesting," he says.

ON THE EDGE
[+]Enlarge
Credit: David Pyle
Wearing a gas mask, Mather sits on the crater rim of Villarrica Volcano, in Chile, after collecting gas and aerosol samples. 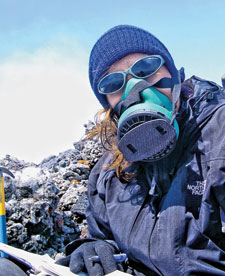 In 1986, he joined the University of Delaware's College of Marine Studies. The following year, Luther took his first major expedition to the Mediterranean Sea to study hypersaline and anoxic brines at the bottom of the sea. The next year, he went on a research expedition to study chemical reactions in the Black Sea. After that, he was hooked. "It's possible at almost any part of your career to get involved in this kind of work," he says.

At age 31, Mather is the youngest of the extreme chemists C&EN interviewed. She says that after receiving an M.S. degree in chemistry, she decided to pursue research with a more environmental angle. She also knew she didn't want to be in the lab all the time. She found the perfect match with her Ph.D. work on volcanic atmospheric chemistry.

Mather says that doing fieldwork allows her to stay in touch with the big picture of what she's doing. "In my line of science, if you don't go out some of the time, you sort of lose touch a little bit with how the samples are being collected, and it's good to see something through from collection to analysis to writing the paper. That way, you get a very thorough understanding of the science."

DOING EXTREME chemistry doesn't have to interfere with your work-life balance. The chemists point out that their time in the field encompasses only a small percentage of their jobs. Mather says she spends only about four weeks a year doing fieldwork. Luther spends one to two months a year doing fieldwork. And Kounaves is out in the field for about five weeks every two years. The rest of the time, the researchers are back at their universities analyzing data and writing their papers. Mather says that's actually the part of her job she finds most exciting because "that's when you start making sense of the results you pulled in."

As Kounavis, Luther, and Mather show, chemists can decide to go extreme at any point in their career. "The important thing is to realize that you have the ability to enable yourself to do these things," Kounaves says. "Just because you're a chemist doesn't mean you're limited to doing exactly what chemists are supposed to be doing." What's critical is finding a scientific topic that you're passionate about, Luther says.

Mather agrees. "You have to enjoy the science," she says; otherwise, the fun stops at the end of the adventure.