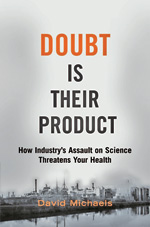 WITH NAMES LIKE the Center for Consumer Freedom, Foundation for Clean Air Progress, International Society for Regulatory Toxicology & Pharmacology, and Council on Water Quality, you might think these groups are out to protect public health and the environment. Think again, says David Michaels, an epidemiologist at the George Washington University School of Public Health & Health Services and author of the book “Doubt is Their Product: How Industry's Assault on Science Threatens Your Health

These organizations and many other front groups like them are paid for by industry and exist for the sole purpose of creating uncertainty in scientific debates, Michaels asserts. In his book, Michaels reveals the prevalence of such product defense groups. He also points out that several of the players behind them are the same ones who defended the tobacco industry beginning in the 1950s.

In addition to creating front groups with names suggestive of public interest groups, industry has a long record of hiring various think tanks and consulting firms to defend their products. “Having cut their teeth manufacturing uncertainty for Big Tobacco, scientists at Chem Risk, the Weinberg Group, Exponent Inc., and other consulting firms now battle the regulatory agencies on behalf of the manufacturers of benzene, beryllium, chromium, MTBE (methyl tert-butyl ether), perchlorate, phthalates, and virtually every other toxic chemical in the news today,” Michaels writes.

In what he calls the “enronization of science,” Michaels provides numerous examples of how the product defense industry has helped corporations stave off regulations and win lawsuits over injury and illness claims. He makes the analogy to the now-defunct energy company Enron, saying that the scientific studies conducted by product defense firms “are like the accounting work that some Arthur Andersen Co. accountants did for Enron (until both companies went bankrupt): They appear to play by the rules of the discipline, but their objective is to help corporations frustrate regulators and prevail in product liability litigation.”

Exponent Inc. is one of the firms that come up time and time again in the book. Michaels tells how it got its start in the 1960s helping the auto industry defend itself against lawsuits involving crashes and then went on to defend amusement park rides, soda machines in schools, and several chemicals, including the foul-smelling gasoline additive MTBE, the commonly used herbicide atrazine, and perchlorate—a contaminant best known for its use in rocket fuel. For each of the chemicals, he says, Exponent downplayed the risks of exposure.

“ANOTHER MAJOR PLAYER is the Weinberg Group,” Michaels writes. In 2003, the group helped chemical manufacturer DuPont avoid lawsuits and regulation related to perfluorooctanoic acid, a chemical used in making the nonstick coating Teflon, he says. At the same time, he points out, the firm was also defending a manufacturer of ephedra dietary supplements in an attempt to stop FDA from banning the weight-loss pills.

The number of examples that Michaels provides is dizzying and difficult to keep track of, but his entertaining writing style helps keep the reader engaged. The book is worth keeping on the shelf as a handy reference for those looking to get the scoop about a particular public relations firm or consulting group. Michaels also refers the reader to the website of the Center for Media & Democracy, which provides another invaluable—although not free—tool for keeping track of deceitful organizations.

One of the groups this organization monitors is the Center for Consumer Freedom, “which uses funding from the food and restaurant industries to attack studies that link fat consumption to obesity,” Michaels writes. The group also promoted the idea that mercury in fish is safe for pregnant women in a campaign it called FishScam, he adds.

In his book, Michaels reveals how such organizations have manipulated the peer-reviewed scientific literature by “salting” it with their carefully designed studies. After all, he writes, a study isn’t worth much in legal or regulatory circles if it has not been given the gold stamp of approval often associated with scientific peer review.

For example, “When a study by consulting epidemiologists discovered a high rate of prostate cancer cases at a Syngenta plant that produced the pesticide atrazine, Exponent’s scientists produced a study that found no relationship between the chemical and the disease,” Michaels writes. 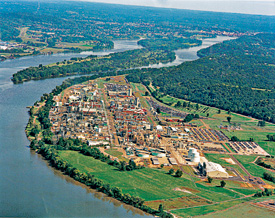 In another instance, a scientist working for the International Carbon Black Association, an industry group, delivered three papers to a panel of the World Health Organization’s International Agency for Research on Cancer, which was about to meet to consider whether carbon black—a starting material for many new nanotech products—is a carcinogen. All three papers were fast tracked through peer review and published in the Journal of Occupational & Environmental Medicine, Michaels points out. They all disputed the relationship between carbon black and lung cancer.

In some cases, groups have launched their own journals, secretly financed by industry, with carefully chosen peer reviewers who have like-minded corporate interests. To the average person, these vanity journals appear to be independent, unbiased sources of scientific information. They have fooled many a reporter, judge, jury, and member of Congress, Michaels writes. “Moreover, some scientists and certainly most nonscientists ... do not know what those papers are worth,” he says, adding that he finds the lack of outrage by honest scientists and regulators about this issue distressing.

Two examples that Michaels provides in the book include Indoor & Built Environment, a journal launched and paid for by the tobacco industry to convince people that indoor air pollution is caused by inadequate ventilation, not secondhand smoke; and Regulatory Toxicology & Pharmacology, which Michaels calls “the official mouthpiece of the International Society for Regulatory Toxicology & Pharmacology ... an association dominated by scientists who work for industry trade groups and consulting firms.”

But as Michaels points out, perhaps the most disgraceful tactic used by industry is harassment of well-respected scientists. Promoting what they call “sound science,” the product defense industry and the corporations that fund them have attacked the work of prominent researchers, including several who went on to be elected into the prestigious Institute of Medicine, he says. They have even gone so far as to label any science that goes against their corporate interests as “junk science” and have created a website (junkscience.com/roster) to showcase who the junk scientists are, he writes. The site lists a wide range of scientists who study issues from air pollution and global warming to diet drugs and breast implants.

Michaels is one to know the difference between sound science and, as he puts it, “sounds like science.” Having served as the assistant secretary for environment, safety, and health in the Department of Energy under the Clinton Administration, he has witnessed firsthand many of the tricks of the trade used by industry. In his book, he shares the story of how he endured a long, drawn-out battle with the beryllium industry to lower acceptable exposure levels for DOE workers.

Although the history is interesting and appropriate for putting things into context, Michaels devotes too much space to events that happened many years ago. In addition to the beryllium story, he provides exhausting accounts of the various attempts by industry to defend tobacco, lead, vinyl chloride, asbestos, chromium, carcinogenic dyes, and numerous other chemicals. With the exception of a few examples, such as diacetyl—the artificial butter flavorant linked to “popcorn lung,” a severe lung disease developed by workers in the microwave popcorn industry—most of the issues that he discusses in depth are old news.

THE TACTICS USED by the tobacco industry in the 1950s and the decades that followed are alive and well today. Michaels provides many examples of issues that occurred during the Bush Administration, but he mentions them only briefly. More emphasis on current affairs and less on history would have improved the book.

Michaels does note that the work of product defense groups is more rampant now than during any other time in history. “I believe it is fair to say that, in the Administration of President George W. Bush, corporate interests successfully infiltrated the federal government from top to bottom and shaped government science policies to their desires as never before,” he writes.

To provide more balance, Michaels should have also pointed out that numerous environmental and public health groups have also started playing the game to influence policy decisions. To Michaels’ credit, he does scold some environmental activists for taking the precautionary principle too far with respect to food irradiation. The precautionary principle puts the burden on industry to prove to government that their products cause no harm. But that is the only example Michaels provides of how environmental activists have attempted to influence policy. Most of the book is devoted to examples that show the corrupt side of industry.

Clearly, as Michaels eloquently describes, the current U.S. regulatory system is broken when it comes to protecting public health and the environment. Policymakers often find themselves confused about the science as both industry groups and environmental activists try to sway them.

When government agencies fail to get the job done, the work gets passed along to the courts. If it weren’t for lawsuits, the hazards of tobacco, asbestos, and many other substances would probably still be debated today. It is unfortunate that we need the judicial system to play this role, but as Michaels puts it: “Litigation works, and it will need to work overtime in the years ahead. Unless the regulatory system is radically restructured and strengthened, it will never have both the carrots and the sticks necessary to ensure responsible corporate behavior.”

To that end, Michaels suggests a dozen ways to improve the current regulatory system. His proposals address scientific completeness, full disclosure of conflicts of interest and sponsor involvement, and accountability and responsibility. The way regulatory agencies interact with industry and the way they use science should also be overhauled, he writes.

The take-home message from Michaels’ book is clear: Regulatory agencies should not wait for absolute scientific certainty when it comes to protecting public health and the environment. Instead, they should “use the best science available” and not “demand certainty where it does not and cannot exist.” Michaels emphasizes, “To wait for certainty is to wait forever.”