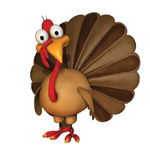 Thanksgiving week is here. So let’s take a moment to talk turkey. Last year, 272 million turkeys were raised in the U.S., according to U.S. Department of Agriculture statistics. With those birds comes a lot of turkey poop.

Most turkey manure ends up as fertilizer, but as the demand for non-fossil-fuel energy grows, more people are looking to turn the smelly waste into energy. The thought of burning TURKEY LITTER to make electricity on a large scale was unheard of in the U.S. until Pennsylvania-based Fibrowatt was founded in 2000. The company claims its management team “built the world’s first three poultry-litter-fueled power plants in the U.K. in the 1990s.”

Last year in Minnesota, 48 million turkeys were raised—the most in any U.S. state—and Fibrowatt opened what it says is “the first poultry-litter-fueled power plant in the U.S.” The Minnesota plant, Fibrominn, is located in rural Benson, a town of 3,386 people, according to the 2000 census. Besides the new biomass plant, the only other thing going on in town is ethanol production, some of it at the Shaker’s Vodka distillery.

The process of converting turkey poop to fuel is simple: Burn turkey litter to boil water to make steam, which drives a turbine that generates electricity. Fibrowatt’s process uses combustion temperatures above 1,500 °F and high-pressure steam at 850 °F. The company claims the process is carbon neutral, meaning that the amount of carbon released is equal to the amount sequestered or offset.

Although the technology gives turkey farmers an alternative way to dispose of their waste, some people think the idea stinks. A campaign called FibroWATCH aims to stop Fibrowatt and what it calls poultry-litter incineration. Not only does the process smell, the group says, but it is not economical. Without incentives from the state, the Fibrominn plant probably would not have been built.

Poop scooper:
[+]Enlarge
Credit: Fibrowatt
Some of the waste from the millions of turkeys consumed this week will be converted into renewable energy. 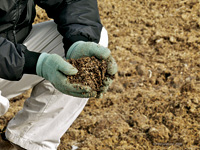 Credit: Fibrowatt
Some of the waste from the millions of turkeys consumed this week will be converted into renewable energy.

The group is also concerned about air pollution, particularly hydrochloric and sulfuric acid emissions, as well as heavy metals such as arsenic in the ash.

Fibrominn reportedly does a good job of keeping the stench inside the plant and says it meets Minnesota’s air pollution requirements. It sits on 77 acres and uses more than 500,000 tons of poultry litter annually, most of which is supplied by Minnesota turkey farmers. It generates 55 MW, enough for about 40,000 homes.

Fibrowatt now has its eye on the second largest turkey state—North Carolina—which raised 39 million turkeys in 2007. The company is also actively working on projects in Arkansas, Georgia, Maryland, and Mississippi, and it has plans for projects in Alabama and Texas.

A company called Changing World Technologies (CWT) made headlines in 2003 for its apparently miracle-making thermo-depolymerization technology that turns waste from a Butterball turkey processing plant in Carthage, Mo., into oil. The company now admits that the process is much more expensive than originally thought.

Even so, according to CWT’s latest press release, its “Renewable Environmental Solutions subsidiary can convert approximately 250 tons/day of turkey offal and fats into approximately 20,000 gallons of a renewable diesel fuel oil and valuable fertilizer products.”

Few details are available about CWT’s technology. The company claims its “thermal conversion process mimics the earth’s natural geothermal process by using water, heat, and pressure to transform organic and inorganic wastes into oils, gases, carbons, metals, and ash. Even heavy metals are transformed into harmless oxides.” Skeptics say it sounds too good to be true.