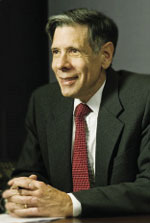 THE FOOD & DRUG Administration has faced numerous scientific challenges over the past two years, including two major Salmonella outbreaks, adulterated heparin, and melamine contamination in infant formula and pet food. The agency's top spot is currently vacant, and its credibility has sunk to an all-time low. But during this transition period, while FDA waits to see who will be its next commissioner, science has moved to front and center stage.

FDA is currently being led by its chief scientist, Frank M. Torti, a prominent clinician and researcher in molecular oncology. Torti joined FDA last April and was named acting commissioner on Jan. 20.

While waiting for the Obama Administration to select a permanent agency head, Torti is focusing FDA on what he knows best—and that's science. He is also taking steps to make the agency's regulatory decisions more transparent to the public.

One noticeable change at FDA is an increased emphasis on external input. Torti has been working to beef up FDA's science board, a group of external experts who advise the agency on emerging scientific issues. He enlarged the board, adding new members with expertise in areas such as regenerative medicine, molecular biology, and information technology. He also initiated a new schedule for the science board to meet four times a year, twice as often as it has in the past.

At the board's first meeting under its revised charter on Feb. 24, Torti highlighted overarching scientific priorities for FDA to focus on over the next few years, emphasizing that the projects can't be wrapped up in a single year. One of the most scientifically challenging problems FDA faces is "the detection of adverse events, particularly rare events," such as unusual side effects of new drugs, he noted. "It involves informatics, personalized health records, mechanisms for coding and tracking devices and drugs, and interrogation of complex data sets with a high signal-to-noise ratio."

Recent problems associated with adulterated heparin drugs, as well as with melamine in milk powder and pet food, have also led FDA to take a closer look at what it calls economically motivated adulteration (EMA). Randall Lutter, deputy commissioner for policy at FDA, told the board that the agency is investigating what products are at high risk for adulteration and what assays need to be improved. FDA is planning to solicit more input at a public meeting this spring and is particularly interested in hearing from chemists who can think like criminals, Lutter said.

THE TOPIC quickly opened a discussion about how to get such information to FDA. The last thing the agency should do is hold a public meeting to discuss creative ways to adulterate the food and drug supply, members of the board stressed.

"After 9/11, there was a lot of work done on behalf of the food industry to identify where the vulnerabilities are," commented board member Rhona Applebaum, vice president and chief scientific and regulatory officer at Coca-Cola. A lot of lessons can be learned from the results of that work, she said. She also cautioned that "you don't want to provide a how-to guide to people who have a deviant mind."

Douglas Throckmorton, deputy director of FDA's Center for Drug Evaluation & Research, pointed to similarities between EMA and drug counterfeiting. He said products that are expensive, used by large numbers of people, and not heavily regulated—such as dietary supplements—are the ones most likely to be counterfeited.

Examining sources of exposure to the controversial plastics chemical bisphenol A (BPA), which has been shown to leach from polycarbonate baby bottles and the lining of food cans, is also a top priority for FDA. The agency still says BPA, a known endocrine disruptor, is safe in food containers, but it continues to study the issue. It is collaborating with the National Institutes of Health to investigate associations between urinary BPA levels and specific diseases, such as heart disease, diabetes, and cancer.

FDA is also continuing to look at exposure to BPA from medical products. The agency already has examined BPA exposure from dental sealants and found it to be very low relative to that from food. FDA is now investigating exposure to BPA from medical devices that have direct contact with blood, such as cardiopulmonary bypass circuits used in open-heart surgery and hemodialysis circuits. Included in this investigation is an examination of alternatives to BPA because they pose unknown risks and have unclear effects on device function, said Jonathan Sackner-Bernstein, an associate director in FDA's Center for Devices & Radiological Health.

The agency is also putting more emphasis on communication and plans to launch a new peer-reviewed e-journal in the area of regulatory science. It hopes to have the journal up and running and to name an editor in chief by July, Torti said.

Safety
COVID-19 pandemic has spurred materials researchers to develop antiviral masks
Industrial Safety
The chemistry behind the Beirut explosion
Consumer Safety
Do we know enough about the safety of quat disinfectants?
Share X
To send an e-mail to multiple recipients, separate e-mail addresses with a comma, semicolon, or both.
Title: FDA In Flux
Author: Britt E. Erickson
Chemical & Engineering News will not share your email address with any other person or company.