TAKING DNA APART one nucleotide at a time, directing the nucleotides sequentially into a nanopore, and detecting them with an electrical current meter may seem an unlikely DNA-sequencing concept, but it is closer than ever to being a reality.

Chemical biology professor Hagan Bayley of the University of Oxford and coworkers there and at Oxford Nanopore Technologies, a company Bayley founded, have just demonstrated that the four standard DNA nucleotides—adenine, thymine, guanine, and cytosine—can be distinguished from one another reliably by the amount of current they each block as they flow through a nanopore (Nat. Nanotechnol., DOI: 10.1038/nnano.2009.12). And for good measure, they've shown that the method can also identify 5-methylcytosine, a biologically important modified nucleotide.

DNA sequencing with a nanopore (Nat. Biotechnol. 2008, 26, 1146) is one of several technologies being investigated as potential routes to the $1,000 genome???the ability to sequence a human genome for about $1,000. Currently, human genome sequencing costs anywhere from $100,000 to $1 million. The $1,000 genome could ease the way to personalizing drug or medical treatments according to a patient's genomic makeup. 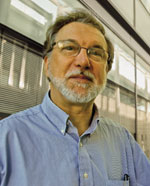 A key advantage of nanopore sequencing is that it detects nucleotides directly, without reagents or labeling, from a single molecule of single-stranded DNA. All current DNA-sequencing techniques require fluorescent or luminescent labeling, and most use polymerase chain reaction for DNA amplification. Nanopore technology is also potentially capable of sequencing much longer continuous strands of DNA than other techniques. This capability is becoming increasingly important for studies of long-range genomic complexity to associate DNA rearrangements with cancer and other diseases.

Three years ago, Bayley and coworkers detected DNA nucleotides in nanopores formed by embedding molecules of bacterial α-hemolysin protein in a biological membrane (J. Am. Chem. Soc. 2006, 128, 1705). Inside each hemolysin they lodged cyclodextrin, which acts as an "adapter" molecule that interacts with the nucleotides transiently as they pass one by one through the pore. When nucleotides interact with cyclodextrin, they interrupt a current running through it, and the four nucleotides can be distinguished by the different amounts of current they block.

But in that study the electrical current signals from the different nucleotides overlapped, making identification only about 90% reliable. Exonuclease, which is needed to cleave nucleotides from single-stranded DNA and feed them into the nanopore, was not present in the nanopore experiments. And cyclodextrin was not covalently attached to the nanopore and thus floated around a bit during the experiments, causing periodic signal interruptions.

EVENTUAL GOAL
[+]Enlarge
Credit: Oxford Nanopore Technologies
Nanopore DNA sequencing, as envisioned, will use an exonuclease (green) to cleave nucleotides from DNA. Each nucleotide will be directed into the nanopore (blue), where it interacts with a cyclodextrin "adapter" (red, donut-shaped) and interrupts a current to an extent that pinpoints its identity (such as G = guanine, C = cytosine, and T = thymine). 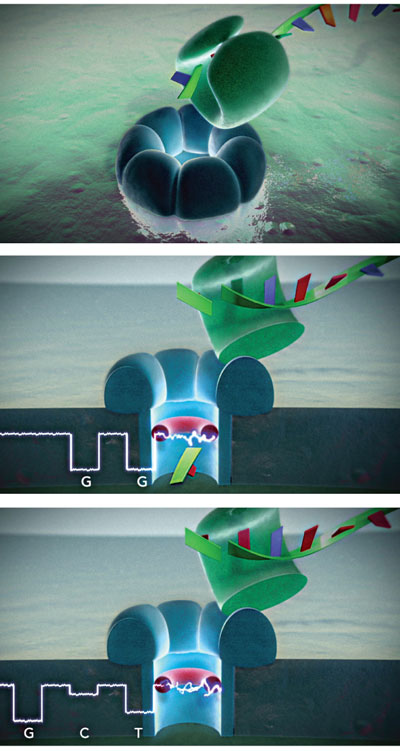 Credit: Oxford Nanopore Technologies
Nanopore DNA sequencing, as envisioned, will use an exonuclease (green) to cleave nucleotides from DNA. Each nucleotide will be directed into the nanopore (blue), where it interacts with a cyclodextrin "adapter" (red, donut-shaped) and interrupts a current to an extent that pinpoints its identity (such as G = guanine, C = cytosine, and T = thymine).

IN THE NEW WORK the researchers used exonuclease in solution to cleave the DNA, glued the cyclodextrin to the nanopore, and thus greatly improved the ability to distinguish the four nucleotides (to an average 99.8% accuracy).

As their coup de grace, they also distinguished 5-methylcytosine from the unmethylated nucleotides. 5-Methylcytosine is important for studies of genomic methylation patterns and epigenetics, the inheritance of traits by means other than DNA sequence changes.

To be a viable route to the $1,000 genome, nanopore sequencing still must overcome a number of hurdles. For example, the researchers will need to demonstrate that they can attach the exonuclease directly to each nanopore and that the enzyme can feed single nucleotides into the pore after chopping them off the DNA strand being sequenced. They will also need to show that all the nucleotides in a sequence can be directed through the nanopore in order without any going astray or clumping together in the pore. In the current study exonuclease was floating around freely in solution, and the nucleotides detected floated into the nanopore by chance, not in order by sequence.

Jeffery A. Schloss, director of the $1,000 genome grant program at the National Human Genome Research Institute at the National Institutes of Health, says Bayley and coworkers "showed that one can operate the system under conditions where an exonuclease can function and still get the released nucleotides to pass through the pore and distinguish them. It's a significant engineering achievement toward the next step, which would be to attach an exonuclease to the nanopore and then feed the DNA strand through that. The quality of their ability to distinguish between the nucleotides is pretty high for single-nucleotide reads by any DNA-sequencing method. This increases the confidence that the team will eventually be able to develop a true sequencing system from this approach."

"It's very pleasing to see the new results," says Daniel Branton of Harvard University, who is developing nanopore DNA sequencing with solid-state materials. "This is the first time a clear, feasible pathway to nanopore sequencing has been shown. I would guess that within a year there will be a clear demonstration of actual DNA sequencing with a nanopore."

Stuart Lindsay of Arizona State University, an expert in single-molecule DNA sequencing, says Bayley and coworkers "certainly have a wonderful single-nucleotide detector technology, and this paper has raised it to new heights by making it much more reliable and by showing that nucleotide methylation can be detected, which is going to be of incredible medical importance."