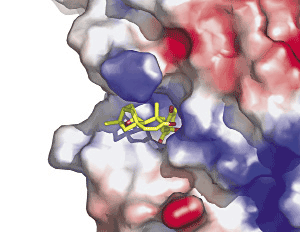 TWO YEARS AGO, the discovery of an antibiotic called platensimycin, which blocks fatty acid synthesis in many human bacterial pathogens, inspired teams of researchers to focus on blocking lipid production as a new antimicrobial strategy. Now, microbiologists are reporting that fatty acid synthesis may not be a suitable target for antimicrobial development because many pathogens can scavenge lipids from mammalian hosts.

"These findings seriously undermine the idea that inhibitors of bacterial fatty acid biosynthesis could fight infection," comments Eric D. Brown, a biochemist in the Antimicrobial Research Centre at McMaster University, in Hamilton, Ontario.

In the new work, Claire Poyart, a microbiologist at Paris Descartes University, in France, and her colleagues find that a who's who of Staphylococcus, Streptococcus, and Enterococcus species—including several multi-drug-resistant strains—overcome fatty-acid-synthesis inhibition when they are supplied with lipids by their in vitro or in vivo environment (Nature 2009, 458, 83).

"Human serum proves to be a highly effective source of fatty acids," Poyart notes, adding that the bacteria can also tap into lipids in the blood, brain, and liver of their animal host.

The study showed that, with access to lipids, bacteria could grow in the presence of two commercially available drugs that target fatty acid synthesis: cerulenin, which inhibits the same enzyme target as platensimycin, and triclosan.

The team also deleted key portions of the fatty-acid-synthesis machinery in Streptococcus agalactiae, which causes neonatal meningitis, and found that the bacteria could grow by scavenging lipids from the environment.

The team of researchers at Merck who initially reported platensimycin released a statement saying that the new results "are interesting, yet they represent an incomplete story due to the limited number of bacterial organisms and compounds that were studied in their in vivo work."

"One should not over-generalize," the Merck researchers note, that all pathogens are poor candidates for fatty acid synthase inhibition "until broader studies can be performed."