The science behind dual-purpose lenses 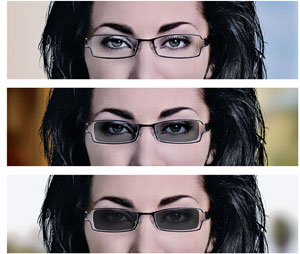 TWO-FOR-ONE EYEGLASS LENSES that darken when exposed to ultraviolet rays from the sun and return to their clear state indoors have come a long way since they were first invented in the 1960s. Early versions of these so-called photochromic lenses were plagued by slow darkening or lightening, and sometimes the lenses would get stuck midway. Newer models of the changeling spectacles are much quicker to activate and fade, and they come in both glass and lightweight plastic.

The first photochromic lenses were made of glass and developed by scientists in the U.S. at Corning. The company has made improvements to its original process over the years, but in general, the science remains the same, says Lionel M. Tanguy, a glass application engineer at Corning Ophthalmic, in France.

Glass photochromic lenses contain silver halide crystals embedded in a glass substrate. In the presence of UV-A light (wavelengths of 320–400 nm), electrons from the glass combine with the colorless silver cations to form elemental silver. Because elemental silver is visible, the lenses appear darker. Back in the shade, this reaction is reversed. The silver returns to its original ionic state, and the lenses become clear.

Although these lenses are still manufactured, the market for glass has dwindled since the commercialization of plastic photochromic lenses in the 1990s.

The chemistry of plastic photochromic lenses is completely different from that of glass. The first generation of plastic lenses relied on a family of organic dyes known as blue pyridobenzoxazines, says Chris Baldy, manager of photochromic performance testing at Transitions Optical, which produced some of the first plastic photochromic lenses. Subsequent generations used naphthopyrans, and today, Transitions makes its lenses with indenonaphthopyrans, Baldy says.

When a photochromic dye is exposed to UV radiation, a chemical bond is broken. The molecule then rearranges into a species that absorbs at longer wavelengths in the visible region, causing the lens to darken.

Improvements in the dyes over the years have led to faster activation and clearing, as well as longer lifetimes, Baldy says. For example, fusion of a bicyclic hydrocarbon group, called an indene group, to one of the benzene rings in a naphthopyran dye to make indenonaphthopyrans helps protect the dye from breaking down over time. 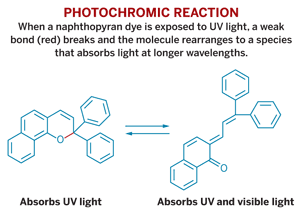 DYES ARE IMPORTANT, but they are only half the story. The lens material, which supports a layer of photochromic dyes, also affects how fast the lens darkens and fades, Baldy notes. Photochromic dyes do not work well in common plastic lens materials, so companies have developed special—but proprietary—monomers that are compatible with the dyes.

Currently, Transitions is one of several companies, including many in Asia and Europe, that market plastic photochromic lenses. The various companies' products employ a similar strategy for making photochromic dyes, but what sets them apart from one another is the composition of their respective lens materials.

Meanwhile, there are still a few holdouts for glass photochromic lenses. Even though the intrinsic heaviness of glass causes those distinguishing marks on the bridge of your nose, glass photochromic lenses offer better resistance to scratches and can faithfully switch between dark or clear for longer than their plastic lens counterparts. This is because glass lenses employ durable inorganic silver, whereas plastic lenses employ less robust organic dye molecules.

Although both glass and plastic photochromic lenses have come a long way, a common shortcoming is that neither works well for driving. The snag is that most automobile windshields have an inner layer of polyvinyl butyral that contains UV absorbers. Blocking the UV light prevents the activation of the lens darkening, leaving drivers squinting in the sun. Companies are continuing to design new dyes by adding various substituents that absorb more into the visible region to get more activity behind auto windshields. But for most owners of photochromic lenses, getting behind the wheel means they also have to get behind good old retro sunglasses.

Leslie Villarreal (June 23, 2016 1:31 AM)
YES! I recently had the lenses only changed out to transitions in a pair of glasses i had beed wearing for a while. For months i thought something was wrong with my eyes, I was on allergy medicine doctor gave be steroid drops for my eyes. My eyes burned and stung so bad i was in so much discomfort all the constant tearing, itching and rubbing made me miserable. Stopped wearing the transitions for a a week and everything was FINE .. put them back on again and immediately the problem had returned! It could not have been the frames, since i had worse them with out any trouble with clear lenses. My glasses didn't have nose pads. People need to be aware of this. Not every one can wear them. My lenses cost a small fortune too since i wear progressives.
Reply »

Chris Neptune (January 28, 2014 7:58 PM)
What about electrophotochromatic technology, adding electricity to the mix rendering the technology to be controlled by the user. Is there a product out there like that? If so, how is it feasible? Can the chemicals become infused in the glass and be electrically charged for control?
Reply »

Alan Miller (July 24, 2016 3:01 PM)
Yes. On Aliexpress.com there are sunglasses with a solar power cell and sensor in the middle. Thus they are said to respond completely in seconds, as opposed to the dye based lenses taking minutes. The fashion police, however, may disapprove :-)
Reply »

brian (January 3, 2016 10:29 AM)
Photochromic glass was invent by Dr Albert Wright, a ceramic expert when working for Pilkington Glass over 40 years ago.
Reply »

Mary Baker (January 12, 2017 12:21 PM)
I have a potassium dichromate allergy(chromate/chromium). I have a UV coating,I have been told not transsition lenses, but I have noticed lenses darken when a photo is taken. It seems since I have my frames (plastic) I have itchy eyes, lids,& nose skin breakouts. Could the photochromic lenses have the chromium ingredient in them?
Reply »