The View From New Jersey 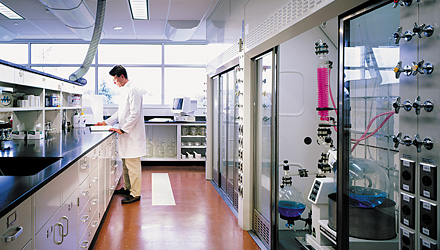 In the spring of 2003, Hovione opened a small-scale production facility in East Windsor, N.J. As its name implies, the $20 million Technology Transfer Center was intended as a place to develop customers' molecules before moving them to headquarters in Loures, Portugal, for scale-up. Given Hovione's target market of small to midsized drug companies, TTC was meant to boost business with U.S. biotech firms.

Six years later, David Hoffman, head of both TTC and the company's exclusive synthesis and particle-design businesses, is interested in bigger game. With its new multipurpose facility in Cork, Ireland, Hovione is ready to boost its business with major pharmaceutical companies.

"We will continue to serve as an introduction to Hovione for small pharma," Hoffman says of the New Jersey center. "But we also have the chance to start business relationships with big pharma."

Hoffman, who shuttles regularly between Loures, East Windsor, and now Cork, argues that the company is taking a risky but necessary step forward in its plan to increase the number of products it has in its pipeline at all stages of clinical development.

"We acquired Cork to drive dynamic growth," Hoffman says. "The only way to drive it is to get bigger. And to fuel the funnel, you have to increase the number of products in research or provide capacity to large pharma companies." He ticks off the names of drug firms that are favoring outsourcing. "Merck says they will outsource 25% of their production. AstraZeneca is no longer going to manufacture active pharmaceutical ingredients. And we know historically that GlaxoSmithKline outsources products. They are all doing it."

With 360 m3 of multipurpose manufacturing capacity in Loures and 90 m3 in Macau, both well utilized, Hovione didn't have much chance of gaining new business with big pharma, he notes. Cork, with 427 m3 of capacity, will allow Hovione to go after bigger projects.

"We weren't really ready to play when large pharma came looking for 100 m3 or 150 m3 for a project," Hoffman says. "But Cork brings us instant credibility in the game."

Still, how good of a fit is Hovione for the larger class of customer? Hoffman says the company will work much like it has for biotech customers—on a case-by-case basis. "Technology will likely be the greatest issue," he says, noting that Hovione is investigating new areas in biocatalysis and homogenous transition-metal catalysis. The firm recently took delivery on new spray-drying equipment in New Jersey.

"We have to change our mantra a little bit," Hoffman says. "The world recognizes we have done well in the small batch world, and a lot of biotech companies have gotten to know us. But we haven't been well aligned with pharma, and this is going to change."

Outsourcing
Carbogen Amcis to expand pharmaceutical services in Europe
Outsourcing
The rise and fall of the U.S. pharmaceutical chemical maker
Outsourcing
Cambrex to acquire dosage-form drug contractor Halo
Share X
To send an e-mail to multiple recipients, separate e-mail addresses with a comma, semicolon, or both.
Title: The View From New Jersey
Author: Rick Mullin
Chemical & Engineering News will not share your email address with any other person or company.