Direct-to-consumer companies are proliferating, raising questions about quality and lack of standards

SPIT KIT
[+]Enlarge
Credit: 23andMe
There’s no risk involved in collecting a saliva sample for DNA testing, but secondary risks like misuse of the results worry some people. 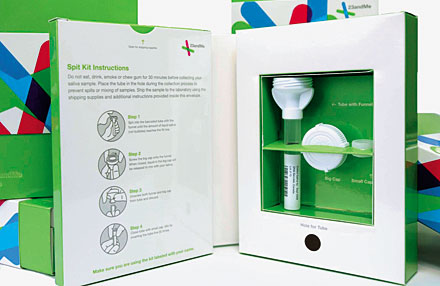 Credit: 23andMe
There’s no risk involved in collecting a saliva sample for DNA testing, but secondary risks like misuse of the results worry some people.

As the cost of genomic sequencing plunges, dozens of companies are popping up on the Internet, hoping to cash in on the increasing demand for personal genetic information. For a few hundred dollars, consumers can spit into a collection device and send their saliva sample to obtain a personalized genetic profile that will tell them about their ancestry, their risk of developing particular diseases, and various traits like their food preferences or athletic ability.

But an increasing number of people are raising concerns about these direct-to-consumer (DTC) genetic tests and are calling for more government oversight. They question the technical performance of the tests, their clinical utility, and the likelihood that they will make a difference in an individual’s health. Some also worry about privacy and who should have access to a person’s genetic information.

At a two-day workshop earlier this month, sponsored jointly by the National Academy of Sciences and the Institute of Medicine, experts grappled with the technical and social issues related to personal genomics—a field that is changing rapidly. Opinions varied over the usefulness of genetic information for estimating the risk of common diseases today, but nearly all participants agreed that such information has the potential to play an important role in health care down the road.

The Food & Drug Administration has the authority to regulate genetic tests as medical devices, but the agency decided years ago not to regulate any laboratory-developed tests—those produced by a single lab for use only in that lab. Many genetic tests fall into that category.

With the rapid growth of DTC genetic testing, the situation is much different today from when FDA made that decision, Courtney Harper, acting director of the Division of Chemistry & Toxicology Devices at FDA’s Center for Devices & Radiological Health, noted at the workshop. FDA’s long-standing policy for these in vitro diagnostic (IVD) tests hasn’t changed, but the agency is seriously considering it, she said. For now, “FDA will take action if patients are being put at risk.”

FDA’s policy “results in a nonlevel playing field for IVD manufacturers,” Harper acknowledged. Some IVDs are considered test kits and must undergo FDA review prior to marketing, whereas others are lab-developed tests that enter the market without review. Test kits are typically purchased by a lab as a package of reagents with instructions on how to perform the test. Lab-developed tests are created in-house with various reagents and protocols.

Genetic tests may not be federally regulated, but the labs that conduct them are. Specifically, such labs are regulated under the Clinical Laboratory Improvement Amendments of 1988 (CLIA) by the Centers for Medicare & Medicaid Services (CMS) in the Department of Health & Human Services (HHS). The law requires all clinical laboratories, including genetic-testing labs, to undergo proficiency testing to determine whether they can accurately measure specific analytes in unknown samples sent to the labs by HHS-approved providers.

But CLIA regulations were set up long before genetic testing was commonplace. “Current regulation requires formal proficiency testing for only 82 analytes. None of those analytes are for genetic testing,” pointed out Andrea Ferreira-Gonzalez, a professor of pathology and director of the Molecular Diagnostics Laboratory at Virginia Commonwealth University.

Because of the fragmented and complex regulatory environment for DTC genetic testing, the quality of tests varies from one lab to another. Consumers don’t have a reliable way of knowing which labs are good and which ones are not, participants noted. In addition, even when the genotyping is accurate, the interpretation of the results varies from one service to another.

Another area of concern that stimulated discussion at the workshop is the validity of claims made by some DTC genetic-testing companies. For example, 23andMe, a California-based DTC genetic-testing service, promises to provide customers with an analysis of their risk for 116 diseases and traits, including breast cancer, rheumatoid arthritis, and type 2 diabetes, as well as information about their ancestry. Such claims are not independently verified by an external source, Harper said.

Other participants at the workshop agreed that such claims are misleading to consumers. Several people called for more enforcement by the Federal Trade Commission and FDA.

Patricia Ganz, professor of health services and medicine at the University of California, Los Angeles, highlighted the disclaimer that 23andMe provides on its website. “Information you learn from 23andMe is not designed to diagnose, prevent, or treat any condition or disease or to ascertain the state of your health … 23andMe services are intended for educational, informational, and research purposes only.” Such disclaimers are often buried in the fine print, and consumers often don’t see them, Ganz noted.

“Regardless of these disclaimers, what they are doing, in our opinion, is medical testing,” Harper said, adding that this is one reason why FDA is reconsidering regulating lab-developed tests. To get a better handle on genetic tests, FDA is beefing up its staff. The agency added 20 new positions this year to form a new personalized medicine group, Harper noted. The new group is being led by genomics expert Elizabeth Mansfield, who has held both science and policy positions at FDA and in industry.

During the workshop, K. David Becker, chief scientific officer of the California-based genetic-testing company Pathway Genomics, said his company is in favor of a common set of federal standards because it is difficult to meet the requirements of all of the states. Representatives from other companies expressed similar support for one set of standards.

DTC genetic-testing companies are Internet based and offer their services in multiple countries, which only complicates the regulatory environment that manufacturers have to navigate. “DTC genetic testing is an international market. How does one regulate it with national guidelines?” Timothy J. Aitman, professor of clinical and molecular genetics at Imperial College London, asked at the workshop.

Aitman highlighted the U.K. government’s Common Framework of Principles for DTC genetic tests, which was released earlier this month. The framework was developed by an international working group supported by the Human Genetics Commission (HGC), an advisory body to the U.K. government.

HGC is hoping that DTC genetic-testing companies around the world will adopt the principles. The document addresses analytical validity of genetic tests, pre- and posttest counseling, guidelines on advertising, promotional claims, informed consent, genetic testing of children, and steps to ensure that the sample came from the person identified as the provider. HGC is accepting public comments on the framework until Dec. 6.

One difference between the U.K. and the U.S., as pointed out by Aitman, is that the U.K. has a law—the Human Tissue Act of 2004—that makes the misuse of genetic information a criminal offense, punishable with a fine and up to three years in prison. The law was passed to protect individuals from “DNA theft,” or nonconsensual analysis of their DNA, Aitman noted. It prevents someone from stealing another person’s DNA from a coffee cup or single strand of hair and extracting traits from it to embarrass the person, particularly a high-profile individual. The U.S. has no comparable law.

Privacy issues were brought up numerous times during the workshop. Susannah Baruch, policy director of Generations Ahead, a California-based nonprofit dedicated to socially responsible genetics, warned consumers to read and understand a company’s privacy policy before they agree to genetic testing.

But problems can occur even when companies have good privacy policies because of gaps in the Genetic Information Nondiscrimination Act (GINA), a U.S. law that aims to protect privacy and prevent discrimination by health insurers and employers, Baruch noted.

Another problem is that most physicians aren’t trained to deal with genetic data. Although some DTC genetic-testing companies offer free genetic counseling services, few patients take advantage of them, said Elissa Levin, director of genetic counseling at California-based Navigenics.

The potential for genetic testing to exacerbate disparities in health care also came up at the meeting. Insurance companies currently don’t cover such tests, so only those who can afford the testing will benefit from it, Ganz noted.

Ganz pointed out that younger, well-educated, Internet-savvy social networkers seem to be the most likely to use DTC genetic-testing services, Ganz said. In a survey sponsored by the Centers for Disease Control & Prevention last year, only 22% of respondents were aware of DTC genetic testing and only 0.3% had ever used a DTC genetic-testing service, added Katrina Goddard, a senior investigator at Kaiser Permanente Center for Health Research.

Genetic variants associated with an increased risk of developing a particular disease are showing up almost daily in the scientific literature. DTC genetic-testing companies are constantly updating their databases and algorithms as new discoveries are made. When asked whether customers get updated reports that incorporate new information, representatives from two companies—Navigenics and Genomic Pathways—told workshop participants that they do offer regular updates every few months. That pleased many participants, who said that such services should keep providing customers with new information for the rest of their lives.

“At this point in time, there is a certain amount of validated genetic markers that you can report on, and that is only going to expand,” Levin said. Genetic testing is an “ongoing education and discovery process for the individual in terms of understanding what their DNA is saying.”