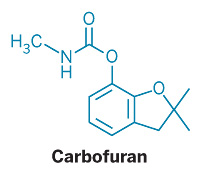 EPA is preparing to implement a final rule that will ban carbofuran residues on all foods sold in the U.S., including imports, effective Dec. 31. The agency denied a request from FMC Corp., the sole manufacturer of carbofuran in the U.S., for an administrative hearing to prove the safety of the neurotoxic pesticide. EPA has determined that current dietary exposures to carbofuran are not safe. "The evidence is clear that carbofuran does not meet today's rigorous food-safety standards," Steve Owens, assistant administrator for EPA's Office of Prevention, Pesticides & Toxic Substances, said in a statement. FMC voluntarily withdrew 22 uses of the pesticide in 2008, but the six remaining uses on four food crops and two nonfood crops raised concerns for EPA. The agency is expected to eventually eliminate all uses of carbofuran once it finalizes the ban on food residues. By tackling the residues first, EPA can eliminate the pesticide from the market sooner than it can through the normal process of canceling a pesticide's registration.