Precious Products
[+]Enlarge
Credit: Shutterstock
Olive oil is in such high demand that some products are fraudulent. 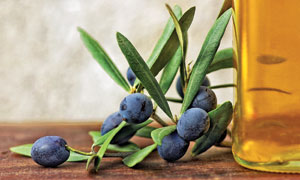 Credit: Shutterstock
Olive oil is in such high demand that some products are fraudulent.

OLIVE OIL is serious business in Italy. Although people outside the country may consider a preference for extra-virgin olive oil as evidence of a refined palate, locals take things a step further, discussing the relative merits of olive cultivars such as Canino or Ogliarola, which differ in some genes by only a few base pairs.

Then there's the financial side of things: Because olive oil can sell at a high price, the country, and indeed all of Europe, battles olive oil fraud. In the late '90s, adulteration of olive oil with hazelnut, soybean, and other oil became such an issue that the European Union set up an antifraud task force to examine the problem.

To catch adulterant ingredients or to authenticate upscale products, one of the best strategies is to look for the presence of DNA from an unwelcome additive—such as hazelnut or a low-quality olive varietal, says Stefano Sforza, an organic and food chemist at the University of Parma.

There is a bounty of other reasons that scientists such as Sforza want to search for DNA in food: These studies can reveal the presence of bacterial contaminants and allergens, such as nuts or seafood. Or they can disclose the use of genetically modified organisms (GMOs), the commercial use of which is a touchy issue in Europe.

Increasingly, food scientists are also being asked to use genetic sequences to help authenticate the geographical provenance of food, to verify products with protected labels such as Parma ham or Champagne, or to justify hopes for a new label.

The first step, according to Sforza, is to track down unique DNA sequences for the plant, animal, or microbe you want to detect. The current gold-standard technique for detecting these DNA sequences in food is to employ the polymerase chain reaction. Using PCR, scientists try to amplify sequences of suspect DNA in food to discern contaminants or substitutions.

Although PCR is widely used in the food industry, the technique is not always perfect. "Real-time PCR can quantitate a few molecules of DNA in optimal conditions, but food is basically anything but optimal," Sforza says.

Besides the difficulty of dealing with tricky, diverse matrices (think tomato sauce, chocolate, or biscuits), some constituents in food such as polyphenols or calcium can inhibit the enzymes required for PCR. Also, food processing wreaks havoc with the DNA present in food, so the fingerprint sequences of suspect ingredients can be present in extremely low quality and quantity. Because of all these challenges, PCR analysis of food can lead to both false positives and negatives.

So Sforza and his Parma coworkers Rosangela Marchelli and Roberto Corradini decided to apply peptide nucleic acids (PNAs)—which are more commonly studied for medical applications—for use in the food industry. Their hope is to exploit the ability of PNAs to hybridize with DNA as an additional tool to support and complement the results obtained by PCR.

PNAS ARE HYBRIDS between DNA and proteins. Like DNA, PNAs have a primary backbone bearing purine and pyrimidine bases that can hydrogen bond with complementary bases. However, instead of the deoxyribose backbone of DNA, PNAs have a pseudopeptide backbone.

The main benefit of PNAs is that they bind DNA tighter than DNA can bind itself, Sforza explains. This is because neutral or positively charged PNAs sidestep the electrostatic repulsion between two strands of negatively charged DNA. As such, short sequences of eight to 12 PNA base pairs can more selectively and sensitively bind DNA&nbsp;than say, the 15- to 20-base-pair "primer" sequences required for PCR.

In particular, the team has found that making its PNAs chiral and positively charged improves DNA selectivity and affinity, which improves recognition in difficult matrices such as food. To observe the PNA and DNA pairs, the Parma team has employed a variety of detection techniques, such as high-performance liquid chromatography, surface plasmon resonance, and microarrays, in combination with PNAs that fluoresce when bound to DNA.

DNA grabber
[+]Enlarge
Positively charged PNAs, such as this arginine-derivatized one, bind DNA selectively and sensitively. 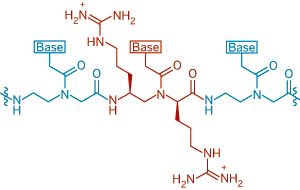 Positively charged PNAs, such as this arginine-derivatized one, bind DNA selectively and sensitively.

Although the PNAs can bind suspect sequences of DNA in food better than PCR primers, PNA-DNA hybrids have provided similar levels of signal as PCR in only a few applications, Sforza says.

Still, the PNA technique seems "like a promising tool" to develop for eventual quantitative analysis of DNA in food, says Josef Schlatter, the head of the Nutritional & Toxicological Risks Section at the Swiss Federal Office of Public Health.

The PNA approach is already gaining traction in the Italian food industry, Sforza says. For example, his team is working on the authentication of olive and tomato varietals perceived to have singular and exceptional flavors.

According to Reto Battaglia, a chemist and food safety consultant based in Gossau, Switzerland, some people in Europe get "wild and crazy" about authentication for their local products. Take tomatoes, he says. Some Italian varietals, such as San Marzano, sell at higher prices, even in their canned form, because the tomatoes are thought to have an appealing bittersweet taste.

Although production of appealing tastes and aromas is sometimes more influenced by the weather during a particular growing season than slight genetic differences among closely related varieties, people want a way to "upgrade a tomato" if they can, Battaglia says.

Sforza agrees that "DNA is only part of the story" and that genetic markers used to identify a food's geographical origin, and therefore its authenticity, may not relate to flavor molecules produced during the growing season. But, he says, "I feel my work is to provide the consumer with tools that give confidence that products labeled as San Marzano-varietal tomatoes are in fact San Marzano, or that Canino-varietal olive oil is in fact Canino. Consumers can decide whether they like the taste."