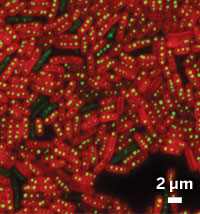 When it comes to carbon fixation, blue-green algae really have all their ducks in a row. These single-celled factories play a big role in the global carbon cycle, and by arranging the enzyme compartments they use to convert CO2 to carbohydrate precursors in a straight line, they ensure they are at their most efficient, researchers at Harvard Medical School have found (Science 2010, 327, 1258). Pamela A. Silver and colleagues added fluorescent tags to the compartments’ shell protein and some of its enzyme contents and watched what happened inside blue-green algae. The enzyme-filled compartments ended up spaced evenly along the long axis of the algae, with roughly four compartments per cell. When the researchers mutated a cytoskeletal protein known as ParA, it disrupted that tidy arrangement and made the algae’s carbon fixation process less efficient. In addition, the disorganized compartments in the mutant algae didn't get evenly distributed to daughter algae cells. The researchers suggest that ParA mediates connections between neighboring compartments and that algae might have evolved this single-file strategy to ensure no daughter cell gets short shrift.