FACE-LIFT
[+]Enlarge
Credit: Amitav Sen
Any changes to the DSM are likely to reverberate throughout the drug industry. 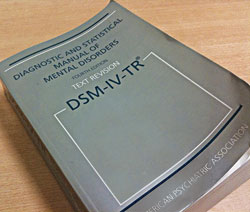 Credit: Amitav Sen
Any changes to the DSM are likely to reverberate throughout the drug industry.

The first potential revisions in more than a decade to an influential psychiatry manual are on the table, and drugmakers are taking notice.

Any changes to the manual, known as the Diagnostic & Statistical Manual of Mental Disorders, that are adopted are likely to have an effect on how medications for the brain reach the market and are prescribed. The DSM has a reputation as the dictionary of mental health, and physicians, scientists, and insurers alike use it to determine what counts as a mental disorder and how patients should be treated.

Among other things, the DSM helps companies select clinical trial endpoints—a measure of efficacy—and maps out unmet medical needs, explains David Bredt, vice president of neuroscience discovery and clinical research at Eli Lilly & Co. “This will impact most all that we do in psychiatric drug development,” he says.

Four editions of the DSM have been published by the American Psychiatric Association, most recently in the mid-1990s. In preparation for the fifth edition, set to come out in 2013, APA convened a task force of neurologists, psychologists, and psychiatrists to recommend revisions. Their proposed overhaul was released on Feb. 10 and has already generated mountains of commentary and criticism from experts and advocacy groups.

The task force’s proposed changes affect how some disorders, including substance abuse and Asperger’s syndrome, are classified. They also suggest new diagnoses, including “binge-eating disorder,” which is distinct from bulimia in that binge eaters don’t purge. Another is “temper dysregulation disorder with dysphoria,” a childhood behavioral diagnosis that could recategorize and perhaps change treatments for some children who had been diagnosed with bipolar disorder.

The proposed changes are available for comment from the general public at DSM5.org until April 20. APA will conduct field trials for two years prior to publication.

Some critics of the DSM-5 process claim that members of the task force might be influenced by their financial ties to drug companies. “That’s simply not the case,” says Michael B. First, a psychiatry professor at Columbia University who worked on the fourth edition of the DSM but is not involved with the fifth.

First, who says he has financial connections to companies developing psychiatric drugs, including Cephalon and Novartis, notes that DSM-5 task force members had to disclose their ties at DSM5.org and limit their annual income from all industry sources to $10,000. During preparation of the current DSM, between 1989 and 1994, that requirement didn’t exist, he says, but conflict of interest wasn’t on health professionals’ radar then to the extent that it is now. The people working on the DSM-5 are in it to help patients, and although it’s true that the drug industry is likely to benefit as a side effect of the revisions, safeguards have been taken to try to prevent undue influence from companies, he says.

Not all of the proposed revisions have a direct impact on pharmaceutical makers because some mental health problems aren’t usually treated with medication, First continues. “The new disorders that are being proposed are likely to have the most impact in the sense that they create a new market,” he says. For instance, there is some evidence that selective serotonin reuptake inhibitors, which are typically used as antidepressants, reduce the frequency of binge eating in patients with bulimia, he says. “It’s not a huge leap” to think that such drugs might also benefit patients with the newly proposed binge-eating disorder, he adds.

The revisions being considered suggest doing away with the category of substance abuse, considered a milder affliction, and folding it in with substance dependence into a new category, “addiction and related disorders.” For example, the new guidelines would recategorize a person with tolerance to alcohol plus two arrests for driving under the influence as alcohol dependent, a diagnosis that increases the likelihood that the person would get medical treatment, Ehrich says.

For a chemist involved in drug discovery, the DSM-5’s impact won’t be immediate, explains Torsten M. Madsen, a divisional director at Danish drugmaker Lundbeck. “It’s not that when I look down the list of proposed changes, I think ‘Hey, wow, we hadn’t thought of that—let’s make a drug for that.’ That’s not really the way it works,” he says. Nor is examining the DSM-5 going to help chemists go back to their labs and cook up new molecules for a newly proposed disorder. The DSM-5’s value will be in the insights it provides at the clinical level, he says.

Lilly’s Bredt agrees. “As disorders become better defined by a variety of criteria, this helps us to understand how to enroll appropriate patients in our trials, to figure out which patients might benefit most from our specific medicine,” he says.

Madsen encourages researchers to take the long view. Ultimately, “the more we know about psychiatric disorders, the better chance we have of finding treatments for them,” he says.

Neuroscience
Ketamine is revolutionizing antidepressant research, but we still don’t know how it works
Neuroscience
Ketamine may produce antidepressant effects through opioid receptors
Neuroscience
Psychedelics forge connections between neurons
Share X
To send an e-mail to multiple recipients, separate e-mail addresses with a comma, semicolon, or both.
Title: Eye On Mental Health Bible
Author: Carmen Drahl
Chemical & Engineering News will not share your email address with any other person or company.