What's wasabi, and is your fiery buzz legit?

In most restaurants, horseradish stands in for the real thing 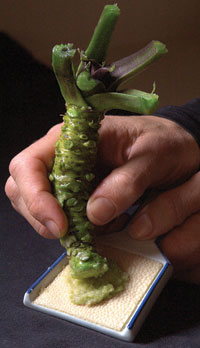 Because no sushi experience would be complete without that dollop of wasabi adding its zing, it may come as a surprise that most sushi lovers have never eaten real wasabi.

The pistachio-green paste on your plate might be called wasabi, but it’s most likely just a mix of European horseradish, mustard, and food coloring. Even in Japan, the home of wasabi, the real thing is in short supply.

“Real” wasabi comes from the rootlike stem, or rhizome (think of fresh ginger), of Wasabia japonica. As a member of the Cruciferae family, it is related to such plants as cabbage, cauliflower, broccoli, and mustard. Its distant cousin European horseradish (Armoracia rusticana) often pinch-hits for it in culinary uses.

Wasabi grows naturally in mountain streambeds, and the Japanese have cultivated it for more than a millennium. Wasabi grown in semiaquatic conditions is known as sawa, whereas wasabi grown in fields is called oka. The stream-grown wasabi produces larger rhizomes and is generally considered to be of higher quality.

Unlike horseradish-based stand-ins, the heat of real wasabi dissipates quickly because of the volatility of the flavor components. “If you take imitation wasabi powder and add water, you can leave that almost overnight and it will still be hot,” says Brian Oates, president and chief scientific officer of Pacific Coast Wasabi, in Vancouver, British Columbia. “With wasabi, when you grate it up, it’s only good for, at most, 15 minutes.” The components of both wasabi and horseradish can be stabilized by acids, such as vinegar or lemon juice.

The key chemicals that give wasabi its characteristic heat and flavor aren’t present until the wasabi is macerated. When the cell wall is disrupted, it releases the enzyme myrosinase, which hydrolyzes glucosinolates, a group of sulfur-containing glucose derivatives, to produce isothiocyanates that provide wasabi’s spicy zing. The most abundant of these is allyl isothiocyanate. 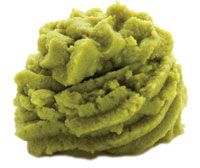 Credit: Shutterstock
Typical wasabi pastes are made from horseradish, mustard, and food coloring.

“Horseradish has a different profile of isothiocyanates, and it is possible to taste the difference,” says Geoffrey P. Savage, an associate professor in the food group at Lincoln University, in Canterbury, New Zealand. “The problem is that not many people have tasted the original taste of wasabi, so they don’t know what they are tasting.”

One of the by-products of the myrosinase reaction is glucose. “You get a little bit of sweetness,” Oates says. “Sometimes, I find it so hot that I don’t know how anybody can detect the sweetness.”

The flavor is affected by how finely the wasabi is grated. The traditional way to grate wasabi is with a sharkskin grater, called an oroshi, which resembles fine sandpaper. Because the flavor and heat dissipate so rapidly, it’s best to grate it as you need it. “If you’re sitting at a restaurant, you have your rhizome and your own grater,” Oates says.

It might sound like it would be impossible to make a commercial product with real wasabi, but that’s not the case, Oates says. “If you take the fresh stuff and simply freeze it and then freeze-dry it, you keep the enzyme and the substrate separate. They don’t get a chance to interact.”

In addition to its culinary uses, scientists have started investigating wasabi’s isothiocyanates, particularly 6-methylsulfinylhexyl isothiocyanate, for possible medicinal uses. It is thought to alleviate symptoms in a number of disorders, including allergies, asthma, cancer, inflammation, and neurodegenerative diseases, Oates says. 6-Methylsulfinylhexyl isothiocyanate is believed to act on a transcription factor known as Nrf2 that is involved in the antioxidant response.

One of the challenges with wasabi is that it is difficult to cultivate. Pacific Coast has begun cultivating sawa wasabi in greenhouses for the high-end culinary markets and oka wasabi for the nutraceutical market. Pacific Coast and other companies such as Coppersfolly, in Canterbury, New Zealand; Pacific Farms, in Florence, Ore.; and Real Wasabi, in Bluffton, S.C., are among the companies providing products made with real wasabi. Pacific Coast sells fresh and freeze-dried wasabi rhizomes; Coppersfolly sells a jarred wasabi paste; Pacific Farms sells fresh rhizomes and tubes of wasabi paste; and Real Wasabi sells rhizomes, wasabi powder, and other condiments flavored with wasabi. Maybe sushi lovers will finally be able to taste the real deal.

UPDATE: This article was modified on August 9, 2017 to refresh its information and data.

Share X
To send an e-mail to multiple recipients, separate e-mail addresses with a comma, semicolon, or both.
Title: What's wasabi, and is your fiery buzz legit?
Author: Celia Henry Arnaud
Chemical & Engineering News will not share your email address with any other person or company.

Anonymous (October 20, 2013 3:16 PM)
Your breasts get smaller and smaller and then your reproductive organ closes
Reply »

Donovan Reeves (February 2, 2012 7:45 PM)
What in the world is the transcription factor? "second paragraph from the bottom"
Reply »

Michel Van Mellaerts (July 2, 2013 3:46 AM)
Interesting that no mention was made of New Zealand wasabi (www.wasabi.co.nz) who started the medical use of Wasabia japonica in 1990. Their story is on the above website, with more information on wasabi to be found on www.wasabi.org.

True Wasabia japonica (not the coloured horseradish) is being used more and more in the medical field and foods. The Food Safety organizations are coming down hard on horseradish/mustard mixes as the allergen - mustard, is not normally declared.
Reply »

katrina Darden (December 26, 2013 11:37 PM)
Please enlighten me on the effect wasabi has on cancer cells and if so ,how may it be obtained and used
Reply »