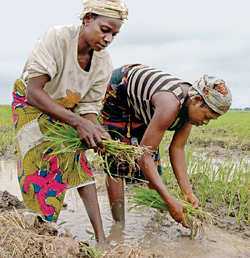 Credit: Jide Adeniyi-Jones/USAID
Farmers in northern Nigeria are increasing rice production with help from the U.S.

Food production will have to increase 70% by 2050 to feed a growing and increasingly affluent world population, according to the United Nations Food & Agriculture Organization (FAO). To help meet the projected demand for food, both the private sector and governments around the world are investing in research that will increase crop yields.

Feeding the world is complex, however, and some experts predict it will get more challenging in the face of climate change and decreasing natural resources. FAO estimates that there are already more than 1 billion undernourished people worldwide. At the same time, global obesity has reached epidemic proportions.

In the U.S., the importance of boosting food production has caught the attention of both the public and private sector as evidenced by three separate meetings held in Washington, D.C., this month. The meetings involved discussions about various U.S. R&D efforts to tackle this growing problem as well as what more the nation can do to help.

For most Americans, however, food security—or access to sufficient, safe, and nutritious food—is something rarely considered. But undernourishment is a U.S. problem as well as a global one. According to the U.S. Department of Agriculture, in 2008, nearly 15% of households in the U.S. had low or very low food security.

As a result, the Obama Administration has made food security a priority, with an increased emphasis on rural prosperity and rural development, according to Roger N. Beachy, director of the National Institute of Food & Agriculture (NIFA), USDA’s agency that helps fund extramural competitive research grants.

Over the next year, NIFA will support research that focuses on some of society’s biggest challenges, such as adapting plants to any given growing condition, Beachy noted at a March 12 meeting of the President’s Council of Advisors on Science & Technology (PCAST). The council advises the White House on science and technology matters.

Beachy is a world-renowned plant scientist and the founding president of the Donald Danforth Plant Science Center, in St. Louis. He joined USDA as the first director of NIFA last fall (C&EN, Oct. 26, 2009, page 22).

As part of his vision to transform NIFA into a 21st-century life sciences agency, Beachy has pledged to collaborate more with other federal agencies. For example, Beachy recently met with Francis S. Collins, director of the National Institutes of Health, to brainstorm how to tie agriculture and nutrition into global health issues like obesity. USDA is also working with the National Science Foundation and the Department of Energy to model the effects of climate change on agriculture (see page 17).

Robert Paarlberg, a professor of political science at Wellesley College and an associate at Harvard University’s Weatherhead Center for International Affairs, provided PCAST members with a more global perspective on food security. Paarlberg has written about the lack of farming productivity in sub-Saharan Africa and advocates what he calls “science-intensive farming” or “precision farming.”

Approximately 300 million people in sub-Saharan Africa are undernourished, and that number will increase 30% in the next decade, Paarlberg pointed out. The reason why productivity is so low there, he said, is because “most farmers don’t use modern seed varieties or nitrogen fertilizers, only 4% have irrigation, most have no veterinary medicines for farm animals, and there is almost no power in the countryside.”

Paarlberg recommended that PCAST commission a study to examine sources of R&D and rates of innovation for technologies such as bioengineering, GPS, geographic information systems, remote-sensing systems, and robotics. He suggested that the study look at whether such technologies can be taken up by farmers in underdeveloped countries or only by highly specialized farmers in rich countries. “The biological technologies should be easily extendable to small farmers,” he said.

Many factors, however, prevent modern technology from reaching developing countries. For example, “it’s illegal to plant genetically modified seeds in most of Africa,” Paarlberg noted. “It’s not even legal to do research” on such seeds there, he added.

Another problem has to do with the lack of infrastructure, including roads, in many developing nations. Increasing crop yields will do little good if farmers are unable to get their crops to market, Rep. Rosa L. DeLauro (D-Conn.), chair of the House Agriculture, Rural Development, FDA & Related Agencies’ Appropriations Subcommittee, pointed out during a March 11 congressional hearing.

At the hearing, DeLauro suggested streamlining and consolidating global food security efforts into one federal agency, such as the U.S. Agency for International Development (USAID) or USDA. This is something she has also been calling for with respect to food safety for many years.

Some of the challenges in getting technology to developing countries were also brought up at a food summit sponsored by the magazine the Atlantic earlier this month. During a discussion on how to feed the world, Hafez Ghanem, assistant director-general of economic and social development at FAO, pointed out that China, Brazil, and India are the only developing countries investing in R&D to increase crop yields. South Asia, North Africa, and the Middle East are not investing and will remain deficient, he said.

It is critical to focus on empowering farmers to be self-sufficient, noted Thomas A. Daschle, senior policy adviser at the legal firm DLA Piper and a former Democratic senator from South Dakota. To do that will require a well-functioning marketplace and application of the best science and technology, he said at the summit.

Daschle is the chair of DuPont’s Committee on Agricultural Innovation & Productivity for the 21st Century. The committee was formed last month to examine how public policy can ensure that farmers worldwide have the tools they need to meet food demands. DuPont is just one of many companies—including BASF, Monsanto, Syngenta, and Bayer CropScience—investing in agriculture R&D to improve crop yields (C&EN, Oct. 20, 2008, page 30).

Joshua Viertel, president of Slow Food USA, agrees that farmers need to be empowered to grow their own food, but he expressed concern at the summit that some companies see the food gap as a market opportunity. Slow Food is a grassroots movement committed to nutritious, sustainably grown food. Companies investing in genetically modified crops are more interested in making a profit than in solving world hunger, Viertel said. Farmers in the developing world can’t afford expensive biotech seeds, he stressed.

Viertel suggested focusing on finding low-cost inputs that are locally available—for example, growing crops such as alfalfa or legumes to fix nitrogen. He agreed that it is essential to provide farmers with access to good technologies, as long as it doesn’t take big investments.

Exactly what role science and technology will play in meeting future food demand is unclear, but both will likely be essential. Governments should be open to all options, FAO’s Ghanem stressed. Genetically engineered crops have been successful in India, he said, and “we should apply existing technologies before going to new ones.”

Pollution
Satellites can now see air pollution inequality within cities
Persistent Pollutants
Goodbye to some PFAS in food packaging
Pollution
Mercury makes it deep into marine trenches
Share X
To send an e-mail to multiple recipients, separate e-mail addresses with a comma, semicolon, or both.
Title: Feeding The World
Author: Britt E. Erickson
Chemical & Engineering News will not share your email address with any other person or company.