by Aaron A. Rowe

IMITATION INTESTINE
[+]Enlarge
Credit: John March
March and his team patterned PDMS in an acrylic mold to give it tiny protrusions that closely resemble villi. 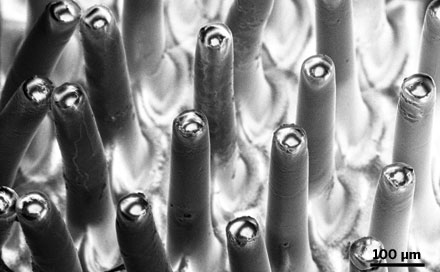 Credit: John March
March and his team patterned PDMS in an acrylic mold to give it tiny protrusions that closely resemble villi.

An imitation intestine, made from molded polymers and human cells, could be used by biochemists who want to study the interplay between digestive tissue and gut bacteria. The inventors, Jiajie Yu, John March, and their colleagues at Cornell University, hope to produce the fake tissue in bulk to make it available for further research.

Every square millimeter of the imitation organ has dozens of tiny protrusions, which resemble the villi that give natural intestines their high surface area and unique texture, March said during an oral presentation this week at the ACS national meeting in San Francisco. The material, he said, could make it possible to carry out what would amount to high-throughput experiments with lots of intestines.

CELLS ON BUMPS
[+]Enlarge
Credit: John March
Human carcinoma cells grow atop a PDMS polymer scaffold that is textured to resemble the inner surface of a small intestine. 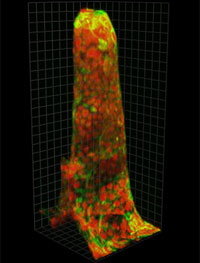 Credit: John March
Human carcinoma cells grow atop a PDMS polymer scaffold that is textured to resemble the inner surface of a small intestine.

March and coworkers began making mock entrails by impregnating textured sheets of polydimethylsiloxane (PDMS) rubber with human carcinoma cells. After some initial experiments, they switched to coating the scaffold material with rat intestinal stem cells, but those cells don't properly differentiate on the synthetic material. In an effort to remedy that problem, March is switching to a new scaffold material (collagen), tissue culture protocol, and cell type.

March said his group hopes to use imitation intestines to create new strains of gut bacteria that will change color or release medicinal compounds in response to cues from their human hosts. For instance, a person who is suffering from a flare-up of cardiovascular disease will produce biomarker molecules that make their way into the digestive tract. March would like to design bacteria that change color in response to those signals. If people carrying those engineered bacteria become ill, their stools would change color, warning them that they need to see a doctor.