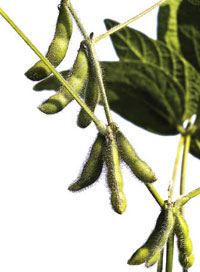 Credit: Shutterstock
USDA has authorized engineered soybeans that are high in oleic acid.

The U.S. Department of Agriculture has given the green light to Pioneer Hi-Bred’s Plenish—genetically modified soybeans that contain high levels of oleic acid. According to Pioneer, the soybeans contain the highest level of oleic acid of any soybean under commercial development. Oleic acid increases the stability of soybean oil and provides more flexibility in food applications. Cooking oils made from the genetically modified soybeans contain 20% less saturated fat than traditional soybean oil and no trans fat, the company claims. “We continue to see solid results and strong interest from food companies looking for a soybean oil with consumer benefits and functionality,” says Craig F. Binetti, president of nutrition and health at DuPont, Pioneer’s parent company. Oils made from soybeans with high levels of oleic acid also offer heat stability, which could allow companies to develop biobased renewable alternatives to petroleum-based products, such as lubricants and adhesives. The soybeans will be grown in the U.S. and Canada under contract for field and oil testing this year and in 2011, with the possibility of full commercialization by 2012.